Should mountain biking be included in wilderness areas? • Earth.com 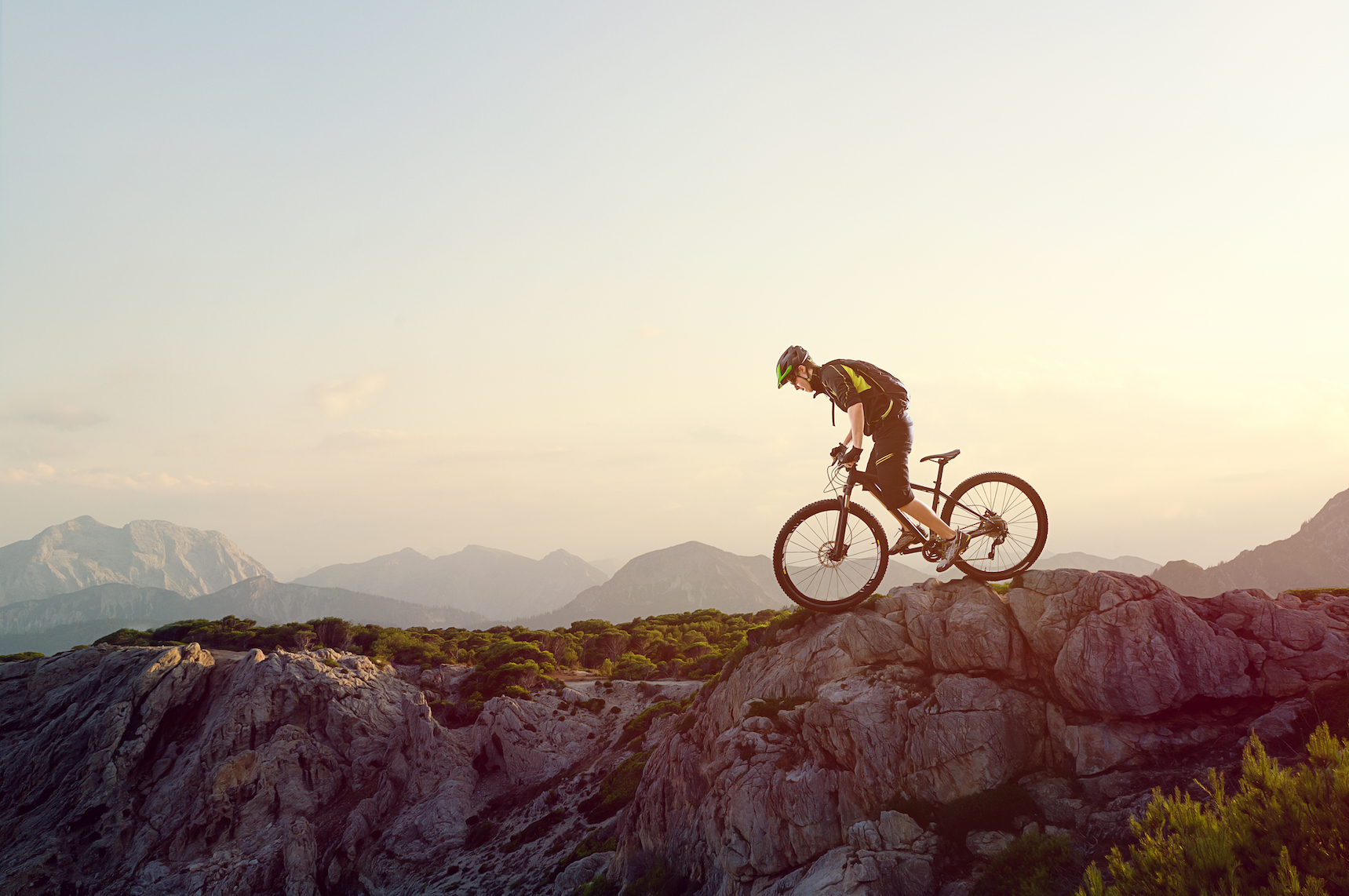 Should mountain biking be included in wilderness areas?

Over a decade ago, I was a mountain biking director at a summer camp in South Dakota right out of high school.  By that time, I’d ridden the Kokopelli Trail in Moab piece by piece. The Kokopelli Trail is 139 miles long; 15% of which is single track, much of the rest of which is shared with off road Jeeps and ATVs.  I’d also done a handful of rides both on and off roads in Colorado. I’d been biking enough to enjoy it, but I wasn’t then and am not now an expert at mountain biking, just good enough to take a few kids on rides and teach the basics.

I learned early on that there was a strange conundrum involved in mountain biking unlike few other sports.  I went on a field trip in a high school environmental science class to a controversial wilderness study area.  The sandstone on trails in the area was clearly scored by hundreds or thousands of mountain bike tires, to the point of being rutted into the exact size of a bike tire track.  If the area became a wilderness area, it would mean banning bikers forever. That’s the heart of the strange conflict of interest involved in mountain biking, the Wilderness Act of 1964 is clear about banning bikes in Section 4 C, “there shall be…no use of motor vehicles, motorized equipment”…and “no other form of mechanical transport…”

On a mountain bike, I generally feel much more comfortable sharing the trail with hikers or horses than with jeeps or ATVs.  As a hiker, I’ve shared trails with mountain bikers many times and mostly they’re considerate and polite. I’d much rather share a walking trail with bikers than with cars or other motorized traffic.  I also feel solitude is important. I feel a slower more contemplative pace is important.

A bill introduced to congress by Republican senator Mike Lee would change how wilderness designation is viewed.  In the early days after the Wilderness Act was passed, it was debated whether bicycles should be allowed in wilderness areas. It wasn’t until 1984, 20 years after the initial bill was passed, that the Forest Service permanently banned bikes.  There are some biking advocates who feel that the intention of the law was never to ban mountain bikes, which have only grown in popularity by leaps and bounds since the law was written. The same logic could be applied to drones, as I read on jmpeltier.com, a photography blog,

“So some people say, “well, that motorized thing was intended for manned aircraft and ground vehicles.  They couldn’t have envisioned personal drones in 1964. I can certainly fly a small camera around.””

As the blog goes on to say though, the point isn’t the technology available when the law was written, but the timeless concept of connecting to a wilder, rawer nature.  The law was intended to protect solitude and freedom in ways few other laws have ever attempted. I personally would find hitting a drone with a load of bird shot completely justified if buzzed by one in the backcountry, especially a designated wilderness area.

It’s also worth noting that Mike Lee, the Republican senator of Utah who sponsored the bill to allow mountain bikes in wilderness areas, has a measly 8% lifetime rating from the League of Conservation Voters.

Mike Lee’s bill, HR 1349 is summed up in part on congress.gov this way,

It’s not hard to imagine that the real goal behind the bill is to undermine wilderness ethics and capitalize on fractures already forming in the environmental movement, creating even more divisions and weakening it.  Indeed, as reported in outsideonline.com the International Mountain Biking Association (IMBA) was working with PEW, the Wilderness Society and the Idaho Conservation League to ask for a 500,000 acre National Monument in Idaho.

Idaho Republican Congressman Mike Simpson went further, working through congress to create a wilderness area that was signed into law by president Obama in August 2015.  The law created a 275,000 acre wilderness area, and shut mountain bikers out of trails they’d long ridden. Mike Simpson has a 7% lifetime rating from the League of Conservation Voters; it seems likely he had ulterior motives in supporting wilderness designation, beyond conservation.  Republicans by in large hate executive powers used to create National Monuments and this was a way to undermine executive authority in a way while seeming to champion conservation. Creating a wilderness also disenfranchised mountain bikers who were working with conservation groups to protect an area they were already enjoying.

Mountain bikes in wilderness areas are part of the bigger question of how bikes and mountain bikers fit into the environment and the environmental community.  Hiking and hikers have long been sacrosanct as part of a greater land ethic, the same is true for canoes, rafts, kayaks and even to some degree surf boards, and sail boats.

It’s worth noting though that rock climbing was at one point quite destructive, using placed pitons that permanently marred many climbing routes.  It was inventions like modern cams that made climbing compatible with modern outdoor leave no trace ethics. I think it’s reasonable to consider the impact of permanently placed bolts on sport climbing routes too; those permanently alter the landscape for everyone and only benefit a minority of outdoor users.  Mountain bikes usually don’t change the landscape in such an obvious way as climbing bolts. Mountain bikes do bring in more people though. If a trail is only for hikers, there are unquestionably less users on it than if it’s a mixed use trail. There are some mountain biking trails too though that make them unsuitable for hiking.

I remember visiting a trail near Palisade Colorado with my fiancé Erin. We were unaware to the degree it was used by mountain bikers but we decided we’d never hike it again.  It’s not a good hiking experience to move off trail every minute or so for bikers. The bikers were happy to accommodate us as the only hikers and were quite friendly, it was simply too crowded.

At the same time, mountain bikers can like hikers, climbers, skiers and other outdoor people be rallied to protect land from traditional environment enemies like extraction companies.  Adventure Projects, a company now owned by REI, creates maps that can be used through GPS function on smartphones. The company purposefully sent employees to the contentious Bear’s Ears National Monument to create maps, including mountain biking maps.  The maps were to support outdoor recreation in the area in opposition of extraction leases.

According to an article on TakePart, the company has so far mapped 24,546 bike rides in 30 countries.  With places like Bear’s Ears, it’s argued that more users who care about the area, the more allies are available to fight for protection.  The problem becomes more complicated when solitude, desolation and even cultural landscapes are part of what is trying to be protected.

In the midst of all of this  is the documentary Shift, a film I saw at an outdoor film fest a couple years back.  The film focuses on a Native community in the Yukon, where traditional trails on Montana Mountain were converted into a world class mountain biking trail system.  The film shows all the positives of creating mountain biking trails, economic development for local communities, personal development for young locals building trails.  The trails themselves are maintained and the landscape around them is preserved.

There are some locals who feel biking trails used to draw tourists are inappropriate though.  I feel a bit squeamish when economics is used as a large benefit to developing a ‘natural’ environment in a certain way, it’s the same argument used for opening mines, or logging.  It’s also interesting that the area in the film is one important to Native Americans, just as Bear’s Ears is. It may be that to a certain degree Native Americans and mountain bikers are finding allies with each other in ways that neither group is able to ally with traditional conservationists.  Mountain biking isn’t as destructive as mineral extraction or logging but it also isn’t hiking. How far environmentalists and Native Americans are willing to work with mountain bikers and what priorities bikers set for the land will be a big part of how land conservation will look in the future?