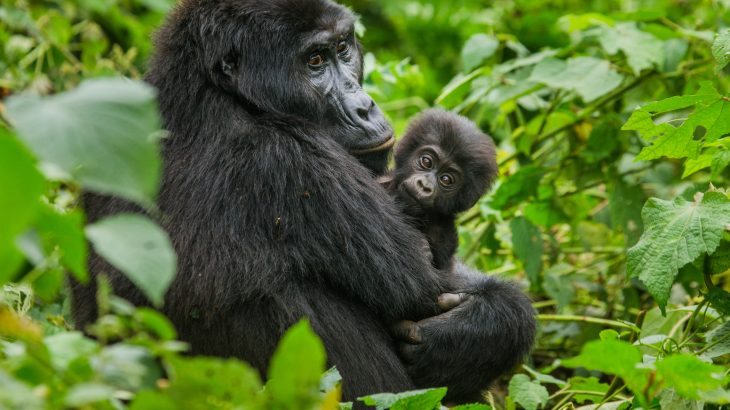 Swara, an East African conservation news site, reported from Nairobi Kenya last month that mountain gorillas have passed a small but important benchmark.  The iconic great ape is no longer considered critically endangered, its status being reclassified as merely endangered.

Mountain gorillas inhabit the volcanic ranges in Rwanda, Uganda and the Democratic Republic of the Congo (DRC).  The gorillas are found at high elevations of 2,500 to 4,000 meters above sea level in montane and bamboo forests.

National Geographic reports that the mountain gorilla has longer hair and shorter arms than lowland gorillas.  Despite the raw power embodied by gorillas, they’re all relatively gentle animals, subsisting on a mostly vegetarian diet, supplemented sometimes with insects.  According to African Wildlife Foundation, the exact numbers aren’t certain but mountain gorillas have a lifespan of about 40 to 50 years.  WWF reports that mountain gorillas were only first ‘discovered’ by science in 1902.

In the little over 100 years that mountain gorillas have been widely known of outside Africa, their population has suffered.  Mongabay reports that there are now an estimated 1,000 individual mountain gorillas, up from a low point of a few hundred animals in the 1980’s.  Civil unrest and violence contributed to the decline of mountain gorillas as well as direct poaching. Gorilla hands were even sold as souvenir ashtrays.  Mountain gorillas were sold illegally as pets. Encroachment on gorilla habitat by farmland played a role. Diseases can be spread from human to gorillas as more and more people fill the area around the animal’s habitat.

The plight of few wild animals captured the public’s attention like that of mountain gorillas.  Dian Fossey, the famous researcher heroically worked for the protection of mountain gorillas and promoted their popularity.  The 1988 movie Gorillas in the Mist where she was portrayed by Sigourney Weaver was nominated for 5 Oscars.  It may also help mountain gorillas that they’re so human-like; it’s not hard to see a relative looking at a gorilla.  Still, despite hard work and the undeniable charisma of the mountain gorilla, much needs to be done.

If mountain gorillas are going to continue on their recovery, conservation must continue without letting up.  A paper published in Science in April, 2015 drives the point home; mountain gorillas after declining to such small numbers are inbred.  Inbreeding in gorillas leaves the animals especially prone to disease and vulnerable. The original genetic diversity of mountain gorillas can’t be rebuilt on normal time tables, there just aren’t enough individuals left and so the situation remains perilous.  Gorillas also reproduce slowly compared to many animals, producing only one infant after nine months of gestation, like humans. Two wild mountain gorilla populations currently exist in the whole world.

The Virunga population in Virunga National Park DRC and Volcanoes National Park, Rwanda has 604 individuals, according to WWF.  In the DRC, war and instability has cost more than four million people their lives over the last 14 years.  Violence like this not only puts gorilla conservation on the back burner, it endangers them directly as well.  Desperate people sometimes turn to poaching as a way to simply survive. Currently the gorillas in DRC live in rebel occupied land, making conservation work there especially dangerous.

Another threat to the gorillas in Virunga is partly what makes it a good home for them to begin with: the fertility of the soil.  The good agricultural soil of Virunga has made it one of the more densely populated areas of Africa. Another population in Uganda, the Bwindi population has a recorded census of 400 individuals in 2011.  Four orphaned gorillas also live in a sanctuary in Uganda.

Much of what the future holds for mountain gorillas and their lowland relatives will depend on continued conservation efforts.  Another huge factor for wildlife in the area is political instability and the spread of human disease. Some places, like Bwindi Impenetrable National Park, try to balance the dangers of tourism to gorillas with financial gains for locals and conservation efforts.

Uganda Travel News reports that mountain gorillas in Bwindi have been tracked by tourists since 1993.  The main advantage to the park and conservation efforts comes in the form of money. Currently the tourism fee in Bwindi to see gorillas is at US $600 per person, with over 100 permits available per day.  This type of money shows significant potential to benefit communities of the area.

Park staff, porters, even businesses like restaurants and of course guides taking tourists to see gorillas all benefit.  Clearly tourism depends on some level of political stability and a minimum of violence in an area. The Dian Fossey Gorilla Fund International says that in Rwanda, gorillas made tourism the third highest foreign currency earner after coffee and tea at almost a million per year in the 1980’s.  In Rwanda the fee for viewing gorillas is only $250, still high but it’s argued that the high cost minimizes the impact on gorillas by limiting the number of visitors.  The fees also benefit local people and incentivize gorilla protection.

Of course, there are risks from tourism to the gorillas.  Tourists could transmit disease to the great apes, even killing them with a common bacteria or virus they have no immunity for.  Important gorilla behaviors might also be changed by tourism and tourism visits increase stress on the animals. The greatest benefits perhaps is that gorilla tourism can in the best case scenarios empower local people to provide for themselves while also encouraging protection of the environment.  Political instability, violence, poaching and heavy handed foreign involvement undermine these benefits.

If Africans in the area can find a way to build a stable future for themselves without taking too much from the gorillas, both could prosper together.  For now, there’s a small hope for the future of mountain gorillas.