National wildlife refuges offer land just for wildlife, away from the public • Earth.com 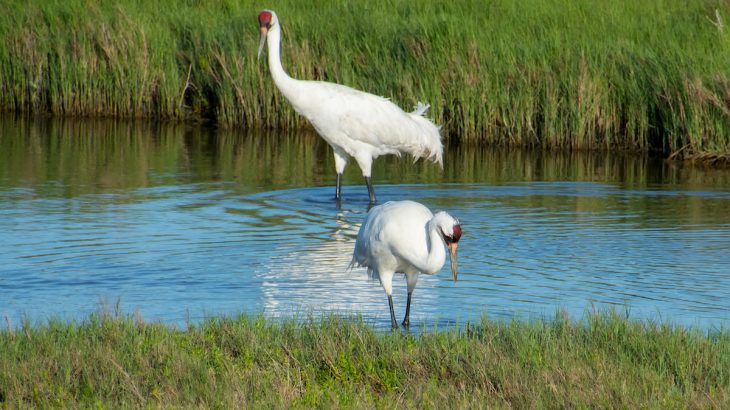 National wildlife refuges offer land just for wildlife, away from the public

Less flashy and well known than their counterparts in the National Park Service, National Wildlife Refuges play an important role in conservation.

Parks are designed for human visitors. Roads are built to allow tourists to access camp spots, hiking trails and areas where they may see wildlife or other natural wonders. National Wildlife Refuges, managed by the US Fish & Wildlife Service, have many of the same features as well as accommodations for hunters and fishers. But a key difference is that some wildlife refuges also contain large amounts of land that are inaccessible to the public, land meant to be used by wildlife and wildlife managers alone.

Aransas National Wildlife Refuge on the gulf coast of Texas is a perfect example of the theory behind wildlife refuges. Many National Parks have technically no prohibition against going off trail in many areas and most of the land is accessible unless specifically set aside to protect wildlife. Refuges are in a way the opposite – little bits of them are accessible to the general public, the rest being set aside for the wildlife that the refuge was created for. Parks are for people, refuges are for wildlife.

The longest trail in Aransas is only 1.3 miles long and is also rather flat except for raised observation decks allowing a view over the surrounding flat marshlands. All together there are only 6 of what could be called trails at Aransas National Wildlife Refuge and a 16 mile auto loop road but they give a small glimpse into a beautiful landscape. There is also an ocean fishing pier and a pier into Jones Lake, where ‘Georgie’ the alligator lives and a separate alligator viewing area.

Jones lake is a large expanse of calm, brown water decorated by the living jewels of darting mosquito fish and adorned with floating Lily pads. Many other fresh water pools at Aransas are just glimpses of water ways lined with cattails and sedges, veiled by thick plant life. Bullfrogs croak loudly from these half-disclosed sloughs, birds sing or titter from deep within.

Occasionally, the crash of a large animal will bring a visitor’s senses to full alert. I was startled this way on my last visit to Jones Lake. I was walking along the wooden planks of the pier when a splashing, crashing noise of a large animal moving quickly through marsh hit my ears. My mind immediately screamed ‘alligator’ but instead I had startled a deer. Wildlife in Aransas seems to jump from every side as a clumsy human visitor passes by.

Mustang Lake, another even larger lake, sits near the coast, separated by only a thin slice of land from open ocean. The lake stretches out along a coastal marsh beneath viewing platforms accessible by ramp, where the whole of the land stretches out below like a map. Aransas is part of a patchwork of different habitats, oak savannah, coastal prairie, fresh and brackish wetlands all combining to provide sustenance to an array of biodiversity.

Frogs leap quickly for water, herons and egrets struggle on large wings into the sky, deer stand on all the roads ready to run. The wildlife viewing at Aransas is spectacular. Wild turkeys strut with their tails fanned in the early morning light, bobcats and javelina are said to be regular if shy visitors. Bicycling the road I came upon a coral snake with the bright markings of a deadly bite painted on its delicate body. The summer months are a time of absence for the most famous residents of Aransas though.

In the cooler months, whooping cranes make Aransas National Wildlife Refuge their wintering grounds. Aransas is host to the last wild migratory population of the cranes. The last released official survey for the winter of 2017-18 found 505 whooping cranes in the Aransas area, marking the sixth year in a row that the crane population has grown. Winter is also when most of the tourists come to Aransas to see the endangered crane rather than the alligators that mate and lay eggs in the summer months. Aransas itself was established to protect migratory birds, although it was a happy accident that the refuge turned out to be a strong hold for the whooping crane. In total, 400 species of birds including the whooping crane make use of Aransas.

Before being made into a refuge, Aransas had a colorful history. Somewhere along the coast of Aransas, there is said to be buried pirate treasure and occasionally mammoth bones are unearthed or washed up by the gulf tides. Crushed sea shells show perfect evidence of a moveable sea level.

Several units make up Aransas National Wildlife Refuge besides the main unit with its short trails and road. The Matagorda Island is a small barrier island that is home to coyotes, alligators, cranes, Kemp’s Ridley Sea Turtles and more wildlife. The island has access only by water, with a 25 mile long paddling trail through a marsh being its only tenuous connection to the mainland.

Matagorda is also one of the few places accessible for camping to the general public, a round trip to the island and back under human power being extremely tedious for a single day. Matagorda and a spider web of other paddling trails near it are managed by Texas Parks & Wildlife despite being part of the National Wildlife Refuge.

Other units of the refuge are completely inaccessible to the public. Developed areas of parks are often seen as ‘sacrificial zones’. The Grand Canyon village is a good example. The place is a glut of bus clogged roads and camera wielding tourists set to a backdrop of grocery stores, a post office, restaurants and hotels. The inner canyon is the real jewel of Grand Canyon National Park, a place for boaters and backpackers alone. Aransas is like that in a way, yet the secret heart of the place isn’t for humans at all. The jewel of Aransas is saved for alligators, cranes, fish, frogs and the buzz of a million insects.