A more natural burial is possible, it just takes some planning • Earth.com 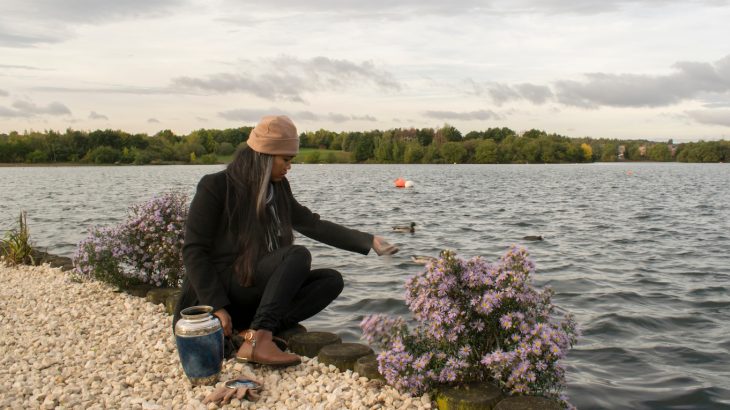 A more natural burial is possible, it just takes some planning

It is said that nothing is certain but death and taxes.  Unfortunately, both are highly regulated by the government in the United States.  A body slowly becoming part of the land or the sea with little interference seems to be the most natural state of affairs, but for a number of reasons, it’s not always easy to allow your body or the body of a loved one to naturally decay.

For a burial at sea, an easily obtainable permit from the EPA is required, and there are three general activities that are prohibited:

Some of these rules are fairly common sense, such as not using non-decomposable items. The rule about not burying pets at sea seems extremely arbitrary though, as if the small body of a cat or dog would be more detrimental to the sea than the body of a human. Mainly though, burial at sea is one of the easier ways to allow human remains to quickly be integrated into a natural environment. Some live in landlocked states or prefer the land to the sea, which makes natural burial more complicated.

Embalming is the practice that seems most to interfere with a natural burial.  Modern embalming is down with a small pump that removes blood and replaces it with embalming fluid.  The point of embalming fluid is to delay the decaying process as much as possible. Formaldehyde is the most common embalming fluid, one that has long been the gold standard of short term preservation of bodies at funeral homes.  You may remember the smell of the substance from grade school frog dissections.

Besides keeping bodies looking unnaturally good, The New York Times reports that in 2011 the government declared that formaldehyde is a carcinogen.  Unfortunately, no really good alternatives seem to exist for formaldehyde and funeral homes are slow to abandon a product that works so well.  Not wanting your body or that of a loved one pumped full of something that forestalls the body breaking down and may cause cancer is an increasing concern.  According to Northwoods Casket Company, there are now thousands of cemeteries offering natural burials in the US.  Getting around formaldehyde is legal but it takes some planning to do legally.

Funeral homes are required by law to offer a direct burial option to consumers.  A direct burial includes no embalming and burial in a modest wooden or cardboard container in a cemetery within 24 hours.  After 24 hours, things change. Many states require that a human body is either embalmed or refrigerated after 24 hours. Unfortunately, some facilities are small with limited refrigeration space and thus the default of embalming is fallen back upon.

Besides formaldehyde, there are other common practices that make it harder for a human body to become part of the Earth again.

Burial vaults are containers that surround the casket.  Usually a burial vault is now made of concrete. These vaults are used to make it easier to find a grave and not disturb the human remains in a grave when digging adjacent to it.  Burial vaults also keep caskets from sinking or shifting as earth settles. Only two states seem to require burial vaults,Louisiana and Massachusetts, according to Northwoods Casket Company.  Used as an additional barrier, concrete is also another unnatural product, and so burial vaults hamper natural burial.

Of course, cremation is a way to avoid so many restrictions and ashes can easily be spread into the environment.  According to the Cremation Association of North America, cremations are on the rise.  In 2017, 51.6% chose cremation, and in 2022 that number is projected to be 57.8% in the US.  In Canada, 2017 rates were already at 70.5% and projected to be at 75.1% by 2022. According to US-Funerals, caskets aren’t required by law although a basic container is necessary for cremation.

If you scatter your loved one’s ashes on public land such as a national park, it’s advisable to ask permission. National parks such as Yosemite and Rocky Mountain have official permits to scatter ashes.  Even without a permit, it’s unlikely that you’ll be bothered if you scatter ashes respectfully.  I knew a man that scattered his brother’s ashes from the top of Mt. Denali, completing a climbing trip the two had talked about doing together.

There are also a number of urns now available for ashes with the environment in mind.  There are several companies offering biodegradable urns with tree seeds inside them, and these urns are designed so that the human ashes feed the sapling tree.  Other companies allow your loved ones ashes to be mixed with concrete to be placed at sea where coral can use it to grow on, creating habitat for fish and other marine animals.

Death and decay are the most natural of things.  Every death contributes to new life. Unfortunately, the ideal of keeping a body alive-looking can be destructive in the long term and cut us off from the reality of death – its beauty as well as its ugliness.

In Tibet, a ceremony called a Sky Burial is traditional.  According to Tibetpedia, a person is carried into the mountains by the master of ceremonies.  Incense is lit to summon vultures. As the vultures arrive the body is cut to pieces and the birds are allowed to consume the entire body.

Closer to home, environmentalist Edward Abbey was buried in a sleeping bag in the desert by his friends, illegally on public lands.  Some say a Saguaro cactus stands over the unmarked grave but the location is known only to a few.

As Edward Abbey himself wrote of death in his masterpiece, Desert Solitaire, “if my decomposing carcass helps nourish the roots of a juniper tree or the wings of a vulture—that is immortality enough for me. And as much as anyone deserves.”