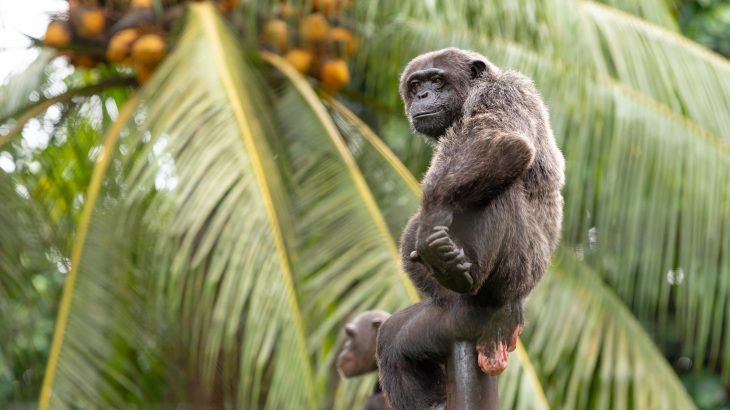 West African chimpanzee numbers have declined dramatically in recent years. Habitat loss due to mining is the biggest driving factor behind the chimpanzee declines, and populations have decreased by nearly 80 percent.

But the chimpanzee isn’t the only endangered animal suffering from habitat loss and climate change-driven habitat degradation. Other great apes like bonobos, gorillas, and orangutans are classified as endangered or critically endangered.

Conservationists working to manage West African chimpanzee populations and find a way to protect chimpanzees and other animals at risk of habitat loss without stifling mining operations, which are a great economic boon to the people of Senegal and other West African countries.

The problem is that there are concerns that protected areas do little to help species in these regions. For example, locals outsides of the Niokolo-Koba National Park have said that the animals in the park were all gone.

To see if this was the case, Stacy Lindshield, a biological anthropologist at Purdue University conducted a study comparing Chimpanzee populations both inside and outside the park.

The study was published in the journal Primatologica.

“We saw the same number of chimpanzee species inside and outside the park, but more species of carnivores and ungulates in the protected area,” Lindshield said. “There were qualitative and quantitative differences between what people were telling me and what I was seeing in the park. Niokolo-Koba National Park is huge, and the area we study is nestled deeply in the interior where it’s difficult for humans to access. As a consequence, we see a lot of animals there.”

Lindshield led a team of researchers and conducted field surveys around two sites, one inside the park and one outside. The researchers also set up cameras to record rarely spotted nocturnal animals.

One reason for the similar chimpanzee populations is that in some other West African countries, chimpanzees are hunted and killed for meat. The researchers theorize that if parks were utilized in other countries, there might be more noticeable differences in populations in protected areas.

However, the fact that both carnivore and ungulate (hooved animals) populations were higher in the park shows that national parks in developing regions offer protection and allow populations to grow.

“This provides evidence that the protected area is effective, at least where we are working, counter to what I was hearing from the public,” said Lindshield. “The management of protected areas is highly complex. Myriad challenges can make management goals nearly impossible, such as funding shortfalls or lack of buy-in from local communities, but I think it’s important for people to recognize that this park is not a lost cause; it’s working as it’s intended to at Assirik, especially for large ungulates and carnivores.”