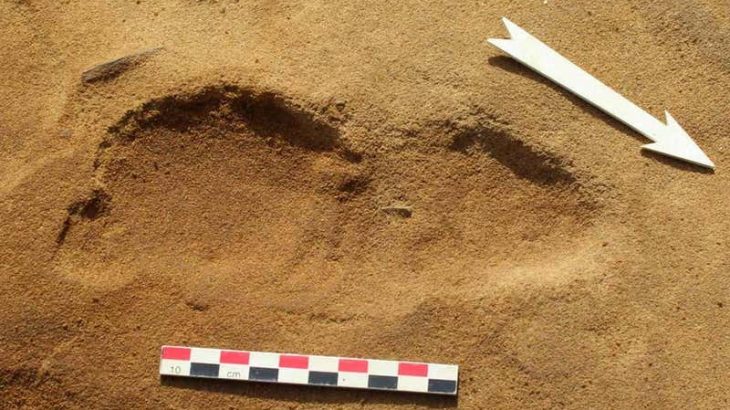 The largest known collection of Neanderthal tracks is giving scientists new insight into the size and composition of social groups 80,000 years ago. Hundreds of Neanderthal footprints were discovered in an archaeological site in Normandy across what is now a coastal creek bed.

A team of experts led by Jérémy Duveau of the National Museum of Natural History in Paris has meticulously analyzed the set of 257 fossilized footprints, finding that the tracks were preserved in dunes after they were rapidly covered up by sand.

The conservation of this many footprints “requires sort of a miracle,” said Duveau. Before this, he explained, only nine Neanderthal footprints were known from four different sites.

The tracks represent one of the only sites to reveal specific information about Neanderthal social groups. The size of the footprints, as well as eight handprints, indicate that most of them were left behind by children and adolescents. The youngest child was likely around two years old.

“By applying a morphometric method to a sample of fossil footprints made during a single brief occupation event, our analysis shows that they represent a small group with a majority of children and thus provides direct evidence of the composition of a Neandertal group,” wrote the study authors.

Stone tools that were uncovered at the site in northern France, known as Le Rozel, were similar to those found at other Neanderthal sites across Europe from around the same time.

While no skeletal remains were found, Duveau said that the footprints “represent a unique snapshot of hominin life,” providing a glimpse into past behavior that cannot usually be derived from body fossils or stone tools.