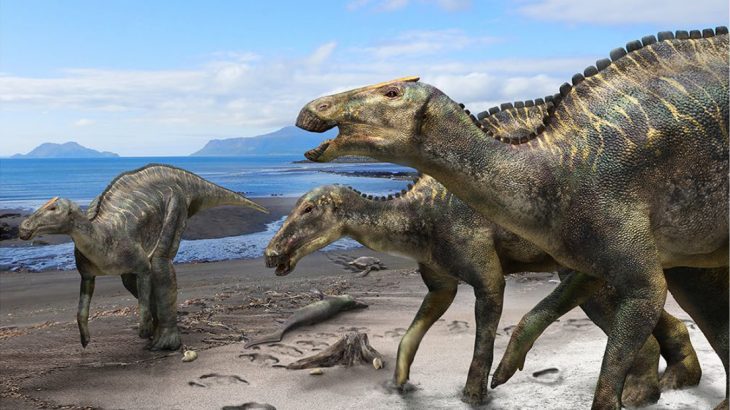 A nearly-complete duck-billed dinosaur fossil discovered in Japan. Archaeologists in Japan have unearthed a nearly-complete 72-million-year-old fossil of a crested dinosaur. The skeleton includes the skull, jawbone, spine, ribs, teeth, and both front and back legs, making it one of the most remarkable prehistoric fossils ever uncovered.

Furthermore, experts believe that this crested creature, named Kamuysaurus japonicus, is significant because it shows that Asia and the United States were joined by land at the time that this dinosaur walked the earth.

“’It is rare and pretty astonishing to find an almost complete skeleton,” said corresponding author Professor Yoshitsugu Kobayashi. “There is no doubt that this is the best preserved large dinosaur skeleton from Japan.”

Kamuysaurus was a duck-billed plant eater, about 26 feet long, and weighed more than five tons. This creature walked on all fours and preferred to live near water. The bony crest on its head places it in the hadrosaur family, and within the species called Edmontosaurus, which lived during the Late Cretaceous period.

Fossils of Edmontosaurus have been found in Montana, Nebraska, and New Jersey. Furthermore, genetic analysis showed that Kamuysaurus was also related to the Kerberosaurus from Russia and Laiyangosaurus from China.

However, after comparing Kamuysaurus to 70 other hadrosaurs, experts identified it as a completely new dinosaur.

“[This discovery] has global significance because this dinosaur shows us how the world has been connected through time,” said co-author Dr. Anthony Fiorillo, chief curator at the Perot Museum of Nature and Science in Texas. “Kamuysaurus is closely related to the animal we study from Alaska, Edmontosaurus, a duck-billed dinosaur also found throughout much of western North America.”

“Because these dinosaurs are so closely related, they provide further evidence that long ago, Asia and North America were connected,” Dr. Fiorillo said.

Though many of Kamuysaurus’s bones have yet to be identified, experts were still able to perform a total reconstruction.