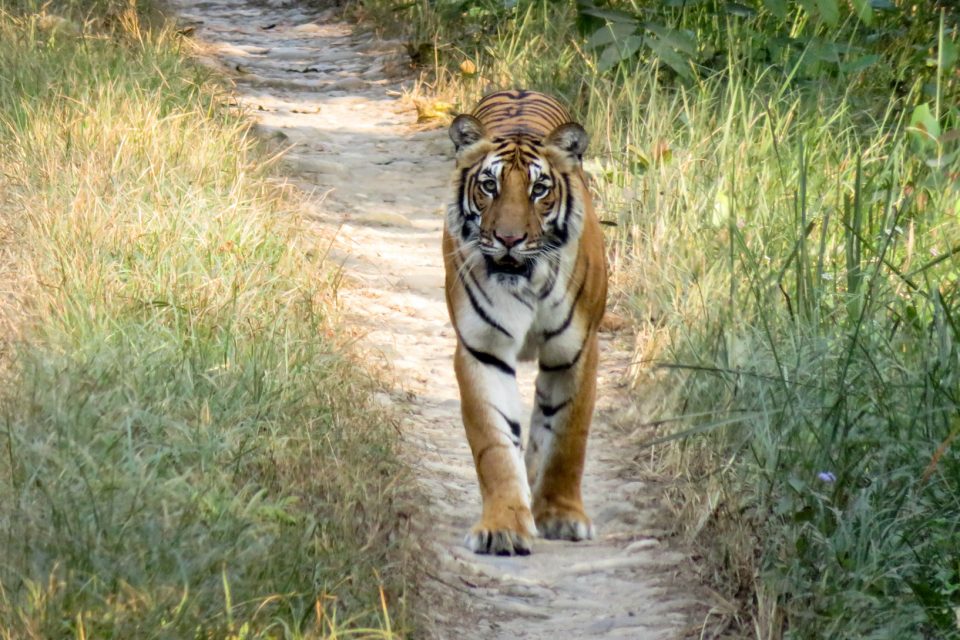 Tigers have long been a symbol of strength in Asia as potent as the symbol of dragons.  Ornate water buffalo horns are carved with both animals and sold to tourists in Thailand.  Animal Planet tells us that the Bengal Tiger is the national symbol of India and Bangladesh.  The Malayan Tiger is the national animal of Malaysia and South Korea has made the Siberian Tiger their national emblem.  It is said that the stripes on a tiger’s forehead spell out the Chinese character, ‘wang’ which means ‘king’. The tiger is truly the king of the jungle too, being the biggest and possibly most dangerous of the world’s big cats.

Despite their size and charisma, tigers are in danger.  For the same reasons humans respect the big cats, we often kill them.  Sometimes it’s to gain a part of their power as when tigers are used in Chinese traditional medicine.  Other times, tigers are killed because they represent a clear danger to humans and their livestock.

According to an article from Mongabay, tiger populations dropped from approximately 25,000 to 30,000 individuals in the wild to roughly 3,200 individuals in 2010.  In 2016, The New York Times reported a global tiger survey estimated the world population to be at 3,890 individual wild tigers.

Part of the reduction in tiger population is due to habitat destruction.  Tiger habitat has been reduced by 40% over the last 10 years. Today tigers live in only 7% of their original range, according to Mongabay.  Tigers sometimes make uneasy neighbors with humans and when their habitat shrinks, besides having fewer resources, they also more often come into conflict with humans.  There’s also poaching of tigers for other reasons.

Tigers and their body parts are a common ingredient in concoctions made by the superstitious trying to capture some of the great cat’s essence. In his book, The Tiger: A True Story of Vengeance and Survival, John Vaillant gives a vivid account of ‘tiger wine’ one such elixir:

“The trade in tiger-based products has been officially banned in China since 1993, but it is lackadaisically enforced, and blatant evidence of this greets every visitor to the Harbin Tiger Park: in the center of the ticket lobby stands a huge glass vat filled with “tiger wine.”  Immersed in this transparent liquid like a piece of provocative modern art is the full skeleton of a tiger, shreds of flesh still hanging from the bone. Around its feet are strewn more bones from other tigers. Visitors may have some of this morbid elixir decanted for 1,000 yuan (about $140) per liter.”

Tigers used in Chinese medicine, human conflict and habitat destruction have led to a dire situation for tigers in the wild, one that has just started to be addressed by governments and the international community.

2010 marked the world’s first tiger summit.  The summit, held in St. Petersburg, was called by Russian President Vladimir Putin and World Bank chief Robert Zoellick and had celebrity attendees.  At that time, a poached tiger was estimated to bring $25,000 to $50,000 on the black market according to The Guardian.  Together, the organizations and governments participating in the tiger summit committed $329 million over five years to the goal of doubling tiger populations in the 13 countries where tigers ‘roam freely’.

Surprisingly for many, Vladmir Putin took one of the stronger stances on tiger conservation.  In the past the Russian leader has banned seal hunting, and The Guardian reports that Russia’s tiger population rebounded from 30 in 1945 to around 500 individual tigers in 2010.  In many ways Russia has lead global tiger conservation, but the important decisions will have to be made by China, home of the biggest demand for illegal tiger products.  This year, Nepal also announced that it’s been rather successful in the commitment the country made during the tiger summit.

The WWF reports that Nepal is on track to be the first of the countries to agree to the Global Tiger Recovery Programme endorsed during the 2010 Tiger Summit.  Nepal was one of the countries that pledged to double their population of wild tigers by 2022 and now it’s almost certain they’ll succeed.

The good news comes as the result of an extensive tiger survey carried out by Nepal’s Department of National Parks and Wildlife Conservation Department of Forestry partnered by the World Wildlife Fund – Nepal.  The project included analysis of some 4,387 camera trap images, boring, time consuming but necessary work. The area monitored was over 1,700 miles along an important area near India. Nepal now has an estimated population of 235 wild tigers, almost twice the estimated population of 121 tigers found in 2009, according to AP News.  Nepal has taken real initiative in tiger conservation, the prime minister of the small country is even head of their National Tiger Conservation Committee.  Other countries have started to show positive signs for tiger survival as well.

Bhutan, a Buddhist kingdom, long recognized for measuring government success on happiness as well as promoting conservation has shown promise for protecting tigers.  IUCN.org reports that 72% of Bhutan is forested and an impressive 51.4% of the nation is made up of protected areas.  Introduction of camera traps into tiger conservation in Bhutan has lodged new records in how high above sea level tigers have been found.

Since monitoring tigers in Bhutan, one was found at an impressive 4200 masl ( about 13,779 feet above sea level).  Research such as this demonstrates for the first time that high elevation habitat may be important for tigers in the Himalaya region.  There is also hope that high elevations that are difficult to access may act as safe havens for tigers. India is important having part of the Himalaya as well as lower elevation tiger habitat.

In 2014, there was estimated to be 2,226 wild tigers in India, Time reports.  The 2018 All India Tiger Estimation, said to be the largest wildlife survey ever still hasn’t resulted in numbers yet.  Signs of past tiger population estimates in India have been promising, with tiger numbers slowly growing since 2009. Russia, Nepal, Bhutan and India are only part of the equation though.  Without the full cooperation of China, there will continue to be an incentive to kill tigers for money. The saddest part perhaps is how pointless it all is. Killing a tiger, making it into useless medicine is the last resort of the uneducated and superstitious.  Tiger survival depends on whether humans can be as wise as we assume ourselves to be.