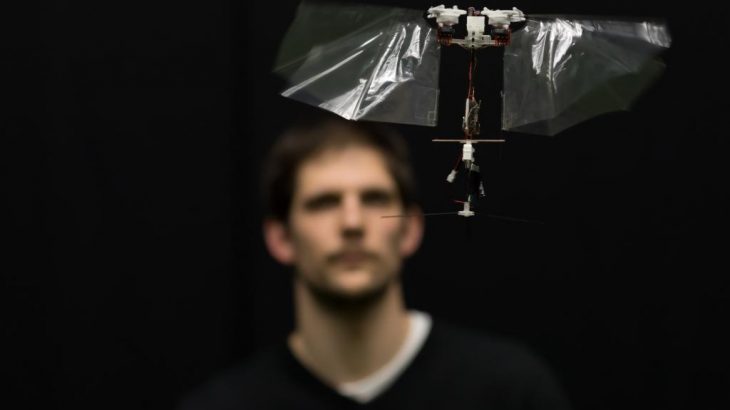 New flying robot designed to mimic the movement of insects

A new microrobot designed with the same agility and maneuverability of fruit flies is opening doors to new methods of studying the mechanisms of insect flight.

Insects and flying animals have recently been a source of inspiration for engineers looking to create robots that have speed and agility of those species.

For example, some flying animals can hover over something for a period of time but are also able to undertake speedy escape maneuvers.

The new robot was developed with a simple design, but there exists no flying microrobot like it. The robot’s wings can beat 17 times per second which allows the robot to stay in the air and also make minor flight adjustments.

A paper outlining the robot’s abilities, design, and potential research implications was published in the journal Science.

“The robot has a top speed of 25 km/h and can even perform aggressive maneuvers, such as 360-degree flips, resembling loops and barrel rolls,” said Matej Karásek, the first author of the study and lead robot designer. “Moreover, the 33 cm wingspan and 29-gram robot has, for its size, excellent power efficiency, allowing 5 minutes of hovering flight or more than a 1 km flight range on a fully charged battery.”

The robot caught the attention of researchers from the Wageningen University & Research who realized that its flight design may be able to help shed light on the movements of insects.

“When I first saw the robot flying, I was amazed at how closely its flight resembled that of insects, especially when maneuvering. I immediately thought we could actually employ it to research insect flight control and dynamics,” said Florian Muijres, a professor from the Experimental Zoology Group of Wageningen University & Research.

A number of experiments were set up with the robot to test its agility and maneuverability with the goal of mimicking how a fruit fly escapes being swat at.

The flying robot’s movements matched that of a fruit fly, even while turning quickly or changing direction to escape.

“In contrast to animal experiments, we were in full control of what was happening in the robot’s ‘brain,’” said Karásek. “This allowed us to identify and describe a new passive aerodynamic mechanism that assists the flies, but possibly also other flying animals, in steering their direction throughout these rapid banked turns.”

Beyond just better understanding the mechanics of insect flight, the researchers say the robot also has promising implications for drone technology.

“Insect-inspired drones have a high potential for novel applications, as they are lightweight, safe around humans and are able to fly more efficiently than more traditional drone designs, especially at smaller scales,” said Guido de Croon, the scientific leader of the MAVLab.