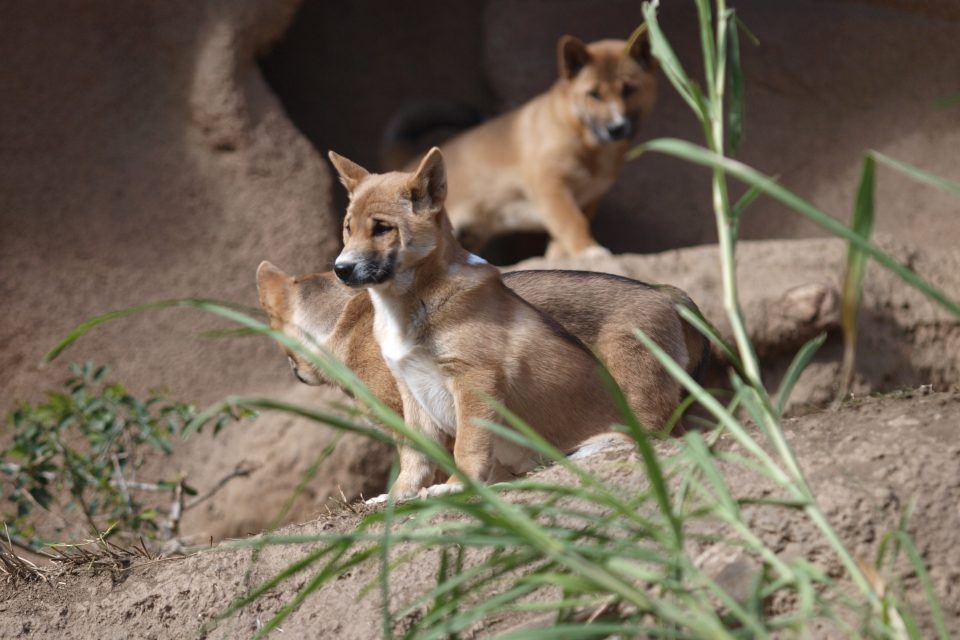 Scientists have pieced together wide-ranging archaeological and DNA evidence in an effort to elucidate the origins of the species known as Canis familiaris—the domestic dog. Results have been conflicted.

Whatever the case, this remarkable partnership was key in the evolution of our species…the first animal to be domesticated, dogs have trailed us in our expansion across the globe, assisting us in our hunts, defending our homes from intruders, and, in some cases serving as companions and valued members of the family. One type of dog in particular has both provided insight into how and when we may have invited primitive pups into our homes and puzzled those seeking to trace that process. The New Guinea highland wild dog, also known as the New Guinea singing dog, exists in both fully wild and domesticated forms, indicating that the domestication process, however it occurred, is hardly a just-so story.

The New Guinea highland wild dog is believed to be among the most primitive of extant canines. Genetic analysis has aligned it with other so-called ancient breeds such as the basenji, Akita, and Siberian husky. Native to the second-largest island in the world, New Guinea, where it makes its home in the precipitous mountains of the West Papua province of Indonesia and the country of  Papua New Guinea, it is thought to have arrived from South China as long as 10,000 years ago. The breed was certainly there by 5,500 years ago, the date of the oldest fossil, a tooth. Interestingly, while they are believed to have been transported by humans, the dogs established a wild population as well.

Native peoples kept them for use in hunting and occasionally captured wild ones to supplement the captive population. They paid tribute to the dog’s unique vocalizations, which have been been likened to whale song, with the moniker Anging Penyani—the dog that sings. The breed is perhaps better known in the West as the New Guinea singing dog, though scientists prefer to restrict the use of that name to the domestic line. From New Guinea, the dogs may have migrated over the land bridge that once connected the island to Australia and established themselves there, where they evolved to suit the flatter landscape and ultimately became dingos. Dingos, while larger and longer-legged, share many physical characteristics with the New Guinea breed, including their coloration, which varies from from ginger to golden to black with areas of lighter fur.

New Guinea highland wild dogs were first observed by Europeans in 1897, by English zoologist Charles Walter De Vis. He either shot two of them or purchased specimens from native hunters. It wasn’t until half a century later, in 1956, that living specimens were collected. The two dogs were sent to Australian businessman Edward Hallstrom’s animal research center in New Guinea and then, two years later, to Sydney’s Taronga Zoo. Whether the pair was wild at the time of capture or was part of a tame population kept by New Guinea villagers is unknown.

At Taronga, they were first classified as Canis hallstromi, though they have since undergone a number of taxonomic revisions and are now considered either a subspecies of Canis lupus or Canis domesticus. In 1976, five more dogs were collected by a German team. These animals—along with a handful of later additions—comprise the founding stock of the entire captive population, which amounts to some 200-300 animals. While initially restricted to zoos, including the San Diego Zoo, which received a specimen from Taronga in 1959 and has since kept a breeding population, the dogs are increasingly kept in private homes as pets. Following the conclusion by some scientists that they were little more than feral dogs, many zoos divested themselves of their animals, which were then sold.

However, more recent studies have again asserted the evolutionary importance of the breed and interest in researching them is on the rise. A 2016 expedition took the first verified photographs of wild dogs in decades. Sightings of the creatures have been rare. The last verified sighting prior to that point had been in 1989. Other sightings of the dogs in 1965, 1991, 2005, and 2012 provided tantalizing evidence of the possibility that they had survived in New Guinea’s remote highlands, as had two studies in the 1990s that found tracks and feces but failed to sight the dogs themselves. However, the continued presence of a wild population was unconfirmed until the 2016 venture, led by American zoologist James McIntyre, one of the founders of the New Guinea Highland Wild Dog Foundation. McIntyre and scientists from the University of Papua (UNIPA) were able to obtain numerous photographs of the dogs as well as samples of fur and feces for DNA analysis. Their observations confirmed the little that is known about the dog’s habits in the wild.

They appear to live in small groups and may be relatively solitary outside of the breeding season. Shy and wary, they nonetheless appear to be able to coexist with humans. (There is a large copper mine in the region where the dogs were observed.) More agile and flexible than most dogs, they are supremely adapted to their rugged mountainous habitat. They are even able to climb shrubs and trees with low-hanging branches.

Relatively small at about 25 pounds, their diet appears to consist mostly of small mammals such as tree kangaroos, cuscus, possums, and rats, as well as birds. At least one previous observation by a native hunter suggests that they may occasionally attempt to hunt the dwarf cassowary (Casuarius bennetti). The hunter found an eviscerated dog that a cassowary likely killed while defending itself. No other animal native to the region would have been capable of such violence. New Guinea highland wild dogs also retain enlarged carnassial teeth, a feature typically found only in wild canines. Carnassial teeth are reduced in fully domestic breeds. It has been inferred from their highly reflective tapetum, which takes on a green cast in low light, that they are nocturnal hunters. The tapetum reflects light onto the retina, making night vision more acute.

The dogs communicate in a variety of ways, most recognizably in a coordinated chorus of eerie howls. Both males and females are thought to be involved in care of the young, though after a certain point of maturity, both sexes become aggressive toward their offspring, suggesting that they do not remain in extended family groups throughout their lifespans.

These fleeting observations in the wild have filled some gaps in the knowledge about these dogs, but the majority of what is known about their behavior is based on observations of captive specimens. Singers, as they are known to those who keep them, exhibit a number of behaviors not seen in other dog breeds. Their uniquely flexible legs, which facilitate their climbing abilities, also allow them to fold their paws underneath them like cats. And like cats, they mark territory and express affection by rubbing the scent glands on their cheeks against objects and humans. Unlike most dogs, which pin their ears back to their heads when indicating submission, singers instead extend them laterallys—this has been described as “airplane ears.”

Singers also initiate play differently from most domestic dogs, crouching down to the ground rather than lifting their hindquarters. This habit, along with an open-mouthed “play bite” similar to that seen in coyotes, may lead to aggressive incidents with other breeds. However, singers usually adapt quickly to the different social signals of their cousins. And while domestic dogs typically come into heat twice or three times a year, singers come into heat only once a year, though they may come into heat again some 8 to 12 weeks after the first estrus if they do not become pregnant. Female singers also exhibit unusual behaviour during copulation, including a series of rhythmic contractions and a protracted scream. Though they require some special accommodations due to their unique habits, they are generally good pets if their needs are met. They are loyal, affectionate, and rarely display aggression.

Their rarity has led to an extensive conservation project that attempts to track the various captive lineages through the recording of breeding events and collection of genetic material. Studies of village dogs in New Guinea have indicated that most of those populations are no longer pure due to the introduction of dogs from other areas of Asia and from Europe. This has complicated research into the relationship between village dogs and wild specimens and has raised concerns about the infiltration of wild populations by domestic dog DNA, as is the case with Australian dingos.

Their exact place in the larger canine family tree remains to be determined, but however they ultimately fit into the convoluted genealogy of the domestic dog, they’re almost certainly the cutest living fossils yet discovered.