New houseplant can guide itself toward sunlight when necessary • Earth.com 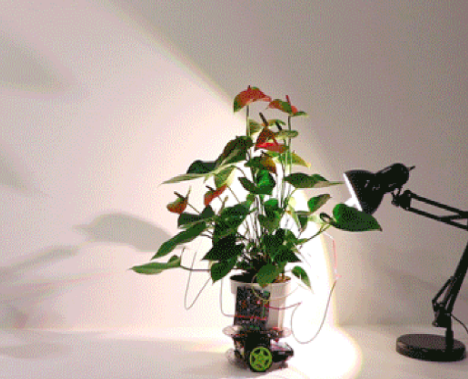 New houseplant can guide itself toward sunlight when necessary

Experts at the Massachusetts Institute of Technology (MIT) have unveiled a houseplant that can actually guide itself to receive sunlight whenever necessary. The “cybernetic lifeform,” which is referred to as Elowan, can literally roll itself toward the sunlight.

Sensors in the form of electrodes placed in the plant’s stems and also in the ground can be used to monitor the needs of Elowan, and can intensify the natural inclination of the plant to extend its leaves in the direction of the light. Any weak signals transmitted from the electrodes are amplified to send signals to the cyborg, which subsequently moves itself to a more optimal position.

According to Elowan’s creator, Sareen Harpreet, humans robots will not be the only cyborgs of the future. He suggests that “cyborg botany” is potentially more important, as plants could be equipped with technology to help them thrive.

“As humans, we rely on technological augmentations to tune our fitness to the environment,” Harpreet said on his website. “However, the acceleration of evolution through technology needs to move from a human centric to a holistic nature-centric view.”

The mobile houseplant is likely just the first of many more technologically advanced plants to come.

“Elowan is an attempt to demonstrate what augmentation of nature could mean,” said Harpreet. “Elowan’s robotic base is a new symbiotic association with a plant. The agency of movement rests with the plant based on its own bio-electrochemical signals, the language interfaced here with the artificial world.”

“These in turn trigger physiological variations such as elongation growth, respiration, and moisture absorption.”

A detailed overview of the project from the MIT media lab can be found here.