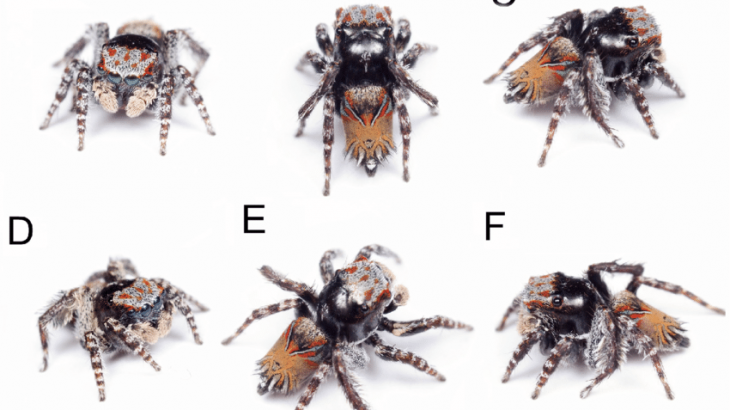 Western Australia is the home ground of three newly discovered species of peacock spider – each about the size of a grain of rice.

Maratus aquilus, Maratus felinus and Maratus combustus are recognizable due to their distinctive and colorful patterns, according to Joseph Schubert, a research assistant at ChownLab, a research group at Monash University.

“They’re incredibly small but so charismatic and so colourful,” Schubert told the Australian news site 10 daily.

The spiders were discovered by a group of photographers who work with Project Maratus and described by Schubert. The group made their discovery while visiting Lake Jasper and Mount Romance in Western Australia.

Each of the three new peacock spider species got its name from its abdominal markings: “aquilus” for markings resembling an eagle’s face, “felinus” for a cat-like design, and “combustus” for a “fiery explosion” pattern.

Unlike other spiders, which are identified by their hair, fangs or other features, peacock spider species can be distinguished using their coloring and markings.

The males tend to be brightly colored while the females are more “drab,” Schubert said. Male peacock spiders, like some other jumping spiders, use their bright coloration to attract a mate.

There are 74 known species of peacock spider in the world, around 60 of them discovered in the past 10 years alone. Around half can only be found in Western Australia, most in the state’s southwestern region.

“The Southwest Australia ecoregion is known as one of the planet’s major biodiversity hotspots and a hotspot for peacock spider diversity,” Schubert wrote in his research.

Another recent discovery among peacock spiders is Maratus sagittus, named for an arrow-like marking. Schubert and fellow researcher Robert Whyte of the Queensland Museum described this species, found in Queensland, in January.