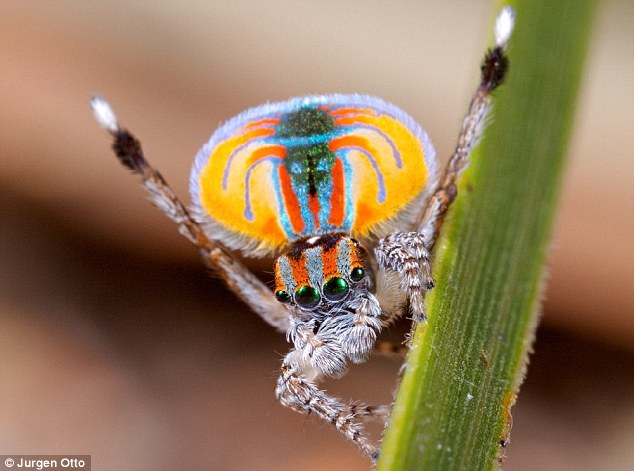 Male spiders use rainbow colors and dancing to find females

When male jumping spiders want to mate, they do the arachnid equivalent of flexing their muscles or leaning up against a bar and trying to look cool – they dance around and show off in front of females in order to attract a partner. Two types of male spiders from North America and Australia have upped the dating game ante, displaying vibrant colors in hopes of getting a female’s attention.

This is noteworthy for two reasons. “It’s rare to see bright colours on most spiders, as they don’t usually have the visual sensitivity to perceive colour beyond drab blues, greens, and browns,” said University of Cincinnati biologist Nate Morehouse. He presented the research at the 2017 Society for Integrative and Comparative Biology Conference.

The Maratus “peacock” jumping male spiders of Australia and the Habronattus jumping spider of North America are game-changers in this regard. Not only do the males of both species show off bright colors in a bid for mates; these spiders have also developed the ability to see colors such as red, yellow, and orange.

This is because the Maratus spiders evolved additional photoreceptors that allow them to see colors that most spiders can’t. Meanwhile, the Habronattus spiders have a red filter on their retina that combines with green-sensitive retinal cells.

How do you test a spider’s vision? Scientists did not pull out tiny eye charts and ask spiders to read the last line from the bottom. Rather, they used something called microspectrophotometry. This measures how photoreceptor cells in the retina absorb light. They also used visual system modeling, a method that relies on mathematical modeling to determine how the retina might perceive color.

Although the two species of spiders are similarly colorful, they are not related. In fact, the peacock spider has something that the Habronattus does not: an abdomen flap that they can wave as they do their mating dance. While it’s not crushing beer cans on one’s head, female spiders are no doubt impressed.