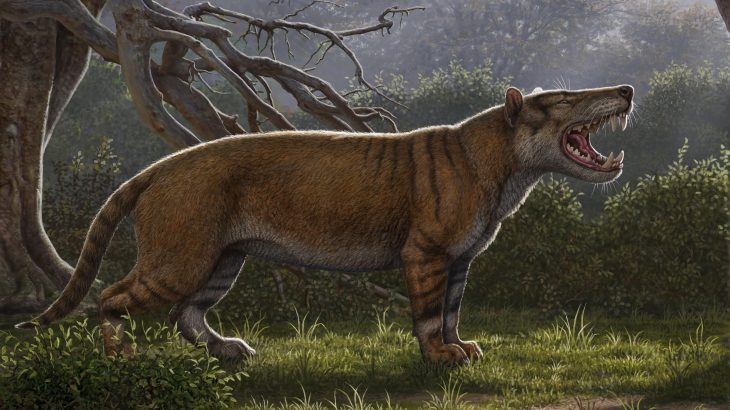 22 million-year-old fossils that were tucked away in a drawer in the National Museums of Kenya once belonged to a new species of a giant mammal that was bigger than a polar bear.

It wasn’t until paleontologists from Ohio University recently rediscovered the fossils that it was realized that the bones belonged to an entirely new species of long-extinct giant carnivore.

“Opening a museum drawer, we saw a row of gigantic meat-eating teeth, clearly belonging to a species new to science,” said Mathew Borths, the lead author of a study published in the Journal of Vertebrate Paleontology.

The researchers called the species Simbakubwa kutokaafrika because simbakubwa is Swahili for “big lion,” which is fitting since the animal would have ruled the food chain much like Africa’s big cats today.

However, Simbakubwa kutokaafrika is not closely related to lions or other big cats but instead belonged to a group of extinct mammals called hyaenodonts.

Kutokaafrika translates to “coming from Africa” in Swahili because the species was the oldest species of gigantic hyaenodonts and likely originated in Africa before moving north and flourishing for millions of years.

45 million years after the extinction of non-avian dinosaurs, hyaenodonts became the first mammal carnivores in Africa.

A rapidly changing global ecosystem coincided with the extinction of hyaenodonts, but researchers are still unsure of what exactly caused the mammals to be wiped out.

The newly described fossil could help researchers uncover more clues to its past and eventual extinction which makes the discovery particularly noteworthy.

“This is a pivotal fossil, demonstrating the significance of museum collections for understanding evolutionary history,” said Nancy Stevens, a co-author of the study. “Simbakubwa is a window into a bygone era. As ecosystems shifted, a key predator disappeared, heralding Cenozoic faunal transitions that eventually led to the evolution of the modern African fauna.”