Why octopus farming is no simple solution to overfishing • Earth.com 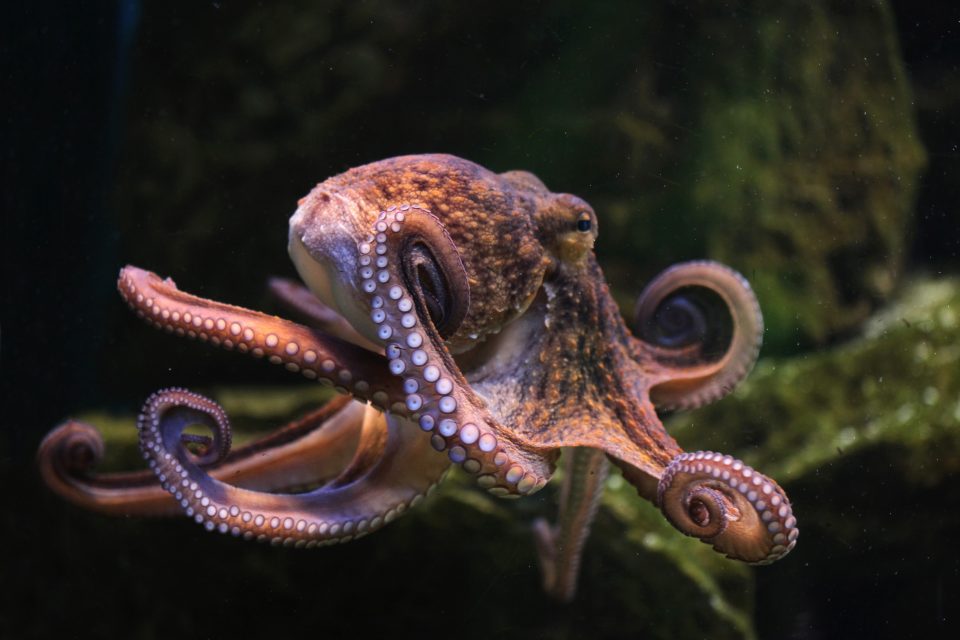 Why octopus farming is no simple solution to overfishing

It’s well known that cephalopods as a group are intelligent.  There are stories of octopus in captivity quietly moving into nearby tanks to eat all the fish before returning to their own tank before keepers arrived in the morning.  A YouTube video shows an octopus pulling two pieces of coconut shell together and hiding inside.  After hiding, the octopus stacks the coconut shells together and carries them away, apparently planning for using them in the future.  Octopuses and other cephalopods are a paradox, dissimilar in many ways to other – long-lived and social – intelligent animals.

In fact, a report from the New York Times points out that scientists don’t have a clear grasp on cephalopod intelligence, they just know that the octopus is a very smart animal.  Despite the intelligence of octopus and other cephalopods, humans have a long history of eating them.

While climate change and overfishing is diminishing the populations of many wild animals in the ocean, cephalopod populations seem to have been rising recently.  Research from the University of Copenhagen suggests that cephalopods may become and increasingly important sustainable seafood now and in the future.

With short life spans, cephalopods reproduce and grow quickly and they’re adaptable to changing water temperatures.  Indeed, as other marine animals suffer from overfishing and warming oceans, cephalopods are filling in the gaps and growing in population, according to a recent report from a biologist published in The Conversation. Another report from 2014 cited 4.8 million tons of cephalopods caught annually, although the number may be much larger due to under reporting in some countries.  Despite the trend of growth in cephalopods, the animals can change population numbers for better or worse rather quickly.

Because of their short life spans, cephalopods can increase in numbers very quickly but can also drop in numbers very quickly.  Overall cephalopods seem quick to rebound with another generation but it would be easy to kill off most of a population with overfishing before realizing the extent of the damage.  For this reason as well as the predicted popularity of squid and octopus plates in the future, octopus farming is a growing trend. Until recently, raising cephalopods in captivity has been nearly impossible to accomplish.

For a long time, other seafood has been raised in farms, from fish to oysters, raised in captivity and fed a formulated diet.  According to the USDA, the US traded in 27,929,000 pounds of fresh or frozen aquaculture raised trout in 2017 alone.  According to NOAA, the US produced 37 million pounds of aquaculture oysters for a total of $192 million in 2016.  10 million pounds of clams raised in the US in 2016 made $138 million in profit. The total value for all US marine and freshwater aquaculture in 2016 was estimated to be $1.5 billion, making up 21% of US seafood and fisheries products by value.  Clearly aquaculture is profitable. With many wild fish being over harvested at alarming rates, many feel that aquaculture is the way of the future.

The Balance reports that there are many benefits to aquaculture in general.  Aquaculture can create a more steady supply of food. Fish and other animals raised in captivity aren’t as dependent on natural conditions or seasons for their growth and health as wild caught fish.  Some studies suggest that aquaculture is more sustainable as well and allows wild populations to potentially rebound.

But as we’ve reported, the downsides to captive raised fish (and other animals) is pollution from food and waste. Still, the benefits for many seem to outweigh these downsides.  Cephalopods are quite different from most of the organisms raised in aquaculture today, so how well an industry of raising octopus and squid will do is still a bit uncertain.

In 2013, Scientific American reported on the first octopus farm, Mayab Mollusks, on the coast of Mexico’s Yucatan peninsula.  According to a first-hand account in Southern Foodways Alliance by Richard Schweid who worked for a time at Mayab Mollusks, the farm was still working towards being profitable in 2016.  Kanaloa Octopus Farm in Hawaii is another startup octopus aquaculture business.  So far, Kanaloa seems to be focused on researching the viability and methods for octopus aquaculture as well as being a place for tourists to see captive octopuses.

400 million pounds of octopus were bought and sold globally in 2016 and that number is only rising in the US and globally.  Demand for octopus is projected to only continue rising in the near future. Aquaculture seems like a natural way to meet the huge demand for octopus meat and create a sustainable source of food.  Unfortunately for the cephalopods themselves, the growing trend in their population that I mentioned earlier has now reversed. What was seen as an increase in octopus populations a few years ago is now a drop in wild populations.  Global catches of octopus in the 1970s were around 99,000 tons per year but now are only 44,000 tons, according to The New Food Economy.  With wild octopus declining perhaps from fishing, aquaculture not yet viable for the animals seems even more important.

Unfortunately, it isn’t as simple as finding a way to farm octopuses. In an analysis of octopus fisheries, Jennifer Jacquet, professor of environmental studies at New York University, criticized the idea of farming octopus.  Octopuses are carnivores and in order to feed them, even more fish and other animals would have to converted into octopus feed.  Catching more fish for farmed octopus not only hurts the populations of fish caught but would actually harm the wild octopuses themselves by leaving them with less natural prey.  About one third of the fish caught globally are used to create food for other animals, about half of that goes to aquaculture itself. Some of the fisheries used to create animal food are already in decline.

Faced with the increased rarity of an animal we like to eat, humans traditionally eat it down to the last individual.  Dodos died this way. Mammoths potentially were hunted out too. Passenger pigeons were once a cheap source of food sold by the pickled barrel.  We can recognize intelligence in octopus but as a species we don’t seem to show actual restraint. Instead of simply giving up a food, we do our best to endlessly manipulate our world so we can continue business as usual.  The octopus is just another victim to this way of thinking.