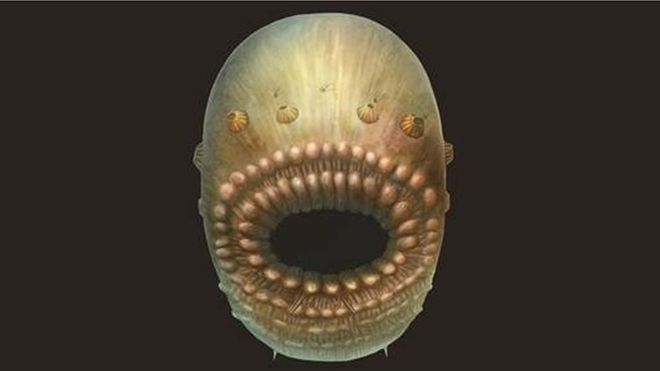 Oldest human ancestor revealed. When you look through family photos, it’s often easy to see where you got your blue eyes or turned-up nose. It may come as a surprise, then, that none of us resemble the creature that scientists are calling our oldest human ancestor.

Known as Saccorhytus, traces of the animal were found preserved as a 540-million-year-old fossil. Despite its age, scientists said the fossil was “exquisitely well-preserved.” The tiny being was only about a millimeter in size – so small that it lived between grains of sand at the bottom of the sea.

University of Cambridge professor Conway Morris, who led the research team, spoke to BBC News about their discovery. “To the naked eye, the fossils we studied look like tiny black grains,” he said, “but under the microscope the level of detail was jaw-dropping.” Their findings were published in the journal Nature.

Despite its being a deuterostome ancestor, scientists can only find an oral opening on Saccorhytus. “Our material is generally crushed, and despite the superb preservation we might have overlooked the evidence,” Morris said to the New York Times.

If, in fact, there isn’t an additional opening, researchers believe that the creature ate and excreted waste through the one orifice. (Still too much info. Right.)

Saccorhytus had a symmetrical body and seems to have moved by contracting its muscles and wriggling around. Scientists also note that it had tiny conical structures that were possibly an early form of gills.

Most noteworthy, though? Its large mouth, which it used to suck in food particles before digesting them and…  Well, you know.