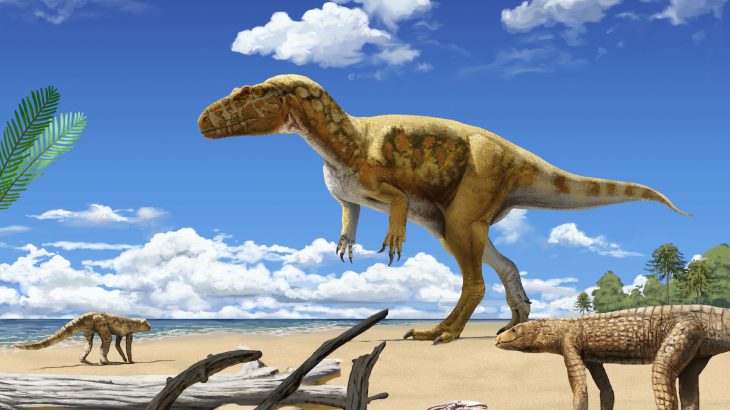 Everyone knows or thinks they know of T. Rex and Velociraptor sp. from popular portrayals in movies and books like Jurassic Park.  We’re accustomed to these examples of dangerous predatory dinosaurs but those of us seriously interested in dinosaurs know they’re just the tip of the iceberg.

Large raptors like Utahraptor and other Tyrannosaurids like Albertosaurus of Canada or Teratophoneus of the Grand Staircase-Escalante barely start to fill out a history of almost 200 million years occupied by the likes of Allosaurus and even giant birds (technically dinosaurs) like Moas.  It’s a history that spans the whole globe as well. Predatory Tarbosaurus lived in Mongolia with Velociraptor, theropod (two legged predator) dinosaurs have been found in South America and Africa.  A few theropod fossils have been found in Australia and even Antarctica as well. But now, a new chapter in the history of predator dinosaurs has been discovered.

As we reported last month, researchers working in the Italian Alps have discovered what so far is the oldest example of a ceratosaurian.  Ceratosaurians are the oldest clade of theropod dinosaurs, perhaps best known by the horned Ceratosaurus as well as the Dilophosaurus that played an important role in Jurassic Park.  Both of these examples have strange head gear, the crest on top of the Dilophosaurus (sorry but the neck frill was pure Hollywood invention) and a horn on the nose of the Ceratosaurus.

As the oldest of theropods, it’s possible that these dinosaurs were the ancestors of all theropod dinosaurs but it’s impossible to say for sure at this point.  According to the University of California Museum of Paleontology, Ceratosaurians were very bird-like that scientists believe first evolved during the Triassic, a period that started about 225 million years ago.  Despite this, no examples of Ceratosaurians have been found earlier than the Jurassic.

The new dinosaur discovered in Italian Alps is still a Jurassic dinosaur of about 198 million years ago but it’s the oldest of its type found so far.  Other theropod dinosaurs close to the same age are rare and often incomplete. Other old theropod dinosaurs from Europe include incomplete discoveries like a pelvis, vertebrae and femur found in England and a 40% complete Dracoraptor skeleton from Wales.

The new dinosaur has been named Saltriovenator zanellai and is not only older than any other Ceratosaurians found so far, it also seems to represent the largest predator dinosaur that old known to science. The dinosaur is about 25 million years older than previously known large theropod dinosaurs.  This is also the first Jurassic dinosaur fossil found in Italy. The find was just recently published but the fossil was found by an amateur fossil hunter at a quarry back in 1996.

It seems from bite marks left by invertebrates on the bones that the dinosaur died and was nibbled at in the ocean, it likely drifted into before eventually being covered in sediment and fossilized in an area that slowly became part of the Italian Alps.

The dinosaur is estimated to have weighed 1 ton, measuring 7.5 meters in length when alive and was armed with sharp serrated teeth similar in form and function to other theropod dinosaur teeth as well as living Komodo dragons.  Uniquely S. zanellai has three fingers rather than four as would be expected and seems to have some features common to later dinosaurs mixed with those of earlier dinosaurs.

The new dinosaur is important in showing the state of dinosaur evolution at that time.  Despite the probability of Ceratosaurians in the Triassic, we know very little about these early theropod dinosaurs.  The end of the Triassic represented a major extinction much less famous than the one that killed off dinosaurs. So the beginning of the Jurassic represent a time when new forms were evolving and filling niches left open by the earlier extinction event.

It seems that Saltriovenator zanellai is just one example of an explosion in the diversity of Ceratosaurians spreading across the world.  Examples of other dinosaurs from Morrocco, South Africa, Massachusetts, Antarctica and elsewhere seem to reflect this interpretation of dinosaur evolution.  In their paper, the scientists, Cristiano Dal Sasso​, Simone Maganuco and Andrea Cau describe the importance of the find to dinosaur paleontology,

“…In this context, the discovery of a new specimen from the Sinemurian of Italy is extremely relevant as it is among the oldest Jurassic theropods, it is larger than all other pre-Aalenian theropods (see Skeletal reconstruction and body size section, below) and it improves our knowledge on some of the macroevolutionary patterns that would have characterized the evolution of Theropoda during the Jurassic. It also represents the first dinosaur skeleton from the Italian Alps, the first of Jurassic age, and the second theropod skeleton found in Italy…”

In the evolution of birds more generally, this find also represents a new piece of information on the formation of bird hands (and eventually wings).  The fossil shows that long before evolving into wings, the arrangement of bones in dinosaurs were for grasping and struggling with prey. Today, we’re more accustomed to thinking of living dinosaurs (birds) as having no real hands at all but wings, flippers or nearly useless vestiges.  While munching on hot wings or watching birds sitting on a wire, it’s interesting to reflect on the amazing power of evolution over mind boggling lengths of time.

It’s likely that older Ceratosaurian dinosaurs are still hidden somewhere waiting to be found.  Paleontology itself is a speculative science relying on necessarily incomplete physical evidence and hypotheses based on the best of this evidence.  This discovery if anything verifies what scientists have thought about the origins of theropod dinosaurs, showing that they were evolved into something similar to what we expect later in geologic history by the Jurassic.  Scientists speculate that they may have existed even earlier than that. This discovery also shows that Europe played an important role in the evolution of theropod dinosaurs and opens up new possibilities of where to look for them.