"Oral plug" prevents whales from drowning while they eat • Earth.com 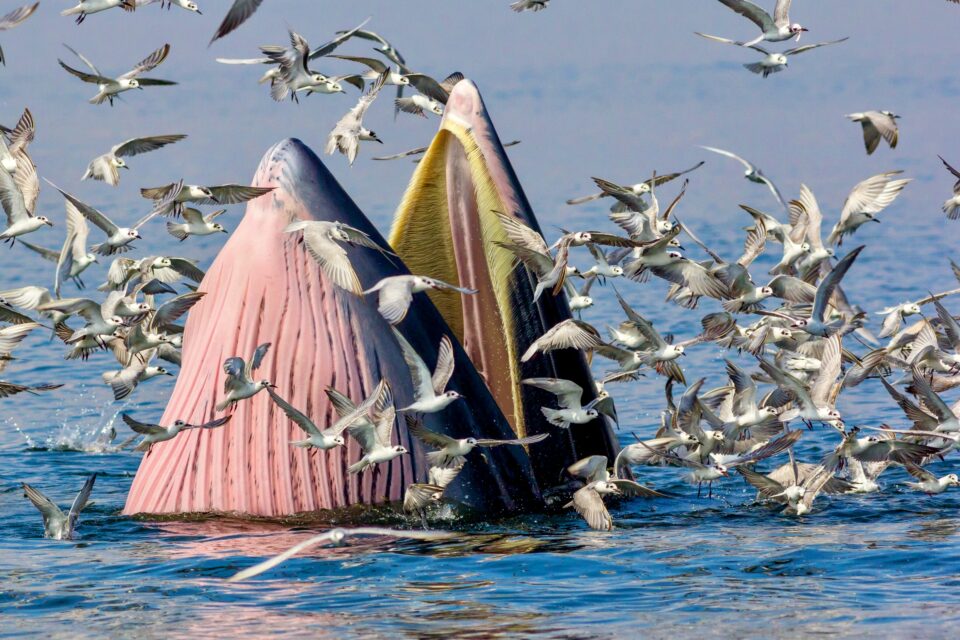 Mammals have a pharynx, or throat, that starts at the back of the nose and ends below the back of the mouth. Although the pharynx is a single tube, it leads into two separate tubes – the windpipe, through which air reaches the lungs, and the esophagus, through which food reaches the stomach. The separation of the respiratory and digestive tracts at the base of the pharynx is critical for survival; air must be directed from the pharynx into the lungs, but food must be directed towards the stomach and must not enter the lungs.

This anatomical arrangement presents problems for mammals, who must avoid inhaling their food when they try to swallow it. This is the cause of choking and can be fatal. The situation is even more complicated for baleen whales, which feed while underwater. They open their mouths wide and lunge through a shoal of fish or small invertebrates, taking in numerous small prey items along with thousands of liters of water that must not flow into the windpipe.

Researchers at the University of British Colombia in Vancouver have recently published a study that shows how baleen whales, also known as rorquals, achieve the separation of respiratory and digestive tracts while their mouths experience these extreme physical forces. They identified an anatomical mechanism that protects the whale’s airway as tons of water gushes into its mouth – they term this bulbous region of the soft palate the “oral plug.”

“We discovered a structure in fin whales, which likely exists in all lunge-feeding whales, or rorquals,” said Kelsey Gil of the UBC Zoology Department. “We’ve termed it the ‘oral plug’ and found that it blocks the channel between mouth and pharynx. It means that when a whale lunges, the entrance to the pharynx and thus the respiratory tract is protected.”

Although the mechanics of lunge feeding by whales was well understood, not much was known about how prey such as krill are manipulated and swallowed after a lunge. In addition, the general anatomy of the larynx was also well known. This is a hollow organ in the upper airway that is also the location of the vocal cords and has been investigated in connection with whale vocalizations. However, not much was known about the structure of the rest of the pharynx, the critical junction between respiratory and digestive tracts.

“It’s impossible to study this in a living whale, so we rely on tissue from deceased whales and use functional morphology to assess the relationship between a structure and its function,” said Gil.

By examining and dissecting adult and fetal fin whales, the researchers found that a musculo-fatty structure, the oral plug, seals the back of the mouth and pharynx when the whales feed. They manipulated the various structures to see how they could move. They also looked at the direction of muscle fibers to understand how they would move when muscles contracted and shortened.

“The oral plug is a part of the soft palate, so simply considering the gross anatomy, there is only one direction it should move,” explained Gil. “When the oral plug moves backward and upward to block the nasal cavities, it means that no other structure can be in that same spot below the nasal cavities. This forced us to then examine the larynx, since that spot is where we would expect to see the larynx during breathing, but it cannot be in that position during swallowing.”

During swallowing, the oral plug is lifted and this allows food to pass from the mouth into the pharynx. At the same time, the lifted plug protects the upper airways from food entry. The larynx is positioned at the floor of the pharynx, where laryngeal cartilages close to protect it. A muscular sac attached to the bottom of the larynx is forced upwards into the laryngeal cavity to completely block the lower respiratory tract.

The findings, published in the journal Current Biology, also show that the pharynx in fin whales – and likely all rorquals – can only be used by either the respiratory or the digestive tract at any one time. This protects the animals from choking while feeding.

According to the researchers, no structure like the oral plug has been reported in any other animals. “There are very few animals with lungs that feed by engulfing prey and water, so the oral plug is likely a protective structure specific to rorquals that is necessary to enable lunge feeding,” said Gil.

The study authors conclude that these adaptations to facilitate swallowing in lunge-feeding whales were a critical development in the evolution of large body size. The largest animal species ever to have lived is thought to be the blue whale, which feeds in precisely this way.