The curious case of the Osage orange and the megafauna extinction • Earth.com 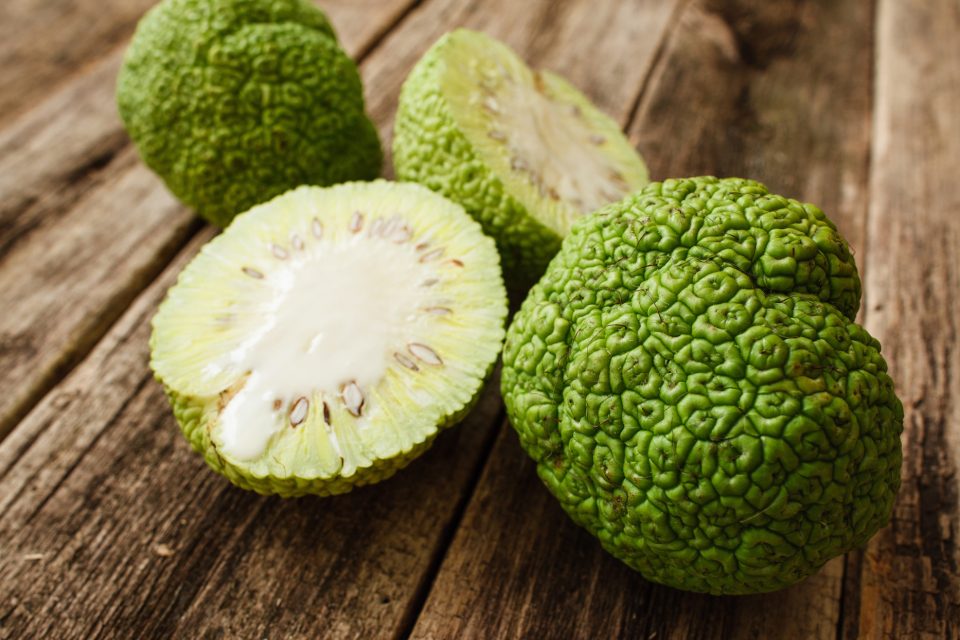 The curious case of the Osage orange and the megafauna extinction

Students of natural selection will know that animals, plants, and other living things affect each other’s evolutionary trajectories. Prey species evolve cryptic coloration and cautious habits to avoid predators. Predators evolve exquisitely tuned senses that allow them to sense their hidden prey. Parasites diverge and end up specializing in one species or another.

Sometimes, these relationships develop in tandem such that certain species are said to co-evolve. That is, their habits and interactions, over time, affect each other in perceptible, tangible ways. Species may in fact become dependent on one another for survival.

Some scientists have argued that this is is the case with the bizarre Osage orange (Maclura pomifera), a species of North American tree that bears grapefruit-sized, knobbly green fruits named for the Osage tribe of Native Americans. Also known as the horse apple and bois d’arc (for its use in bow-making), the species is most closely related to figs, jackfruits, and mulberries in the family Moraceae. These enormous fruits appear to have no current dispersal agents, or animals that spread their seeds. Anyone who has a mulberry tree in (or anywhere near) their yard will be intimately acquainted with the dispersal phenomenon. Mulberry seeds excreted by the birds that feed on the fruits pop up as seedlings in even the most assiduously tended garden beds.

While relatively widespread, the current distribution of the Osage orange is almost exclusively attributed to human intervention. At the time of European settlement of the Americas, they were restricted to the Red River Valley in Texas, Oklahoma, and Arkansas, and maybe Kansas, Louisiana, and Missouri. Prior to the last ice age, however, these plants and their relatives were widespread throughout North America; there were some 7 species of Maclura.

Their current distribution is purely a function of their use as hedges by European settlers. Why might this once ubiquitous species have contracted to such a small fraction of its former range? Many scientists believe that the tree was once spread almost exclusively by herbivorous megafauna, likely wiped out by humans at the end of the last ice age some 11,700 years ago.

Everything about the Osage orange, and similarly large-fruited North American trees such as the Kentucky coffee tree (Gymnocladus dioicus), honey locust (Gleditsia triacanthos), paw paw (Asimina triloba), and persimmon (Diospyros virginiana), suggests that it coevolved with massive herbivores. Its fruits are enormous in comparison to most species and it drops them when they are unripe or just ripe, indicating that their intended consumers were likely to pick them up from the ground rather than pluck them from its branches.

Plants do not expend the enormous amount of energy that it takes to produce such large fruits without the promise of a payoff; attracting large herbivores who would be likely to spread its seeds might have constituted such a bargain for the Osage orange. Its fruits contain high levels of toxins that deter most smaller frugivores or compel them to eat only small portions. Those that do, such as squirrels and deer, either only feed on the fruit itself in situ or destroy the seeds, making them unlikely candidates for dispersal.

And it sports an intimidating armature of spines that seem likely to deter large browsers and serve no apparent function in the current ecosystem. In contemporary ecosystems that feature large herbivores such as elephants, similarly sized fruits are often spread by them, notably wild gourds in the family Cucurbitaceae, which are relatives of the well-known squashes, cucumbers, and pumpkins in cultivation.

All of this evidence combines to suggest that Osage orange fruits were likely ingested and then later excreted by large herbivores such as the American mastodon (Mammut americanum) and giant ground sloths (order Xenarthra), thus spreading their seeds. In the absence of such herbivores, their seeds were unlikely to spread by any other means than by water, explaining their persistence in river valleys. The extinction of these large mammals is tightly correlated to the arrival of humans in North America, who, according to a prevailing theory, hunted them out of existence using recently developed stone-tipped spears originating with the Clovis people. (Some studies have suggested that even earlier cultures contributed to this decline or that climate change was to blame for their extinction.)

Studies and anecdotal evidence regarding large modern herbivores such as cows and horses that eat large fruits such as the Osage orange have corroborated the dispersal theory. Farmers note that horses are typically quite fond of the mysterious green globes and report that they often find new Osage orange seedlings far from the parent trees, but within their horses’ enclosures, suggesting that these modern equids are indeed dispersing the seeds just as their more massive predecessors did.

A 1982 study in Costa Rica found similar effects from cows and horses on large fruited trees with no contemporary dispersal agents. Conversely, other studies have shown that modern elephants, while willing to eat some Osage oranges, did not significantly affect the germination of the seeds passed through their digestive systems.

Though they likely wiped out the Osage orange’s primary disperal agents, Native Americans may have actually been responsible for its persistence. According to one theory, the highly successful Spiroan culture had a monopoly on the production of bows from Osage orange wood, though to be the best material for these essential hunting tools. Osage orange wood is wonderfully flexible and is thought to be the most rot-resistant wood in North America.

Bows made of Osage orange wood were discovered thousands of miles away from the source, suggesting active trading between Native American cultures. European settlers prized the tree for its dense and impenetrable branches, which could be shaped by pruning into a hedge “horse high, hog tight, and bull strong.” The tree’s current range is a function of its use in a government program intended to mitigate the effects of the Dust Bowl; a 100-mile-wide stretch of land bisecting the United States was planted with Osage orange hedges in a plan called the Great Plains Shelterbelt. Such hedges were also often used to contain livestock prior to the invention of barbed wire in the mid-1800s. Many persist in fragments to this day.

All of this, of course, is rather speculative. The animals that might prove this theory are long-extinct and cloning projects, while intriguing, are a ways off. Nonetheless, it is worth contemplating: are these plants in effect, as one writer put it, “evolutionary ghosts”?