Otters in Chicago? The story behind their Illinois comeback • Earth.com 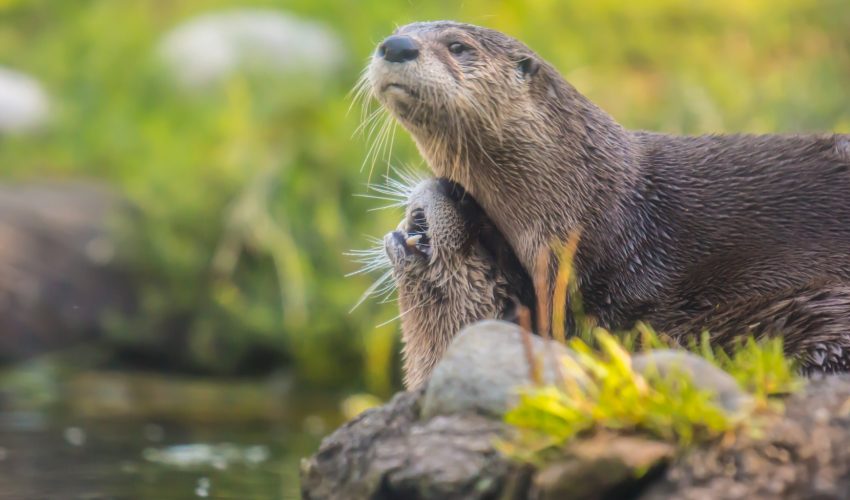 Otters in Chicago? The story behind their Illinois comeback

For all of its beautiful natural areas, Illinois isn’t a prime place for seeing large wildlife. White-tailed deer are abundant, for sure. And coyotes have adapted surprisingly well to urban areas and farmland alike. But black bears, mountain lions, and gray wolves have been extinct at a state level since the 1800s. The area’s apex predators, with the exception of coyotes, tend to be on the small side: foxes, hawks, the odd bobcat. In the past several decades, though, a sizable addition to this cohort has been slowly gaining ground.

The North American river otter (Lontra canadensis), a member of the mustelid or weasel family that can reach up to 30 pounds and 53 inches in length, has become increasingly common in Illinois ponds and rivers. Once widespread—an 1832 report remarks on their ubiquity—otters were nearly extirpated from the state by the late 1800s.

Perhaps two relict populations remained, one in southern Illinois, and another on the Mississippi River in the northwest. Poor water quality, habitat loss, and trapping all contributed to the species’ decline on the state level. By 1929, the otter trapping season was curtailed. These lolloping semi-aquatic teddy bears were declared a threatened species in 1977 and endangered in 1989. By that time, the number of otters in Illinois was thought to be fewer than 100.

In an effort to reverse the deteriorating fortunes of the otter, beginning in 1994, the Illinois Department of Natural Resources began implementing a plan to reintroduce the species to the state. (Other states, including Indiana, Iowa, Kentucky, Missouri, and Tennessee, enacted similar programs in the 1980s and 1990s as well.) Over a three year period, 346 otters trapped in Louisiana were released in waterways in southeastern and central Illinois. The state’s rivers and lakes were in fact primed for an otter resurgence.

Due to restoration efforts and increased attention to conservation motivated by legislation like the 1972 Clean Water Act, conditions had improved in many bodies of water, creating better habitat for their primary prey, fish. Beavers had rebounded as well, an important factor in creating otter habitat. Otters sometimes use abandoned beaver dens as their own and even occasionally prey on them. Perhaps more importantly, the ecological effects of beaver dams, which slow down running water and create ponds and wetlands, are appealing to otters.

The program was a resounding success. Despite fatalities in some of the introduced otters due to trapping, automobile accidents, and encounters with dogs, the species began to reproduce and spread. In 1999, they were moved from the state endangered list and onto the threatened list. By 2004, they had been delisted. By 2009, population levels were thought to have risen to 11,000 and by 2014, they were thought to have reached 30,000. The population rebounded to such an extent that a trapping season was allowed in 2012 for the first time in close to a century.

Otters are now found in every county in Illinois —including Cook County, which encompasses Chicago and its surrounding suburbs.

In November 2015, a male otter was captured in the southwestern part of Cook County by biologists with the Forest Preserve District of Cook County. It is worth noting that the sites where otters were reintroduced in the 1990s are 150 miles south of Chicago. Otters are known for having extensive ranges—especially males, which may have territories that extend along over 50 miles of river and may roam over 90 miles in search of hospitable waters.

The trapped otter was taken to Brookfield Zoo, where a transmitter was implanted, allowing biologists to track its movements. Several other otters were trapped and equipped with transmitters in 2016. That year, an otter sighting was reported in downtown Chicago, which is bisected by the Chicago River. Though it was not verified, biologists noted that it wasn’t outside the realm of possibility. The Chicago River, once a filthy runnel, has seen massive improvements in recent years. Some 60 species of fish are now present, providing ample prey for the piscivorous mammals.

A number of studies have demonstrated that otters may even be eating invasive Asian carp—actually several species of carp referred to colloquially by that name. Otters prefer surface-dwelling fish and Asian carp fit the bill. A 2015 study from Southern Illinois University noted that silver carp (Hypophthalmichthys molitrix), one of the species referred to as Asian carp, was present in some fecal samples. This is an encouraging sign. While otter numbers aren’t so high that they are likely to stem the invasion of the carp, any predator of this determined fish is a good thing.

And it’s good for the otters too…because the silver carp feeds on plankton, it is less likely to accumulate toxins than other species at higher trophic levels. It is thought that accumulated toxins from other predatory fish may have contributed to the otters’ decline. The urban otters of Cook County have been observed feeding on other unusual items as well. Long thought to avoid carrion, they have been seen eating roadkill. Though they do love their fish, they also eat birds and turtles as well as invertebrates such as insects, crayfish, and clams.

Much of this activity happens during the early daylight and evening hours—so don’t get your hopes up if you’re out for an afternoon boat ride in Chicago. As large and charismatic as they are, otters are secretive and difficult to detect. One of the main signs of their presence is the appearance of public “latrines”—areas where they deposit feces, urine, and scent secretions. These are thought to be territory markers. So, unless you get your kicks from searching for otter toilets—no judgement—you’re not terribly likely to see signs of their presence. Even so, the knowledge that they’re there is a heartening sign of ecological resilience.