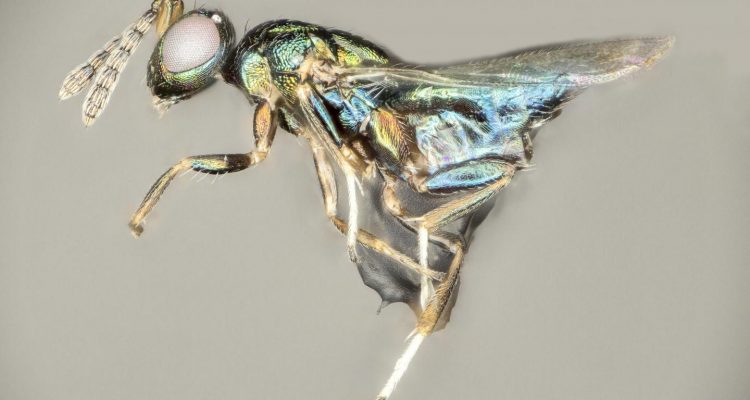 Like a tiny insect kingdom version of the sci-fi flick Alien, the scene that plays out between two wasp species is shocking and quite gory. You see, when a baby Euderus set parasite wasp hatches, it burrows out of its egg before tunneling through another obstacle – its wasp host’s head.

According to a paper in the journal Zookeys, the Euderus set, or E. set wasp, enters oak trees that are inhabited by gall wasp. Once inside, the E. set’s work begins. It lays an egg inside a developing gall wasp (Bassettia pallida) and then…  Then we wait.

Typically, the gall wasp would mature inside the crypt – otherwise known as the gall – and happily tunnel out when spring arrives. Once it’s host to the E. set, the gall wasp becomes like a zombie. The E. set takes control of the gall wasp, forcing it to begin tunneling out of an emergence hole that’s too small.

When the gall wasp attempts to exit through this hole, its head gets stuck. Then the E. set munches the its host’s internal organs before making a dramatic exit through its head.

“It could be the parasitoid cues hosts to excavate early, but makes them do it less well than usual,” said Weinersmith of the gall wasp’s ill-timed tunnel attempts. “They only go part way and then they get stuck.

“That’s what I love about parasite manipulation of host behavior,” she continued. “So many of the stories that have been uncovered are just as cool as the coolest science fiction movie.”

The E. set was named for Set, the Egyptian god of chaos and evil. Set shared the wasp’s murderous ways, trapping his brother in a crypt, killing him and then dicing him into pieces.