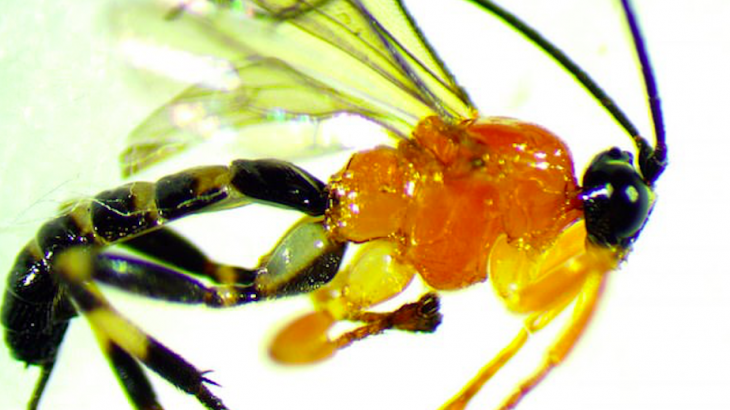 The animal kingdom is filled with parasites that attack their hosts, sometimes even taking control of their host’s nervous system or brain, effectively turning an unsuspecting ant or spider into a zombie.

Researchers from the University of British Columbia (UBC) were studying parasites in the nests of Anelosimus eximius spiders in the Ecuadorian Amazon when they discovered something unusual.

The researchers observed that some of the spiders were isolating themselves away from their colony, which is strange because Anelosimus eximius are highly social species.

The spiders are only one of 25 species of social spiders that exist worldwide, and the spiders work together in their nests raising young, capturing prey, and cooperating in large colonies.

The researchers discovered that the spiders were being “hijacked” by a parasitic wasp from the genus Zatypota.

In a new study published in the journal Ecological Entomology, researchers Philippe Fernandez-Fournier and Samantha Straus describe how the wasp can manipulate a spider into leaving its colony.

While parasitic wasps are nothing new, the researchers say that usually, wasps target solitary spiders.

“Wasps manipulating the behaviour of spiders has been observed before, but not at a level as complex as this,” said Philippe Fernandez-Fournier, the lead author of the study, in a UBC press release. “Not only is this wasp targeting a social species of spider but it’s making it leave its colony, which it rarely does.”

The researchers noticed that the spiders were infected with parasitic larva and this is why the spiders wandered away from their nests. The wasps were laying their eggs on the spiders’ stomachs.

The infected spider then spins an enclosed ‘cocoon web” where the newly hatched larvae eventually eat it.

“The wasp completely hijacks the spider’s behavior and brain and makes it do something it would never do, like leave its nest and spinning a completely different structure. That’s very dangerous for these tiny spiders,” said Straus.

The researchers are not sure exactly how the wasp is able to manipulate its spider hosts, but one possible hypothesis is that the wasp injects the spider with hormones that confuse it.