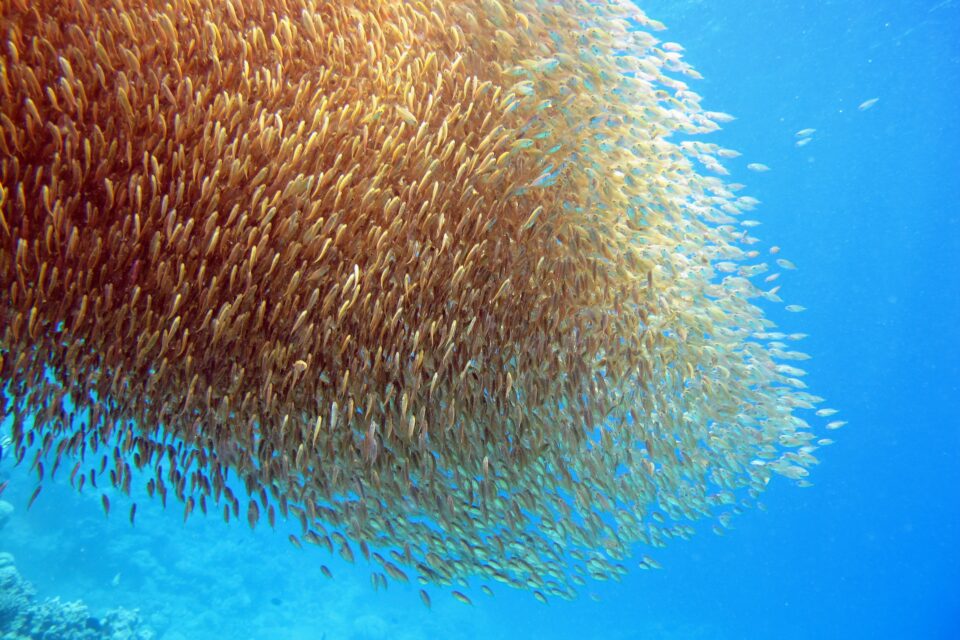 Food availability for ocean predators, in general, is rather low. In fact, captive marine animals fed the average food concentrations, measured in the oceans using nets and pumps, do not survive. Since this phenomenon was originally investigated and described by Reuben Lasker in the 1970s, it is referred to as the Lasker food paradox.

In new research, a team led by Kelly Benoit-Bird of the Monterey Bay Aquarium Research Institute made use of sonar, or active acoustics, to get a better understanding of the distribution patterns of food in the ocean. The researchers attached acoustic sensors to a variety of platforms, including ships, profilers, moorings and autonomous vehicles, to send out and receive sound pulses about the distribution of ocean species.

“We’re using systems much like those used to find the depth of the ocean, but instead of interpreting echoes from the seafloor, we’re using more sensitive systems that allow us to map layers of life in the water,” said Benoit-Bird. “What we’ve found is that animals of all different sizes, from millimeter-long plankton to large predators, are unevenly distributed, and this variation is really important to how life in the ocean functions.”

The results show that ocean organisms are often aggregated in hotspot areas, that are missed by traditional sampling methods and tools. Such aggregations are found in all ocean habitats, from surface to very deep waters, and from the tropics to the poles. Organisms as diverse as plankton, fish, squid and whales all collect in patches rather than being evenly distributed throughout oceans.

This leads us to understand that ocean food and biota have a 3D distribution that varies with depth and location. Animals must find and exploit these small-scale aggregations of resources if they are to survive.

Benoit-Bird’s results explain the apparent paradox described by Lasker, who found that laboratory animals fed the average concentration of ocean food did not survive, but ocean-dwelling animals in the wild did. Oceanic animals do not survive on average food concentrations but are well-adapted to locating and capitalizing on patches of resources, thereby reducing their total energy expenditure in the process.

“For example, if a bucket’s worth of popcorn was spread out evenly throughout the volume of a room, and you had to fly around to capture each kernel, you would spend a lot of energy searching and it would be hard to get enough to be full,” Benoit-Bird said. “If instead, the popcorn was all grouped together, the popcorn would be a much more satisfying snack. The amount of popcorn is the same but changing how it is grouped determines whether you end up with a full belly.”

“Acoustic tools provide the high spatial resolution and long duration sampling to explore the processes that drive organismal interactions in the ocean. We must understand not only how many animals are in the ocean, but how they are distributed, if we are to effectively manage our living marine resources.”

Benoit-Bird will be presenting the findings this week, at the 181st Meeting of the Acoustical Society of America.