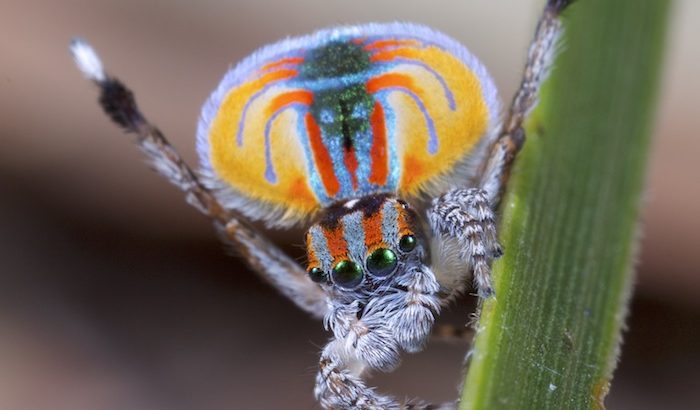 It’s well known that birds put on shows to attract and bond with mates.  Dances, wild vocalizations, and perhaps even elaborate nest building are all a part of the scene.  Among large animals like elk, males are likewise known to fight for access to females. Mating behavior among insects and arachnids have attracted much less attention, that is with the exception of some gruesome examples.

Black Widow spiders earned their sinister nickname for a propensity of females to eat mates.  In a similar fashion, species of female praying mantises are known for killing males that mate with them.  Sometimes, a female will turn her head around and bite off the male’s head while they’re actually still copulating; the headless body continues.  These are only a couple of particularly lurid examples of invertebrate mating behaviors. It turns out that there is a diversity of behaviors exhibited by mating arthropods and some of these behaviors are beautiful.

The aptly named peacock spider (Maratus volans) is a superstar when it comes to arthropod mating displays.  Peacock spiders are part of the jumping spider family (salticidae), a family of tiny, quick, far roaming spiders.  Jumping spiders often surprise humans with their swift, athletic movements but they’re harmless to us. Confined to just a small part of Australia, the peacock spider is only about 5 mm long.  In a fashion similar to the pea fowl they’re named after, the male peacock spider is vibrantly colored while the female is more drab.

Male peacock spiders have green and yellow abdomens striped with an almost fluorescent blue.  When trying to attract a mate, the male peacock spider first waves his third pair of legs to advertise his presence to a prospective female.  If simply waving doesn’t work, the male will clap his legs together to get attention. If the female is interested and starts to approach the male, he will shake his abdomen vigorously.  As things get more interesting, the male spider will raise his abdomen so it’s vertical. The abdomen of a peacock spider is normally thin but flaps fold out of the sides of the male spider’s abdomen when he raises it, giving the abdomen a more rounded fan-like look.  With the abdomen raised and fanned out, it’s truly reminiscent of the tail of a peacock or displaying male turkey.

The visual display is only part of the story of the peacock spider’s mating success.  Researchers have long known that the male peacock spider also ‘sings’ to his prospective mate through vibrations.  The mating display of the peacock spider was first filmed almost ten years ago by Australian biologist, Dr. Jürgen Otto, but only recently have researchers looked more closely at whether the mating display or the ‘singing’ plays the biggest role in the success of the male spider.

In an experiment, scientists observed spider mating success under different circumstances.  Male spiders displayed for an unmated female either under full spectrum light or light with reduced spectrum.  Spiders were also on a substrate that easily transmitted vibrations or that muffled them. In this way, scientists were able to tease out whether the impressive visual display or the song of vibrations was more important to interested female spiders.  Previous research published by The Royal Society shows that both the vibrations and visual display have an effect and the more time a male spends displaying, the more likely his success.  This new study was the first to examine whether visual displays or vibrations were the most important.

Unsurprisingly, given the flashy nature of the peacock spider, the visual display was found to be more important than the vibrations.  Strangely, when the researchers used reduced wavelength light but turned up its brightness, mating success increased. This detail shows that it’s contrast/patterning that the females are responding to, not necessarily color.  Interestingly, the color and pattern on male peacock spiders are produced by tiny colored hairs; like feathers on a bird’s tail.

With the females responding to the flashy display rather than the subtle vibration, many may wonder why vibrate at all.  At some points the female spider may turn away from the displaying male, this is when he vibrates more. The vibrations seem to draw her back into watching the visual display of the male, so there may be something of an indirect aid from vibrations for the male peacock spider.

The research was published in the November/December 2018 issue of Behavioral Ecology.  The study focused on just one species of peacock spider but it’s worth noting that according to Cell, there are at least 40 species of spiders in the genus Maratus, many of them displaying similarly vibrant but different displays than M. Volans.  According to expert Dr. Jürgen Otto, there are now 74 named species of peacock spiders.  Many of these spiders and their impressive displays can be seen on his YouTube channel or on his official site.  Some of the spiders are nearly as bright and colorful as mantis shrimp, others are black with white skeleton-like markings.  All of the peacock spiders so far are endemic to Australia. The amazing thing is that put into context 50 spider species found in one part of Australia is next to nothing compared the global spider population and diversity.

We know so very little about the invertebrates that are so common everywhere we go on earth.  This is especially true of spiders that are omnipresent in almost every human habitation as well as lawns, farm fields, and businesses.  Spiders are like a quiet and rarely noticed force that keeps the world running smoothly.

A paper in The Science of Nature estimated that spiders the world over eat 400 to 800 million tons of prey a year.  The Independent points out that this is more than the weight of every human on Earth.  To put it as the paper itself does, this is 1% of the earth’s terrestrial production; 1% by mass of all animals produced in a year.  Most, roughly 90%, of these are insects. Clearly, spiders are important. Next time you see a male spider trying desperately to attract the attention of a female without being eaten by her, think kindly of all those insects the spider ate before they bit you.