Peregrine falcons from both coasts found contaminated with mercury • Earth.com 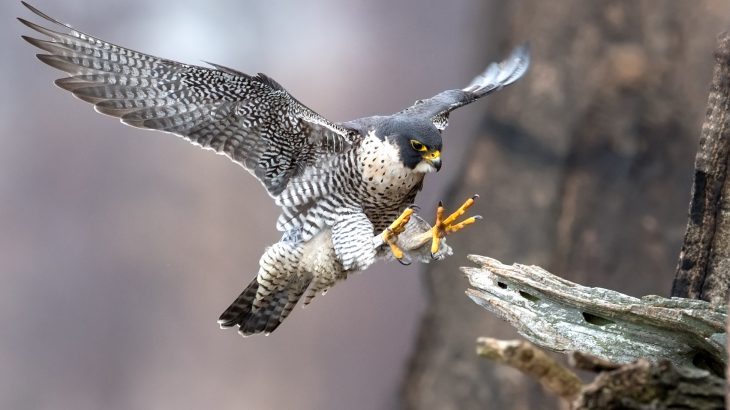 Peregrine falcons from both coasts found contaminated with mercury

Mercury contamination has spread to peregrine falcons both in the United States and worldwide, according to new research.

Joe Barnes, a Nevada Department of Wildlife biologist, has spent the past decade testing peregrines for mercury contamination in Nevada, Washington, Maryland, and along the Gulf Coast of Texas.

So far, over 700 birds have been tested by Barnes, and every single one showed signs of mercury contamination.

Falcons that typically migrate from remote regions like Greenland or Alaska still contained lower levels of mercury in their feathers despite being far away from cities and pollution.

“Every single one of them was impacted, regardless of whether they live in wide-open desert or Lake Mead or Greenland or coastal British Columbia,” Barnes told the Las Vegas Review-Journal.

Barnes published his latest findings in a new study in the Journal of Raptor Research.

Trapping falcons to test their feathers for mercury levels is not an easy feat, and Barnes has to use live pigeons to snare one of nature’s fastest predators. Barnes also analyzes feathers left behind in falcon nests from a meal.

Peregrines are raptors and ingest mercury through their prey which includes almost anything that flies. According to Barnes, they are one of the most impacted species when it comes to mercury contamination.

Mercury is a naturally occurring heavy metal, but industrial operations have increased mercury pollution drastically over the years.

The widespread contamination of mercury in peregrines is especially problematic because mercury levels between five and 15 parts per million have been shown to impact breeding.

“Mercury pollution is a global issue, and even low levels of exposure can impact human and wildlife health,” Ryan Bourbour, a biologist at the University of California, Davis, told the Las Vegas Review-Journal.  “So assessing exposure levels in top predators, such as peregrine falcons, can help us biomonitor mercury pollution trends, which may have conservation implications and even human health implications.”