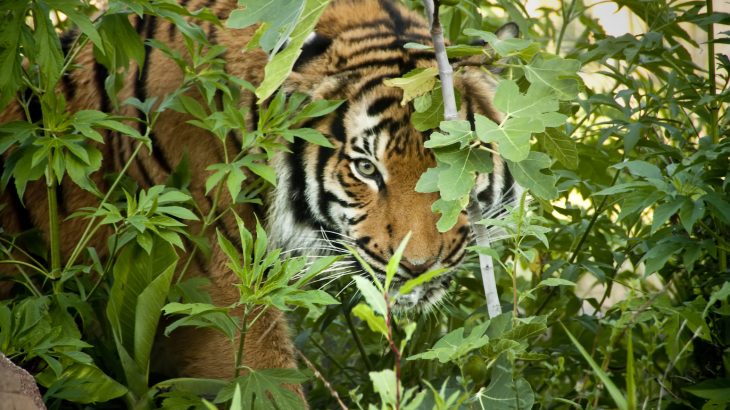 Recent tiger seizure illustrates pet tiger problem in the US

There’s a reason that tigers and pets are not often associated with each other. Our pets are cuddly and innocent companions while tigers are majestic, yet fierce wild animals. But right now, the United States has a pet tiger problem that was made all the more apparent by recent news of a tiger left abandoned in a Texas home.

In early February, a person entered an abandoned home in Houston, Texas to smoke pot. Inside, the person found a tiger living in small cage, according to KTRK. Thankfully, the tiger was able to be relocated to a Texas sanctuary to live out the rest of its life.

While this story is certainly bizarre, it is not uncommon to find tigers living as pets in the US. In 2003, a Congressional report estimated that there are as many as 11,500 tigers living in private homes in the US. Other estimates put the US captive tiger population at 5,000. It is difficult to calculate an exact number of pet tigers as there is no universal database for these pets.

Either way, it is believed that there are now more tigers living in captivity in the US than in the wild throughout the world. The tiger is currently listed as Endangered and its population is estimated to be less than 4,000.

The import, export and sale of pet tigers are regulated by US and international laws when they occur across country and state borders, but the sale of pet tigers can occur within state lines and in the illegal wildlife market. State laws also vary on the private ownership of big cats with some states outright banning it and other states having no laws on the subject.

The private ownership of tigers is a cause for concern for a variety of reasons including public safety risks. Tigers are inherently wild animals, and strong ones at that. They are highly territorial and use their body weight to knock their prey down and bite their neck to kill them. Private owners are unlikely to be able to properly control a pet tiger in the case of an attack. From 1990 to 2006, captive tigers in the US attacked at least 27 people, killing seven people and severely injuring 20, according to TRAFFIC.

Even police departments are often ill-prepared to handle pet tigers. In 2017, police officers killed a loose tiger that was roaming around Atlanta, Georgia. The local police officers do not carry tranquilizers on hand and officers decided to shot the animal after it began to enter a densely populated area, USA Today reported.

Animal welfare is another concern that comes with the private ownership of tigers. Tigers are not your run-of-the-mill pet. They do not simply require a bowl of food and water to survive. A full grown tiger can consume 20 pounds of meat a day and needs a safe and stimulating environment. Boredom can be very dangerous in predatory animals and tigers without proper enrichment may attack out of agitation. Lack of animal welfare can, therefore, increase concerns about public safety.

Owners may buy a tiger as a pet when it is an adorable and small cub. Once they become fully grown adults, the owner is likely to become overwhelmed with their pet. According to the 2003 Congressional report, many pet tigers are abandoned after they reach 300 pounds.

The fate of these unwanted tigers is murky. It is unclear what would have happened to the tiger in Houston if someone had not been searching for a spot to smoke pot. The animal could have very likely starved to death.

Advocates of the private ownership of tigers claim that captive tigers can help preserve the species by being reintroduced into the wild, but pet tigers often live in a far different environment than their wild counterparts. The chances of pet tigers surviving in the wild are low. Additionally, many zoos are unwilling to take in pet tigers due to concerns over available space and genetic diversity. It is often up to overburdened wildlife sanctuaries to step up if an owner wants to relinquish a pet.

Recognizing the current pet tiger problem in the US, Congress has previously introduced the Big Cat Public Safety Act to prohibit the breeding and possession of dangerous big cats including lions, tigers, leopards and cheetahs.

But this week, it was announced that the Big Cat Public Safety Act was reintroduced in the US House of Representatives, championed by Reps. Michael Quigley (D-IL) and Brian Fitzpatrick (R-PA) along with 52 bipartisan cosponsors.

“From irresponsible breeding to inhumane living conditions and public exploitation, the mistreatment of big cats comes in a variety of forms,” said Rep. Quigley. “By introducing the Big Cat Public Safety Act, we are working to address a serious issue that causes immeasurable animal suffering and introduces inexcusable threats to human safety. State laws regarding private ownership of big cats are inconsistent or nonexistent, which is why a uniform federal law is necessary to end this dangerous industry once and for all.”