Of 6 separate tiger species, only 4,000 tigers remain in the wild • Earth.com 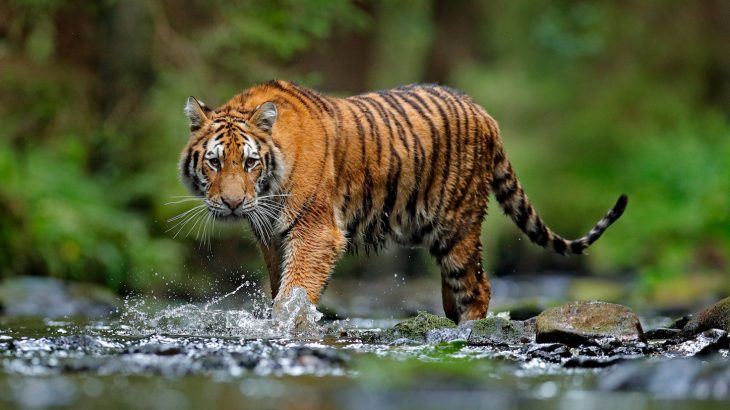 Of 6 separate tiger species, only 4,000 tigers remain in the wild

In an effort to better protect the less than 4,000 free-ranging tigers left in the world, researchers at Peking University in Beijing set out to finally find how many subspecies of tiger exist. After analyzing the complete genomes of the 32 representative tiger specimen, researchers now know for sure that there are six genetically different tiger subspecies.

The report of their findings, published in Current Biology on October 25th, list the six groups as followed: the Bengal tiger, the Amur tiger, the South China tiger, the Sumatran tiger, the Indochinese tiger, and the Malayan tiger. The report also notes that three other tiger subspecies have already been lost to extinction.

“The lack of consensus over the number of tiger subspecies has partially hindered the global effort to recover the species from the brink of extinction, as both captive breeding and landscape intervention of wild populations increasingly requires an explicit delineation of the conservation management units,” Peking University’s Shu-Jin Luo said. “This study is the first to reveal the tiger’s natural history from a whole-genomic perspective. It provides robust, genome-wide evidence for the origin and evolution of this charismatic megafauna species.”

Luo and his colleagues knew that using a whole-genome approach to reexamine the evolution of tiger species was the only way to see which subspecies of tigers had undergone natural selection to adapt to specific environments. Luo’s team found that, between tiger groups. there is low gene diversity. However, despite this, the team discovered that groups evolved separately and uniquely.

The differences between the above listed subspecies are mainly physical in terms of coloring and size. Despite a common ancestor, this evidence alone shows researchers natural selection was at play. Luo added, “In the end, we were quite amazed that, by performing a stepwise genome-wide scan, seven regions including 14 genes stood out as the potential regions subject for selection.”

With better understanding as to how tiger species and subspecies differ, the hope is that efforts to keep them from extinction can be more uniquely tailored to tigers in specific areas throughout the world.