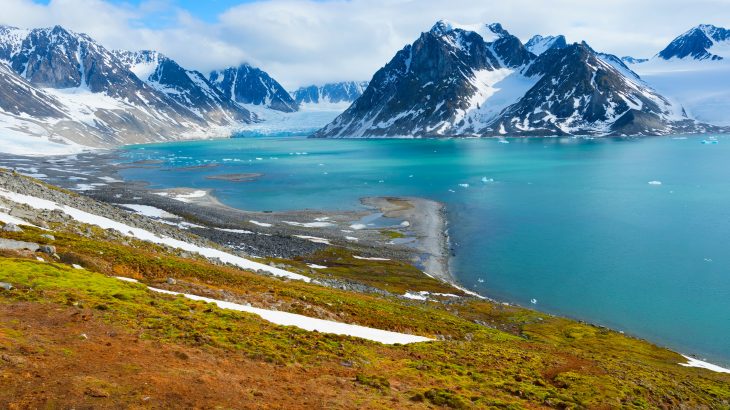 The analysis of a tiny shrub has revealed that plants across the Arctic region of Svalbard grow synchronously. The research suggests that the polar willow, Salix polaris, can play an important role as an indicator species for the health of the entire Svalbard archipelago.

Mathilde Le Moullec, a postdoctoral researcher at the Norwegian University of Science and Technology (NTNU), has been studying wildlife in Svalbard for years to gain a better understanding of how this unique community is interconnected.

Over four summers, Le Moullec looked for reindeer in Svalbard to evaluate their population numbers. She also hunted for bones and other reindeer remains that could be analyzed and carbon dated.

The data collected by Le Moullec revealed historical changes in the population size and distribution of reindeer in Svalbard. She documented how the reindeer rebounded after enduring centuries of overhunting.

In order to view the Arctic region from a greater perspective, Le Moullec decided to study the plants that reindeer eat.

“Salix is an important part of their main diet, especially because there is almost no lichen on Svalbard,” said Le Moullec. She pointed to previous research on Svalbard reindeer, which found that lichen makes up only two percent of their diets.

Le Moullec explained that by studying what controls the growth of the polar willow across Svalbard, you can also see how climate is affecting primary production in different places, including the growth of plants at the bottom of the food chain.

Furthermore, the polar willow contains an important geological record in its growth rings. “You can go to one place, one time, dig up a willow, and come back with 40 years or more of data.”

In 2015, Le Moullec and PhD candidate Morgen Bender struck out to some of Svalbard’s most remote regions to count reindeer. The team also dug up dozens of polar willows for analysis.

In the lab, the researchers counted the microscopic growth rings on the shrubs. Some of the willows were more than 40 years old, but the oldest was 70, which meant its growth rings were particularly small.

The researchers examined multiple cross sections from each plant. The tedious work in the lab took almost two years, according to Le Moullec.

Next, the team analyzed weather data to determine which of five weather-related factors were best reflected in tree ring growth. Out of the various weather factors, July temperature had the most influence on all of the willows examined from eight separate sites.

July temperatures were also found to have an effect on the rest of the vegetation in Svalbard, causing the plants to grow simultaneously. This timing is also significant for grazing animals like reindeer.

Synchronous growing patterns have been found before in boreal and temperate forests, where summer temperatures coordinate large areas of tree growth. However, this is the first time this kind of research has been done in the Arctic, explained Le Moullec, and in a tree where the largest structure – the root – is half the size of a pinky finger.

René van der Wal is a professor at the University of Aberdeen who has been studying plants in Svalbard since 1998.

“We knew that warm summers allowed high arctic plants to grow well, but always believed that this was what happened above ground,” said Professor van der Wal. “For Mathilde to show that good years above ground also means good growth below ground, and for this to reflect the productivity of all higher plants together is a major step forward.”

The study is published in the journal Oikos.