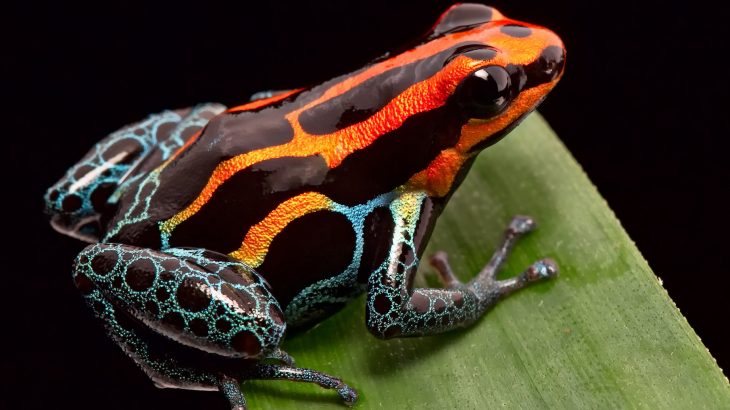 Poison dart frogs are able to develop a mental map

When researcher Lainy Day from the University of Mississippi first tested the ability of amphibians and lizards to store a mental map in their brains roughly 20 years ago, it appeared that none were capable of forming complex spatial memories.

At the time, Sabrina Burmeister of the University of North Carolina thought that Day should’ve tested the memories of poison dart frogs, as these amphibians can recall the locations of pools of water in the forest canopies where they hatch their tadpoles.

Now, Burmeister and graduate student Yuxiang Liu have published a study in the Journal of Experimental Biology that details their findings in determining whether poison dart frogs (Dendrobates auratus) have spatial awareness.

The standard for testing spatial awareness of rodents is the use of a Morris water maze, which is a platform submerged in a pool of water and surrounded by objects the animal can use to orient themselves in order to find the platform.

“We knew that the frogs hate to swim – they are terrestrial after all,” says Burmeister.

Liu placed a platform 2 cm beneath the water’s surface so that the frogs would be able to sit on the platform while still submerged, then immersed a second platform 0.8 cm below the surface on top in the southeast quadrant. Frogs that were able to locate the smaller platform were rewarded by Liu making the water slightly warmer.

Objects were placed around the walls of the pond to attract the frogs’ attention, including a red flashing light, an artificial yellow flower, a gently spinning blue fan, and green artificial leaves. Each object was located at one of the four points of the compass in order to orient the frogs.

Over two weeks, Liu repeatedly released the frogs at random locations on the large platform so that they could explore until they were able to reliably locate the shallow platform. Burmeister notes that the amphibians were quick to learn. The researchers then switched the locations of the landmarks, rotating their positions by 180 degrees, and removed the shallow platform.

The researchers concluded that these frogs were using a mental map of the platform’s location relative to the landmarks around the pool. It appears that not all frogs lack the ability to develop a cognitive map, and that mental maps can develop even in the brains of amphibians.