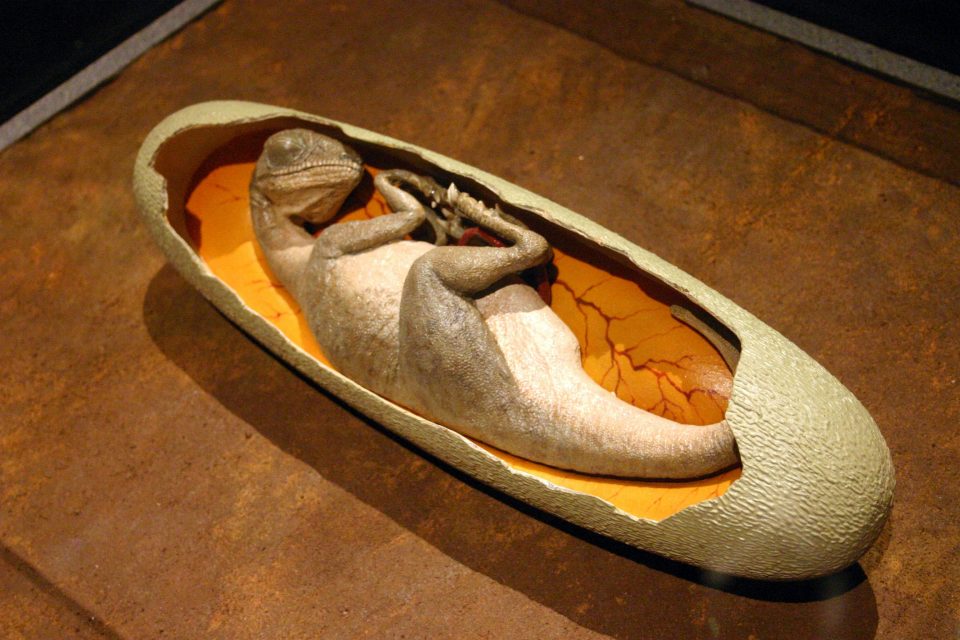 “And therefore think him as a serpent’s egg,

Which, hatch’d, would as his kind grow mischievous,

And kill him in the shell.”

Lucky for us, mischievous or not, plenty of dinosaurs were, like the titular emperor of Shakespeare’s play, killed in the shell. Natural disasters such as floods and landslides have preserved dinosaur eggs, including entire nests, on every continent but Australia and Antarctica. China in particular, followed by France, India, Argentina, and Montana in the United States, have proven to be particularly rich sites of discovery. The crushed shells of these ancient eggs have given us what we know about dinosaur reproduction and how—or if—they reared their young.

It is often misstated that the first dinosaur eggs were discovered in 1923 during an expedition by the American Museum of Natural History to the evocatively named Flaming Cliffs in the Gobi Desert of southern Mongolia. This expedition, funded by titans of industry including J.P. Morgan and John D. Rockefeller, did indeed unearth some remarkable dinosaur eggs, now attributed to the theropod Oviraptor. But, in fact, eggs had been discovered as early as 1859 in the French Pyrenees, though they were not identified as belonging to dinosaurs at the time. And other eggs had been discovered near Marseilles, France in 1900, and in Montana in 1913.

Intriguingly, the 1923 discovery included an array of Neolithic jewelry made of dinosaur egg shell fragments, indicating that our primitive ancestors had stumbled upon these ancient ova as well. Since that time, more than 200 hundred sites have been identified worldwide, most of them from the Late Cretaceous, near the end of the age of the dinosaurs. In a disappointing turn for Michael Crichton fans, only an armful of Jurassic-era eggs have yet been discovered.

Nonetheless, we have been able to extrapolate huge amounts of data from the late-era dinosaur nests that have been found. We have some idea of which dinosaurs exhibited parental care, for one. Ornithischian and sauropod dinosaurs appear to have nested in a style more similar to that of modern crocodilians than to that of birds, our living dinosaurs. Large numbers of eggs were deposited in depressions in the ground and buried. Their buried state can be discerned through shell analysis. More porous eggs are more likely to have been buried because they require humidity, as in a covered nest.

The quantities of eggs found in many such nests, and their disorganized arrangement, suggests that these dinosaurs, possessed paired oviducts as crocodilians do. This meant that they produced the entire clutch before it was laid all at once. The egg shell structure of these dinosaurs is also more similar to that of crocodilian eggs than those of birds. It can be inferred, then, that like crocodilians, ornithischians and sauropods exhibited minimal brooding behavior and may have had little or nothing to do with raising the young. Some hadrosaur eggs, though, have been found in dish-like structures and the unossified bones of the hatchlings found to resemble those of altricial birds, which require parental care. In many other species, the size of adults compared to that of the hatchlings might have made such care prohibitive. Imagine a 65-ton titanosaur bending down to feed a chick the size of a goose. 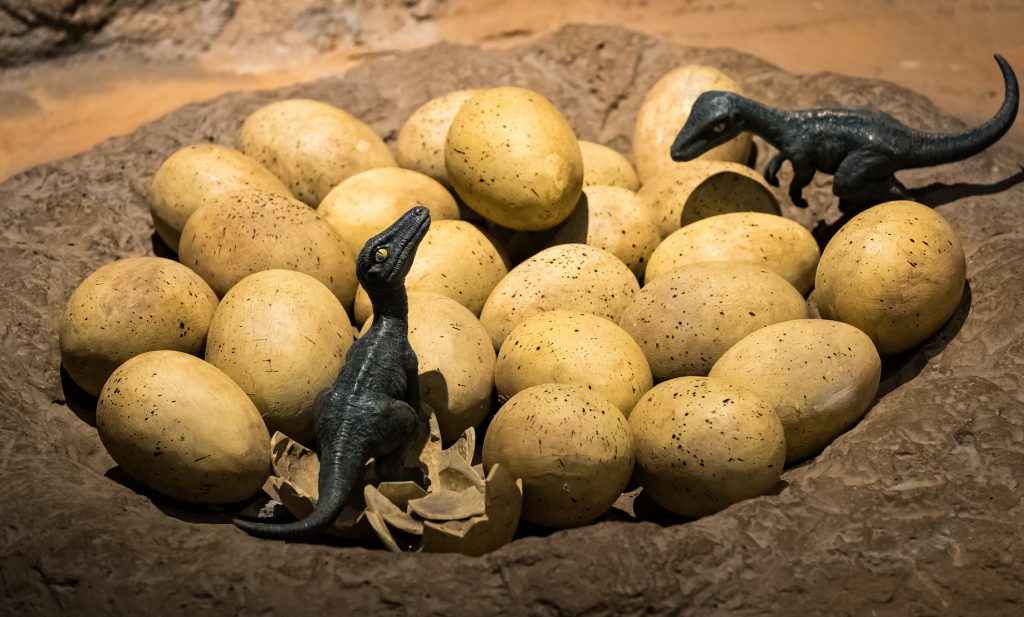 So, too, the time it took the eggs to hatch supports a theory of limited parenting. One study demonstrated that two ornithischians, Protoceratops and Hypacrosaurus, may have take six months or more to hatch, meaning that their parents would have needed to remain sedentary for half the year or more, thought to be unlikely due to seasonal migrations. Another study found that a large titanosaur from Argentina buried its eggs near hydrothermal vents in order to take advantage of their heat, obviating the need for incubation by the parent. Leaving your eggs in the care of the elements had its risks, though—some sauropod nests in India have been discovered with fossilized snakes coiled atop them.

Unlike their cousins, theropod dinosaurs, from which birds are descended, do appear to have exhibited parental care in many cases. Theropod fossils represent both extremes in the size of known dinosaur eggs, with some from Thailand as small as those of a modern-day goldfinch and others from China topping out at two feet long. These eggs, which possess smaller pores, appear to have only been partially buried in soil, suggesting that they were actively incubated.

Tantalizingly, it appears to be this transition to greater exposure that led to the evolution of colored eggs, a trait that persists in many birds today. Greater exposure meant the need for camouflage. Buried eggs, both in dinosaurs and modern reptiles, are always white. The arrangement of the eggs, too, is an indication that the nest was managed by a parent. While some primitive theropod nests exhibit the scattered egg formation more typical of ornithischians, others, notably oviraptorids and troodontids, produced nests in which the eggs are arranged in a circular patterns, a sign that an adult sat in the middle and kept them warm. In fact, several fossils have been found that preserve the parent in situ, likely after it was buried in a flood or landslide. This is the origin of the name “oviraptor” which means “egg thief” in Latin; when first discovered, the adult on the nest was believed to be a predator rather than a parent.

Because these parents did not move in time to avoid whatever catastrophe buried them, it has been hypothesized that, like the modern day emu, the father brooded the eggs in a lethargic state, eating and drinking little until his charges emerged. The paternal care theory is further supported by the large clutch sizes in such nests, which may have been the result of a polygamous mating system in which multiple females laid their eggs in the same nest.

A fossil of another theropod species, Sinosauropteryx, was found with two eggs inside of it, demonstrating that some theropods retained two oviducts, as compared to the one in the birds of today. This fact, in conjunction with the asymmetrical shape of the egg, shows that they produced two eggs at a time, rather than in rapid succession, like crocodiles and likely more-primitive dinosaurs. Thus, an entire clutch might take a week or more to lay, as is the case for modern avians who produce large clutches.

And so the continuum between our modern dinosaurs and their fossilized ancestors is reinforced, an ever-denser mosaic of bones, feathers, and eggshells.