The secret ingredient that turns honeybees into queen bees • Earth.com 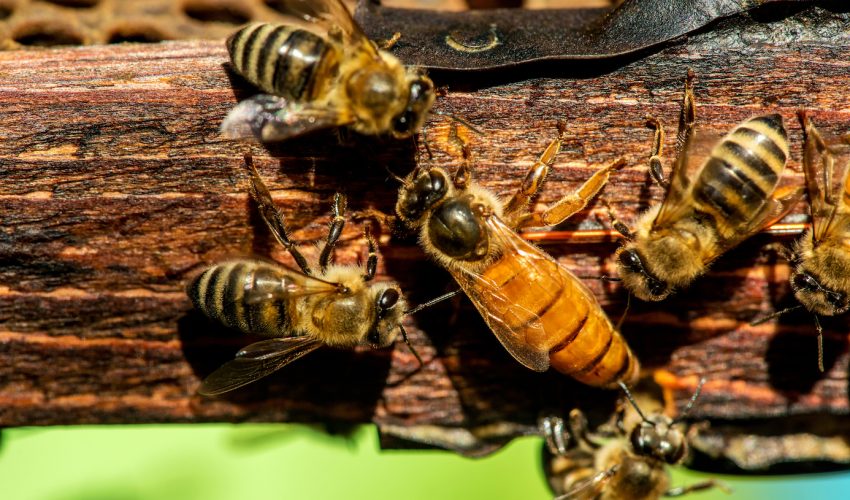 The secret ingredient that turns honeybees into queen bees

What separates a queen bee from a regular honeybee? Besides the metaphorical crown, queen bees are separated from the average worker bee when they are fed large quantities of a food known as royal jelly when they are larvae. Other than determining whether a larva becomes a queen, the royal jelly also keeps it safely anchored to the roof of the queen cell – the structure in which the bee develops. New research published in Current Biology explains the role that the pH of royal jelly plays in making the substance viscous enough to keep the future queen from falling.

“Royal jelly is kind of viscous and sticky and jelly-like; that’s why it’s called ‘jelly.’ It’s like a mixture of marmalade and honey,” says Anja Buttstedt, a molecular ecologist at Martin Luther University Halle-Wittenberg, and senior author of the study.

While other larvae are fed small quantities of food jelly directly, the worker bees feed it to the queen-to-be in large amounts, accumulating a sticky mass that both feeds the larva and keeps it in place. This is important, as the queen larva are too big to fit into the cells of the hive’s honeycomb, so usually the only place on the hive with enough room for the queen cells is hanging off the bottom of it. The lack of space makes the role that royal jelly plays vitally important. When Buttstedt and her team were experimenting with the proteins that make up this substance, they found that it completely changed its consistency, changing to a more liquid viscosity.

In further analysis, they looked at the royal jelly at several different pH levels. Normally, it has a pH of 4, but they found that between a pH of 4 and 5, the viscosity of the jelly changed dramatically. At a neutral pH, it became more of a runny consistency. “And then we realized that the protein that we were purifying at pH 4 was somehow much bigger in size than what we would expect from its amino acid sequence,” explains Buttstedt. “Most purification protocols use pH 7, so other people never expected or saw the huge size of the protein.”

The researchers determined that the main protein in royal jelly, MRJP1, polymerized with another protein in more acidic conditions to form a network of fibers. The fibers increased the size of this protein and actually changed the jelly’s consistency. “That was, in the end, the missing link between the pH, the viscosity change, and the protein,” says Buttstedt.

While it’s still not known how the fibers change the viscosity of royal jelly, the researchers do have a hypothesis of why this change is necessary. Royal jelly is produced in the glands of worker bees and needs to be fluid enough to travel through their glandular ducts. The jelly is produced in two separate glands; one produces the proteins in a neutral pH and the other makes fatty acids that can reduce the pH when the two secretions combine.

“The longer I think about it, the less surprising I find it,” Buttstedt says. “There are many other proteins in royal jelly, and I would like to find out what all of them are doing. Because these proteins exist in this way just in honeybees, they most likely use them to do something very special.”