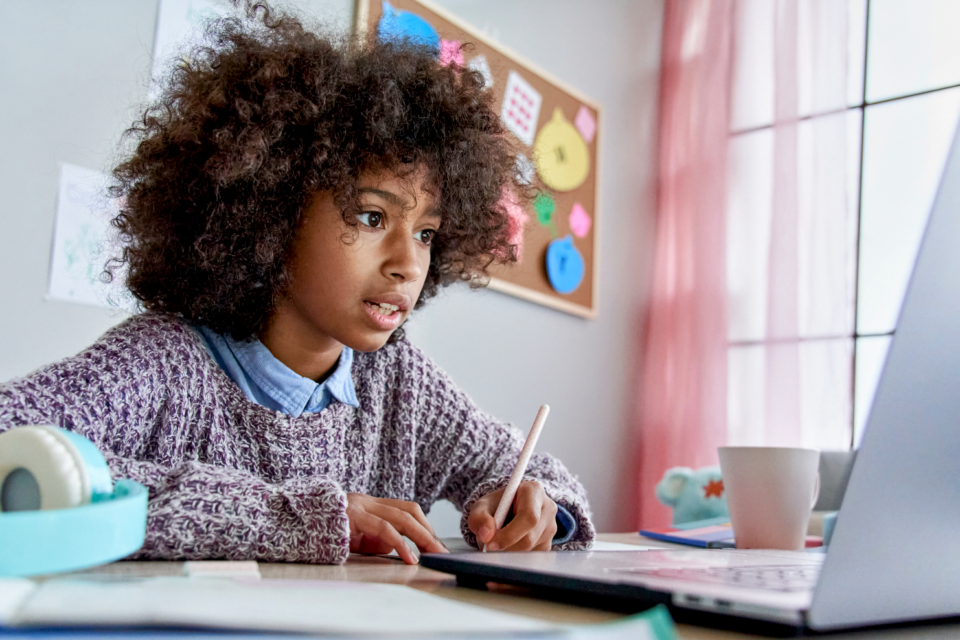 Life as we knew it immediately changed during the pandemic. Millions of children spent more than a year attending virtual school from kitchen tables, bedrooms and laptops. A new study suggests that the shift to remote learning may have led to negative consequences for younger kids. Elementary school-aged children enrolled in remote learning experienced greater behavioral, learning, and sleep-related difficulties.

The researchers surveyed roughly 300 parents with children ranging from kindergarteners to fifth graders between February and March 2021. Study lead author Dr. Kimberley Levitt is a developmental behavioral pediatrician at University of Michigan Health C.S. Mott Children’s Hospital and a researcher at Michigan Medicine.

“In the early days of learning about how the virus spread and who was at risk, everyone made the best decisions they could with the information they had,” said Dr. Levitt. “We wanted to explore differences in parent and child well-being at a time when some school districts had returned to in-person school, while others remained remote or hybrid.”

In the United States, more than 55 million students were impacted by a change in school formats during the spring of 2020, many of which were fully remote that year.

The study is one of few that have examined family well being, compared several areas of health, including behavior problems, school experiences, sleep challenges, potential disparities, and parent stress.

Children in remote schools showed more signs of hyperactivity and problems amongst peers. This is likely a result of fast-changing demands and expectations, adjusting to interactions through screens, and being home with fewer outlets.

“There’s a certain amount of comfort and safety in knowing what to expect and having routines to fall back on. In general, any sudden changes to routines can trigger stress and emotional dysregulation in kids.” said Dr. Levitt.

Virtual school attendees were less likely to be academically motivated or socially engaged and more likely to show defiance and resistance in doing schoolwork.

“Remote learners appeared to be less excited about learning,” said Dr. Levitt. “We know that children’s enthusiasm and engagement in school helps predict how they cope with academic challenges throughout the year.”

Parents of remote learners were less likely to report that the teacher knew their child well, the child knew their classmates well, was motivated to get ready for school in the morning, has enough opportunities to socialize, or has a best friend.

During this time, loss went beyond academics, such as a sense of community, identity and independence, as well as the development of key friendships.

Children were falling asleep later and were more likely to co-sleep with parents. A third of parents said their child took longer to fall asleep, about a seventh reported more overnight awakenings, and more than a fifth said their child had more nightmares.

This is likely due to greater anxiety and stress, increased screen time and exposure to increased family conflicts.

“Providers should consider tailoring interventions for families who would benefit from a sleep hygiene reset. We know disrupted and poor sleep can affect all areas of health, including mood, behavior and both physical and developmental growth as well as academic performance.”

Researchers considered how families with hardships and stressors, such as food or housing insecurity, may have experienced a greater burden of stress.

Nearly a third of families surveyed were from underrepresented racial or ethnic minorities. Underrepresented minority children were more likely to attend a virtual school than non-Hispanic white children.

Surprisingly, the study found that associations between remote learning and behavior difficulties were more challenging for children without material hardships.

“Children with material hardships showed more behavior challenges overall, but less associated with school format. Parents may not have detected a noticeable difference in the home setting during remote learning, but we need further studies to understand how to better support these families,” said Dr. Levitt.

More than two fifths of parents overall reported elevated depressive symptoms. The researchers suggest that providers may consider screening parents for mental health concerns and material hardships to identify those who could benefit from mental health resources and social work assistance.

“Many parents in our sample reported material hardships, such as poverty, job loss, and food insecurity and reported more parent-child conflict. We heard this from families we treat at Michigan Medicine, but our survey showed that the experience was widespread throughout Michigan,” said study senior author Dr. Jenny Radesky. “This school year, we hoped that things would improve with consistent in-person learning and increased educational funding.”

Sadly, some children are still struggling with behavioral challenges. Some schools are also struggling to hire social support staff. However, the researchers are hopeful that their findings demonstrate the importance of schools to receive the resources they need to help children heal from these pandemic impacts.