In reptiles, gender can be determined in some unusual ways • Earth.com 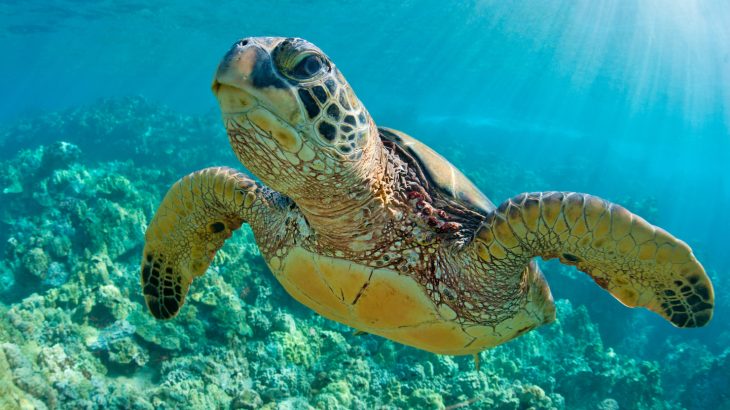 In reptiles, gender can be determined in some unusual ways

For humans, it may seem obvious that gender is controlled by genetics.  For other animals, it’s not always the case. Research shows that in sea turtles and crocodilians, males and females are genetically identical.  Instead of a difference in chromosomes in boys and girls, the temperature at which eggs develop are involved in determining the gender of these young reptiles.

I volunteered for five months on Equatorial Guinea collecting sea turtle nest data.  One of the data points we collected was the temperature of different nests. Nests laid on the same beach at roughly the same time can vary.  Sea turtles often seem to have different ideas of how far in to nest. Most turtles would haul themselves tediously over the beach right to the edge of the forest, but a few went only half that distance.  It’s easy to see how a nest partially shaded by palm trees would be cooler than one buried in sand directly under the blazing sun.

According to the National Ocean Service, in most species of sea turtle, eggs that incubate below 81.86 °F (~27.7°C) will hatch male turtles, while eggs incubated above 87.8 F (~31°C) will hatch female turtles.  Those nests that fluctuate somewhere between these outside temperatures will hatch a mix of male and female turtles. Crocodilians (alligators, caimans, crocodiles and gharials) have similar sex determination.

According to a study in Nature, the American Alligator (Alligator mississippiensis) has eggs that develop baby alligators with different genders depending on the temperature.  Alligator eggs incubated during the critical period at 33 °C (~91.4°F) give rise to male offspring.  Eggs incubated below 30 °C (~80°F) give rise to female alligators. Interestingly, there’s a large amount of diversity among reptiles on how sex is determined.

Black Marsh Turtles (Siebenrockiella crassicollis) are mostly dark but with whitish markings along the borders of their shells and a white pattern on their faces.  The black marsh turtle is native to Southeast Asia where it lives in slow moving water with abundant plants, eating snails, tadpoles, almost any small animal.  The Black Marsh Turtle is also the first turtle to be discovered with X and Y chromosomes.

Some other reptiles like the Green Iguana (Iguana iguana) have regular X and Y chromosomes like humans do to determine gender, according to Scientific American.  Others as we’ve seen have no genetic differences between males and females at all.  Instead, gene expression is changed by temperature, turning female or male gene expression ‘on’ or ‘off’ depending.  The expression of genes is an interesting phenomena, as there are parts of any individual organism’s genome that aren’t expressed at any given time.  Sometimes partial expression of different genes combine to create a sort of hybrid gene expression. Sometimes environmentally controlled gene expression can be more important than non-environmentally expressed genes.

In some lizards, sex is determined not just by a chromosome and not just by temperature but instead a combination of the two.  Australian skinks (Bassiana duperreyi) are one of the strange reptiles that falls somewhere in the middle between fully dependent on temperature for gender determination and those where sex chromosomes determine gender.

It turns out that the amount of yolk in an egg plays some role in the sex determination of Australian skinks. Researchers noticed that larger eggs were more likely to develop into female lizards, so they took some pregnant skinks back to the lab.  Under a controlled setting, the eggs were slightly modified. Some eggs had an injection of egg yolk, making them larger. Some eggs had yolk removed until they were as light as the smallest eggs found naturally.  The eggs were then incubated to see how they’d develop.

It turned out that the amount of yolk in an egg could determine gender in the Australian skinks.  The eggs with less yolk were less likely to survive the process, while those with more yolk were generally successful.  Still, the study showed undeniably that more yolk meant a much greater probability that the lizard would develop into a female while less yolk meant a much greater chance of a male lizard hatching.

There are still plenty of studies to be done on gender determination in reptiles and who knows what we’ll find.  In the debate over nature versus nurture, it’s clear that genes are important. It’s also clear that in some organisms, environment can make determinations on things as fundamental as gender.  Some lizard mothers have a lot of control over their offspring, controlling which sperm they use to fertilize their eggs.

We may think of lizards and other reptiles as ‘simple’ or ‘primitive’ life forms, but reproduction and gene expression is one of the many pieces of complex life histories in reptiles.