Plants and power: The importance of rubber and sugar • Earth.com 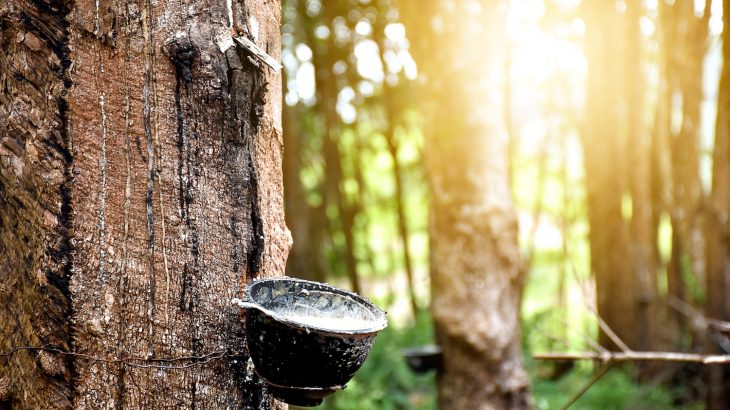 Plants and power: The importance of rubber and sugar

When we think of important resources, especially natural resources, we usually think of things like oil and natural gas. Less likely to garner as much attention are plants like sugar beets or the rubber tree but these indeed are resources, agricultural and natural.

These resources are important ones too.  Imagine a world without rubber. No tires, no rubber bands.  What would we use to make gaskets or hair bands? Imagine likewise a diet without sugar.  No soda, no desert. No sweet and sour pork. Both rubber trees and sugar whether from cane or beets make up important parts of modern life.  Latex rubber especially ties us to the tropical regions of the world.

In his book One River, Wade Davis discusses the importance of latex, especially around the time of World War II.  Rubber was absolutely essential to the Allies’ war effort. Rubber made up tires on trucks and planes.

Rubber is more important than commonly thought to everyday life as well as war.  Consider that the US created 270 million tons of rubber waste from tires in 2011.  Rain gear, insulation for wires and the soles of boots all use rubber.  One River explores the omnipresence in rubber on vehicles used during World War II:

“Each one of the battleships sunk at Pearl had more than twenty thousand rubber parts, more than one hundred sixty thousand pounds all told.  Every hose on every ship, every valve and seal, every tire on every truck and plane we ship to the Russians…”

The rubber tree (Hevea brasiliensis) has a unique natural history, making it difficult to grow in plantations.  The Olmec used rubber to make things like balls as long as 3,600 years ago, but it was the discovery of vulcanization, a process which makes rubber more durable, that kicked off a rubber boom in South America.

The rubber tree is native only to the tropics of the Americas and succumbs to blight if too many trees are grown in close proximity of each other in Latin America.  This quirk dictated the realities of much of the early rubber industry. Rubber tappers took to the rainforest, hiking trails to each tree in succession to tap several in turn.  Because the trees were spaced far apart in the forest, long hours were required to obtain raw latex.

Labor costs cut into the profit margins of rubber businesses and many of the so called ‘rubber barons’ turned to the natives for slave labor, creating a hell that left scars to this day on the cultural landscape of South America.  Places like Manaus Brazil and Iquitos Peru became extravagantly wealthy with many luxuries contrasting their place as remote jungle towns. Soon, agents of the British empire illegally smuggled rubber tree seeds out of South America and plantations were started in British India, breaking South America’s rubber monopoly.

For a time rubber plantations in Asia out-competed wild rubber tapping in South America and the rubber businesses died, leaving behind the ghosts of their horrible practice.  With the start of World War II, Japan made rubber supplies from Asia increasingly unreliable to the Allies. Rubber was once again taken from South America for a short time. The US started experimental rubber plantations in Costa Rica with blight resistant tree stock.  Eventually the plantations were shut down largely due to political bickering.

Today, the vast majority of the world’s rubber still comes from southeast Asia.  The top four rubber producing countries in the world are Thailand, Indonesia, China and India.  Rubber is not the only plant to play an important role in international relationships and war, though.  Sugar is more important than it first seems as well.

Until relatively recently, Cuba dominated the international sugar industry.  According to Britannica, by 1850, sugar made up four-fifths of Cuba’s global exports, and in 1860 the island produced almost one third of the world’s sugar.  As with the rubber trade in South America and the cotton plantations of the US south, sugar in Cuba fueled the slave trade and huge amounts of inequality among Cubans.  Cuba’s economy also became increasingly dependent upon sugar and tied to its global market.

In his book, Open Veins of Latin America, Eduardo Galeano tells how the US utilized the weakness of Cuba and its dependence on one crop for wealth.  In 1921, the price of sugar dropped radically from $.22 per pound to $.04 a pound. The drop in prices was a tragedy for Cuba but the US came to their aid with credit of $50 million, though the economy of Cuba has never quite recovered.

The place of the US in Cuba was cemented for a time with this loan but interference stretched back to the US involvement in Cuba’s fight for independence and the following US military occupation of the newly independent Cuba.  In essence, the sugar industry of Cuba was created to fuel Spain and by being allied with the US, Cuba became entrapped in a sort of dependence on the US, a nation addicted to sugar. Galeano goes on to note that by 1948, Cuba supplied one third of the US’ sugar but received much lower prices than US sugar growers.  Sugar grown outside the tropics was only possible through new technology.

The development of another type of sugar has allowed the United States (and other countries) to dictate the terms of trade with Cuba, leaving the island nation mired in poverty.  Traditionally sugar comes from sugar cane, a large grass in the genus Saccharum; a treat that many who’ve visited the tropics may have bought on the street to munch raw and sticky making the eater look like a panda with bamboo.  In 2009, sugar from beets accounted for 20% of the world’s sugar, with United States, Europe and Turkey being the top global producers of sugar, according to Wikipedia.  In 1747, Andreas Marggraf, a German chemist demonstrated that sugar could be extracted from beets, a discovery coming after sugar cane plantations were already established in Cuba.

Beets and US sugar cane allowed the US to treat Cuba as their plantation colony and then cast them off when they became politically hard to deal with.  The wealth produced by sugar growers in Cuba also ended up in US pockets often enough. Open Veins of Latin America reports that at one point, 13 US sugar producers owned as much as 47% of the land planted with Cuban sugar cane.  Plantations of rubber in Asia allowed Europe and North America to accumulate their own wealth at the cost of rubber barons in South America.

The story is the same as with any resource, controlling the resource means gathering the wealth.  The chemistry of sugar from beets, the clandestine planting of rubber trees in Asia and the eventual invention of synthetic rubber are all tied to the wealth of nations.  There’s talk about wealth from oil and the empires built on it but plants can be the basis of wealth just as easily.