The salamanders that found a form of eternal youth are now in danger • Earth.com 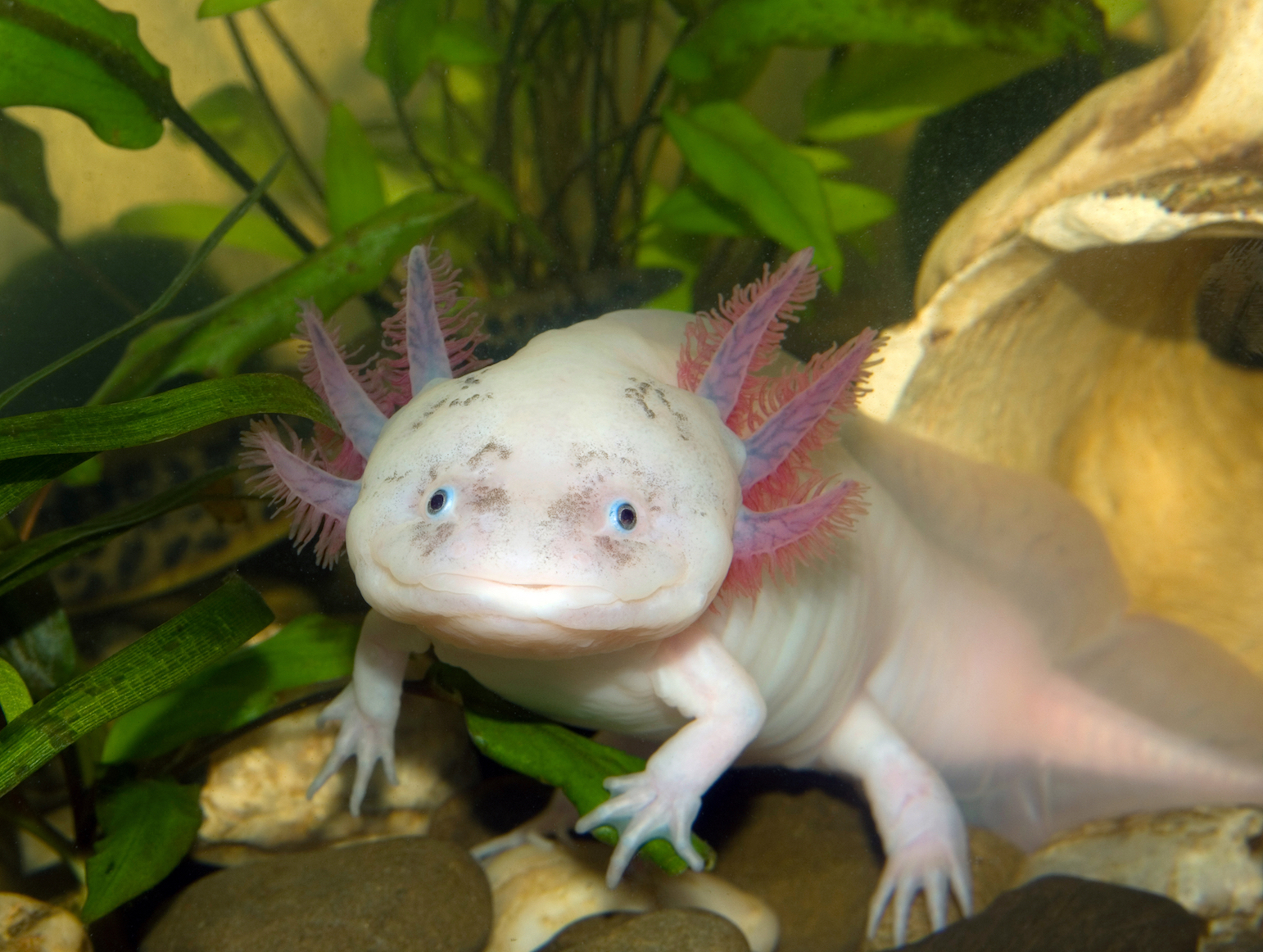 In the murky backwater channels and ponds of Mexico City’s Xochimilco district, which are all that remain of what was once Lake Xochimilco, lurk a handful of aquatic Peter Pans. These creatures have, through a series of arcane evolutionary twists, found a form of eternal youth. Or something approaching it.

This remnant population of axolotls (Abystoma mexicana), you see, doesn’t grow up like other salamanders. They remain in a semi-larval stage throughout their lives, though they are fully capable of reproducing. They are forever tadpoles—or, more accurately, efts, the larval stage of the salamander. In addition to retaining their gills and caudal fins, they only have rudimentary teeth and lack eyelids. They are closely related to tiger salamanders (the 32 species of the genus Amphystoma), most of which do metamorphose in the usual way, growing from fully aquatic larvae to amphibious adults, capable of life on land and in the water. However, due to a unique confluence of factors, axolotls have found that remaining in the larval form has conferred some unique evolutionary advantages. 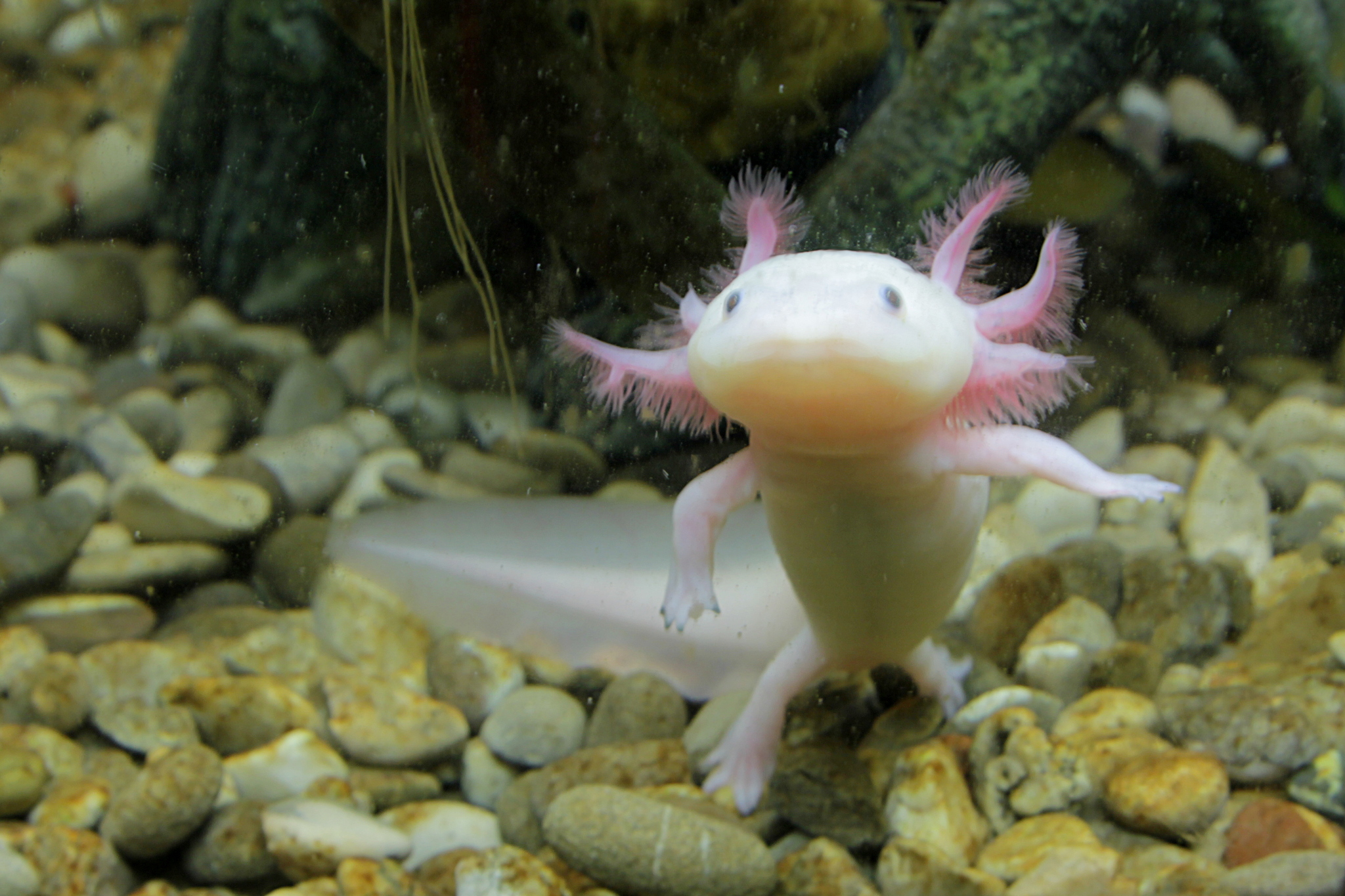 When Mexico City—then Tenochtitlan—was first expanded to include Lake Xochimilco in the mid-1400s, these waters were teeming with axolotls. The anomalous amphibians worked their way into the mythology of the Aztec settlers, coming to symbolize one incarnation of Xolotl, the twin brother of the god Queztalcoatl. Xolotl was the god of death and lightning, and according to Aztec legend transformed himself into an axolotl to avoid capture. Because he was often depicted in canine form, in this state he was referred to as a “water dog”—axolotl, in the Aztec language. Alternatively, because of Xolotl’s monstrous qualities, this has been translated as “water monster.” The later Spanish colonizers heard this as ajolote. 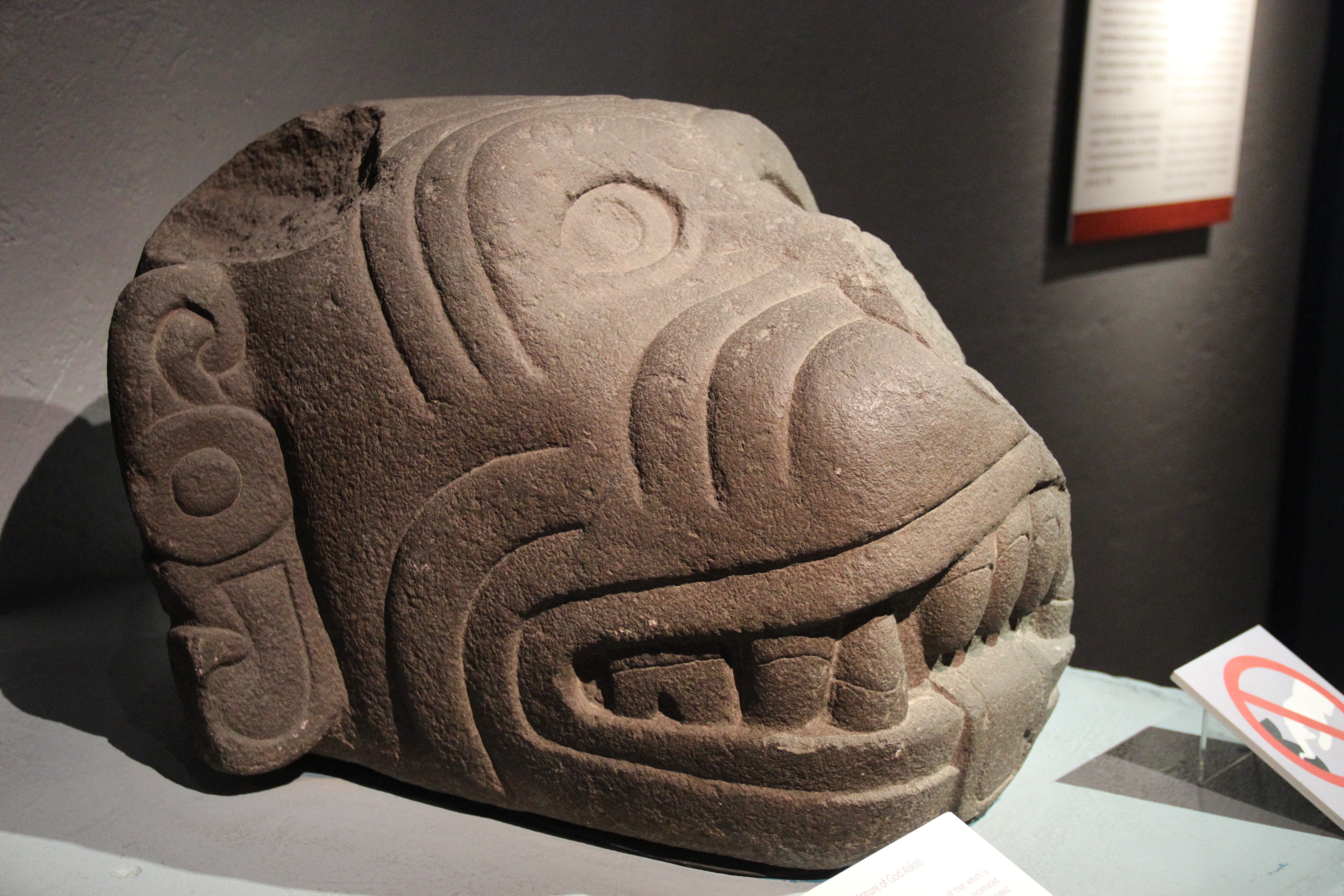 Sculpture of the Aztec god Xolotl

The Aztecs both venerated and devoured these water dogs. They can still be found on occasion in Mexico City markets. However, tilapia and carp introduced to their home waters by the Food and Agricultural Organization of the United Nations in the 1970s and 80s has made this an ever-rarer occurrence. These fish, intended to add more protein to the diets of low-income residents, are all too happy to slurp up axolotl eggs and larvae.

A flourishing population of axolotls persists in captivity though, both as research subjects and as pets. The species was first brought to the attention of Europeans in 1804 when scientist Alexander von Humboldt shipped some preserved specimens back to Paris, where anatomist Georges Cuvier erroneously concluded that they were larval reptiles. Axolotls came to wider recognition in 1864. That year, a French army officer sent 34 live specimens to the Societe imperiale zoologique d’acclimatation in Paris. Six of these remarkable amphibians were given to Auguste-Henri-André Duméril of the Museum d’Histoire naturelle. It was Duméril who first began to fully appreciate the strangeness of the axolotl. For one, five months after he received his batch, they laid eggs, thus puncturing the notion that they were immature. And then, remarkably, seven months after that, some of the adults metamorphosed. Absorbing their external gills and losing their caudal fins, they became something that more closely resembled a tiger salamander and required a terrestrial habitat to survive.

From Duméril’s original colony, the species spread across Europe and Russia through a process of donation and exchange between museums, zoos, and individual collectors. Axolotls, in fact, comprise the oldest continuous population of research animals, though initially they were mostly seen as curiosities and pets. They are quite long-lived in captivity, with specimens regularly living and reproducing into their teens, and one individual reportedly living into its 30s. Strangely, those that metamorphose live much shorter lifespans—perhaps five years.

The inducement to metamorphosis became the focus of study; these studies have in fact informed our understanding of how the axolotl and other metamorphic creatures undergo their amazing transformations. In 1876, researcher Marie von Chauvin successfully forced her axolotls to metamorphose by slowly lowering the water levels in their tanks. Later, other research subjects transformed when fed thyroid tissue from cats and horses. This discovery led to the conclusion that thyroid hormones are involved in the metamorphic process. We now know that metamorphosis is induced by changes in thyroid hormone levels and sensitivity.

When an animal is ready to metamorphose, levels of thyroid releasing factor (TRF) manufactured by the hypothalamus increase and stimulate the pituitary gland to produce thyroid stimulating hormone (TRH). Levels of prolactin, a substance produced by the pituitary that inhibits the action of thyroid hormones, begin to fall, and the thyroid begins producing thyroxine. This catalyzes the tissue changes that ultimately lead to an entirely different physiology—one that allows the once aquatic animal to lose its larval characteristics, including its gills, and breathe air. The injection of iodine, used in thyroid hormone production, or of purified thyroxine, were also found to force metamorphosis in axolotls.

In the wild, this never happens to axolotls. They all remain in their semi-larval state. This phenomenon is a form of pedomorphosis. Pedomorphosis is a form of heterochrony, or changes in ontogeny—the developmental processes that occur over the lifespan of an organism. While popularly referred to as neoteny, a form of pedomorphosis seen in such animals as small dogs, who retain juvenile features such as flattened faces into adulthood, the form of pedomorphosis seen in axolotls is more accurately referred to as progenesis. That is, its reproductive features develop while it still retains most of its larval morphology. (The lexicon used to describe these phenomena is the subject of much debate and scientists sometimes use the above mentioned terminology differently.)

Interestingly, some related species do metamorphose. Some do so predictably, like any other amphibian. Others do so in some populations and not in others. In these species, whether or not it metamorphoses appears to be environmentally dependent. This is known as facultative pedomorphosis. This is true of some members of most families of salamander. In areas where water levels remain seasonally constant and are cold, often at high elevations, if terrestrial prey is scarce, and/or if predatory fish are absent, populations may persist in pedomorphic states. This is thought to be an adaptive advantage—if life is easier in a pedomorphic state, why not stay that way? 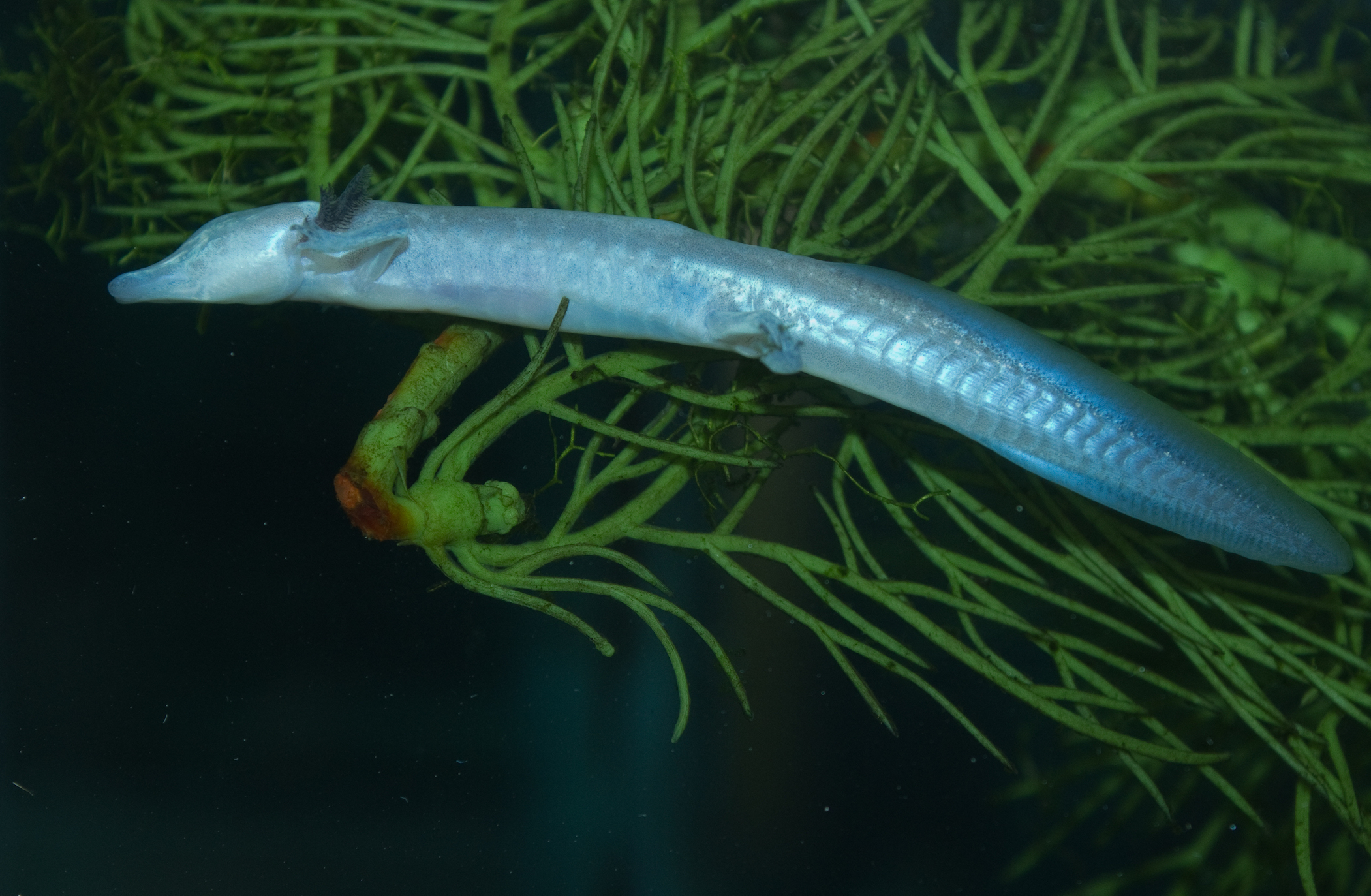 These salamanders can, nonetheless, interbreed with metamorphic polymorphs of the same species. And if conditions change or are artificially altered, the can usually metamorphose. In one intriguing case, a concrete reservoir at an abandoned military base in Wisconsin served as the breeding ground for a rarely found population of pedomorphic eastern tiger salamanders (Ambystoma tigrinum). They are thought to have become pedomorphic due to the water level in the reservoir—the concrete lip only allows salamanders to enter, not leave, so only the pedomorphic offspring of salamanders that laid eggs in the water could survive. Populations from surrounding areas are thought to metamorphose because they are restricted to seasonal pools and thus cannot survive as pedomorphs. Permanent bodies of water in the area contain fish and so are not conducive to salamander survival. High-altitudelakes in Europe have similarly given rise to populations of pedomorphic alpine newts (Ichthyosaura alpestris).

In four families of salamander—Sirenidae, Amphiumidae, Proteidae, and Cryptobranchidae—pedomorphosis is obligate. This is true of species from other families as well. The axolotl, a member of the Ambystomatidae, is technically an obligate pedomorph—it never metamorphoses in the wild, likely an adaptation to the lack of terrestrial food in its high-altitude habitat. Some members of the genus Eurycea of the family Plethodontidae, inhabit caves and in addition to being pedomorphic are blind and white. Unlike the axolotl, these salamanders cannot be induced to metamorphose even artificially. Their cells appear to be impervious to the effects of thyroid hormone. The white coloration of some pedomorphic salamanders may be tied to their altered pituitary function, which affects the production of melanin. Leucistic axolotls are common, especially in captivity, and leucism appears with some frequency in pedomorphic populations of other species. 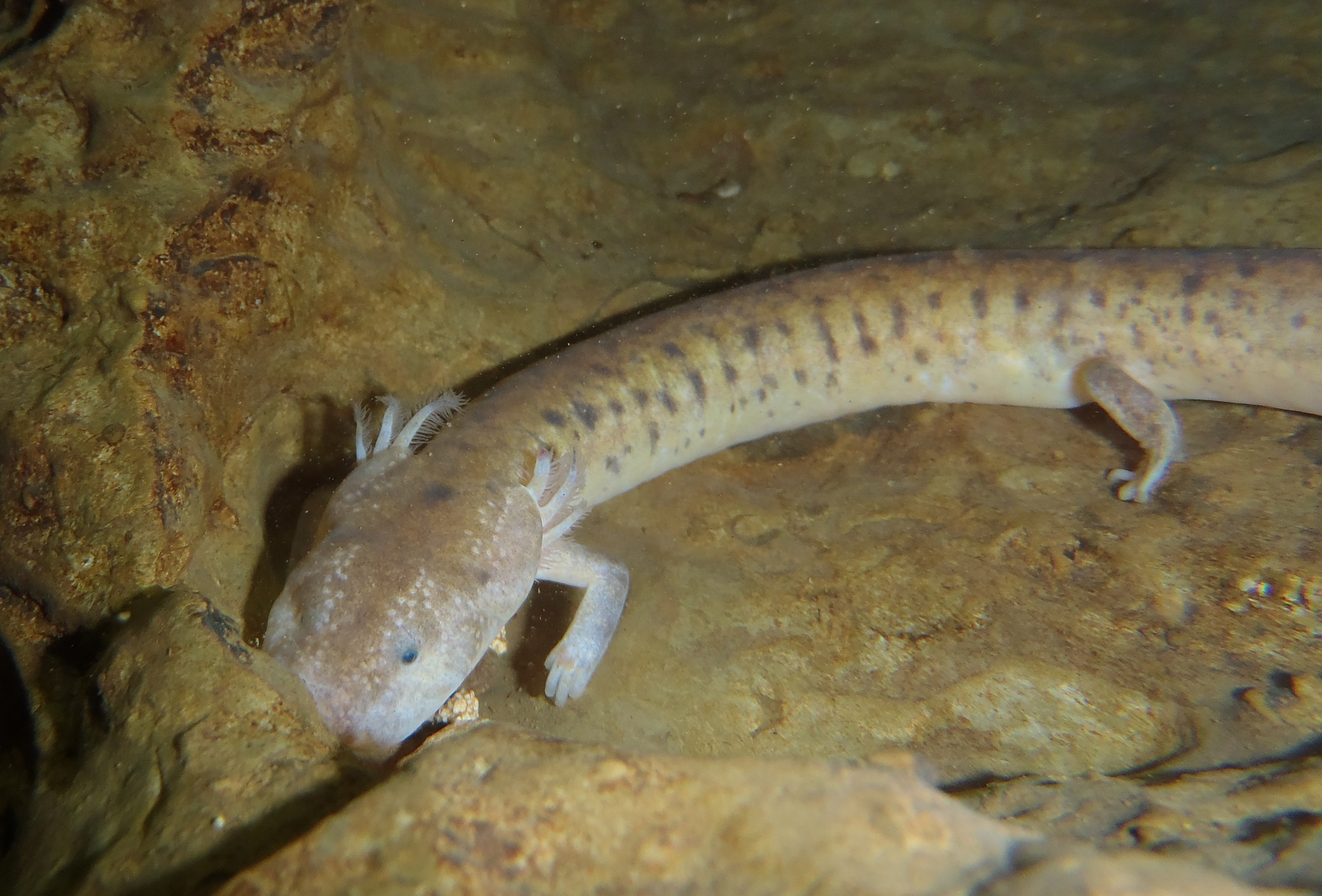 Axolotls remain the subject of much fascinating research in the lab. Their regenerative capabilities, shared to some degree by most amphibians, are unparalleled. They can regenerate limbs, tails, spinal cord tissue, and large portions of their hearts, all without scarring and with the return of perfect function to the injured area. Organs transplanted from one axolotl to another suffer no rejection. Heads have even been grafted onto their backs with some success. The species has thus been the focus of regenerative medical research. In 2018, the axolotl genome was finally sequenced, the largest to date. It is some ten times bigger than the human genome.

Yet, for all of the thousands of axolotls in captivity and for all of their contributions to scientific knowledge, they are on the brink of extinction in the wild. The IUCN classified them as critically endangered in 2006. In addition to the fish now prowling their redoubts, sewage overflow due to Mexico City’s deteriorating and outdated infrastructure threatens water quality. One project aims to remedy this by encouraging an ancient farming practice. Chinampas are floating gardens made of dredged up sediment and plant matter. These gardens are part of the UNESCO World Heritage site known as the Historic Centre of Mexico City and Xochimilco. The program’s organizers hope that by encouraging farmers to maintain these gardens and in doing so monitor water quality, they can preserve habitat for the remaining water dogs.

While to die, as Peter Pan’s creator J.M. Barrie wrote, would be an awfully big adventure, it’s a fate that the world would do well to help the axolotl avoid.