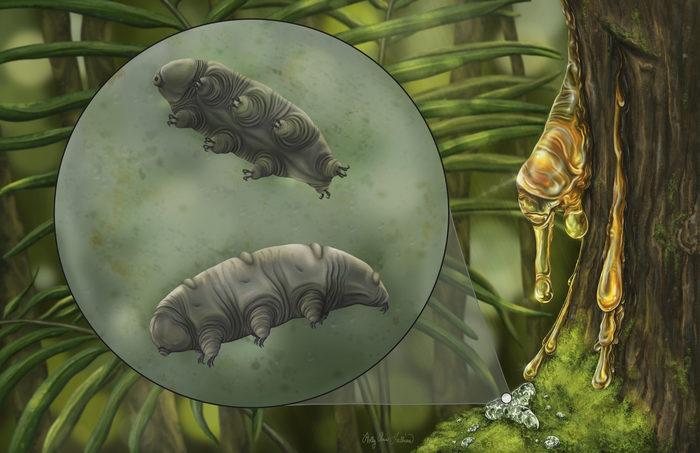 Tardigrades, also known as water bears or moss piglets, are a phylum of eight-legged segmented micro-animals that are approximately 0.02 inches in length. They are some of the sturdiest animals on the planet, being able to survive in a variety of extreme conditions.

For instance, in a 2007 trip to space, some tardigrades were exposed to the space vacuum and to damaging solar radiation, and still managed to survive and reproduce after returning to Earth.

Although tardigrades have survived all the five Phanerozoic Great Mass Extinctions and are found on all the continents and in various marine, freshwater, and terrestrial environments, the earliest modern looking tardigrades are only known from approximately 80 million years ago.

Due to their microscopic size and non-biomineralizing bodies, the tardigrade fossil record is extremely sparse. Thus, the newly found tardigrade fossil is only the third to be fully described and formally named until now.

This fossil was found embedded in Miocene Dominican amber from 16 million years ago. It is the first fossilized representative of the tardigrade superfamily Isohypsibioidea.

Because of its extremely small size, researchers needed a special microscope to observe it in detail. By using confocal laser microscopy, they managed to fully visualize the fossil’s internal morphology and found significant differences from contemporary tardigrades.

“Even though externally it looked like a modern tardigrade, with confocal laser microscopy we could see it had this unique foregut organization that warranted for us to erect a new genus within this extant group of tardigrade superfamilies,” said study lead author Marc A. Mapalo, a PhD candidate in the Department of Organismic and Evolutionary Biology at Harvard. “Paradoryphoribius is the only genus that has this specific unique character arrangement in the superfamily Isohypsibioidea.”

“This helps us understand what changes in the body occurred across millions of years. Furthermore, this suggests that even if tardigrades may be the same externally, some changes are occurring internally,” Mapalo concluded.