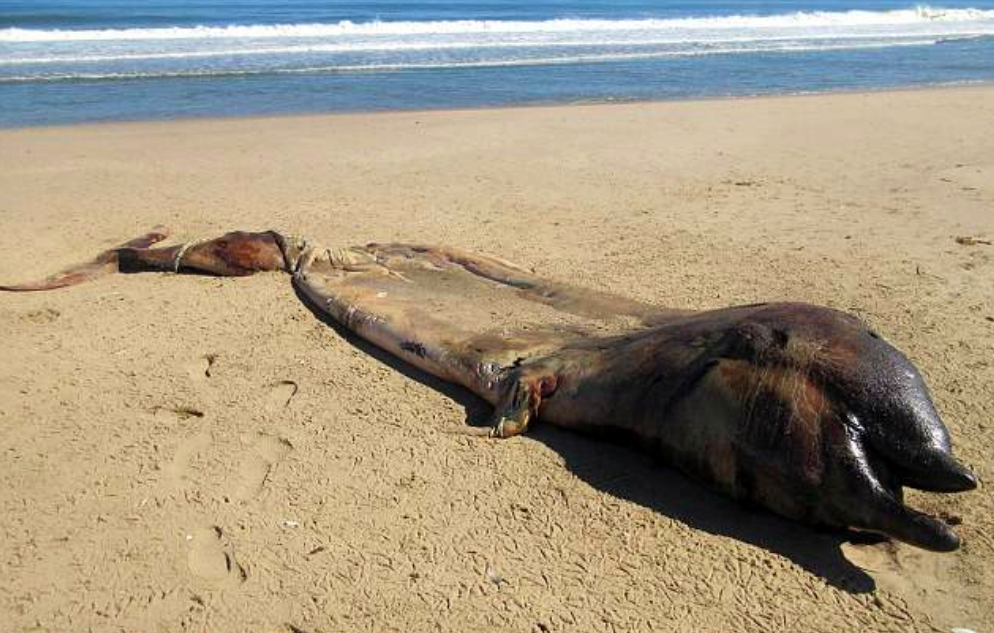 A rotting carcass recently discovered on the coastline of Dorob National Park in Namibia at first had scientists puzzled. It was not clear what species the animal belonged to due to the badly decomposed state of the body.

However, it is now believed to be the remains of a Cuvier’s beaked whale.

Cuvier’s are one of the most commonly spotted beaked whales and there are thought to be over 100,000 Cuvier’s in the ocean.

The whales are known for their deep dives and they can swim down to depths of 9,816 feet, the deepest dive of any mammal on Earth.

Cuvier’s have a long torpedo-like body with a head that curves into a short beak.

The carcass was in such bad shape that scientists, besides at first being unable to identify it, are also not able to determine any cause of death. Samples of the whale have been collected and will be analyzed for further research.

“The body of this animal was in an advanced state of decomposition – making it look rather un-whale like and there were several confused reports on social media,” Simon Elwen, a researcher from the Namibian Dolphin Project (NDP) told the Daily Mail. “However, based on the shape of the head and snout and the overall size – research team are fairly confident that the specimen is a Cuvier’s beaked whale.”

Despite their large numbers and widespread distribution, the whales are rarely seen except at lower depths, so having one wash ashore just added to its mystery.

“I was quite surprised. These animals are rarely seen in the water, so to see them on land is very unique,” Elwen told the Daily Mail.