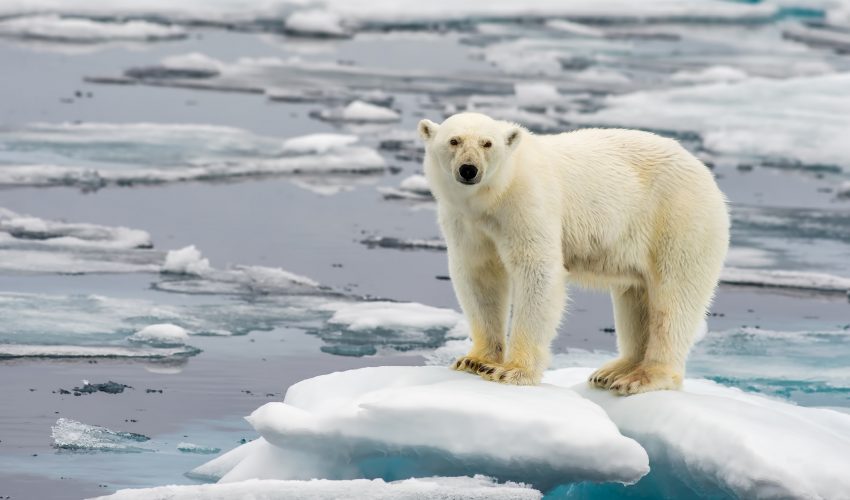 Thousands of square miles of sea ice melted prematurely off the coast of Alaska this year due to an unseasonably warm Arctic winter. A new study led by the U.S. Geological Survey and the University of Wyoming explored the challenges that the thinning, faster-moving ice is creating for polar bears.

Researchers have previously documented a decline in abundance, health, and reproduction of polar bears. A new study, published in Global Change Biology, provides an unprecedented account of the effect that accelerated sea ice drift has on polar bears.

Rapidly-moving sea ice is creating a need for the bears to access more food so that they have more energy to navigate treacherous terrain. At the same time, hunting opportunities are becoming more limited.

Dr. George Durner is a research ecologist with the U.S. Geological Survey and lead author of the report.

Dr. Durner compared the shifting ice to a treadmill picking up speed with the wind and ocean currents. The findings of the study revealed that polar bears will have to consume 1-3 more seals per year to compensate for the extra energy expelled as they make their way across the faster-moving ice. To make matters worse, the thinning ice becomes less and less suitable for hunting seals and the polar bears must walk further.

“Increased sea ice drift rates likely exacerbate the physiological stress due to reduced foraging opportunity already experienced by many polar bears in the warming Arctic, adding yet another ‘straw to the camel’s back’,” said Dr. Durner.

The researchers tracked adult female polar bears using radio collars in Alaska’s Chukchi Sea and Beaufort Sea. They paired this information with sea drift data from the National Snow and Ice Data Center, which was the result of complex analyses that produced ice drift values of over 77,000 bear locations.

The data had been collected over two time periods from 1987-1998 and 1999-2013. In the second time period, ice drift had sped up and sea ice was becoming more brittle and less abundant. Compared to the previous time frame, adult female bears needed significantly more calories to survive.

“For the polar bear, the Arctic is becoming a more expensive place to live in,” said Dr. Durner.

According to the U.S. polar bear recovery plan, it is unlikely the polar bears will survive if climate change is not addressed.