How some sharks emit a green glowing light • Earth.com 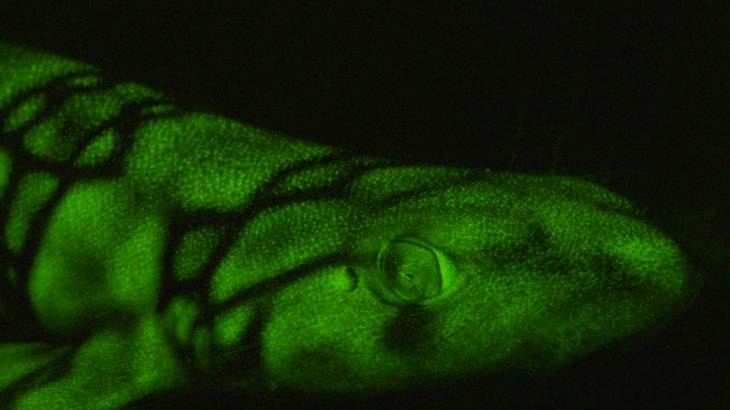 How some sharks emit a green glowing light

In the depths of the ocean, some shark species are known to use fluorescence to produce beautiful patterns of green light that only other sharks can see. For the first time, researchers have identified a previously unknown group of small-molecule metabolites which activates biofluorescence among sharks.

“Studying biofluorescence in the ocean is like a constantly evolving mystery novel, with new clues being provided as we move the research forward,” said study co-author Professor David Gruber, a marine biologist at The City University of New York.

“After we first reported that swell sharks were biofluorescent, my collaborators and I decided to dive deeper into this topic. We wanted to learn more about what their biofluorescence might mean to them.”

The study was focused on two species of sharks: the swell shark and the chain catshark. The experts discovered that the skin of these sharks contains both light tones and dark tones. The analysis of chemicals from the skin revealed a type of fluorescent molecule that is only present in the lighter skin.

“The exciting part of this study is the description of an entirely new form of marine biofluorescence from sharks – one that is based on brominated tryptophan-kynurenine small-molecule metabolites,” said Professor Gruber.

This mechanism is different from animals in the upper ocean like jellyfish and corals which commonly use green fluorescent proteins as mechanisms to transform blue light into other colors, explained Professor Gruber.

“It’s a completely different system for them to see each other that other animals cannot necessarily tap into,” added study co-author Professor Jason Crawford. “They have a completely different view of the world that they’re in because of these biofluorescent properties that their skin exhibits and that their eyes can detect. Imagine if I were bright green, but only you could see me as being bright green, but others could not.”

The molecules serve other purposes as well, such as enabling the sharks to identify each other in the ocean, and may help to protect them against microbial infections.

“It is also interesting that these biofluorescent molecules display antimicrobial properties,” said Professor Gruber. “These catsharks live on the ocean bottom, yet we don’t see any biofouling or growth, so this could help explain yet another amazing feature of shark skin.”

The research is published in the journal iScience.