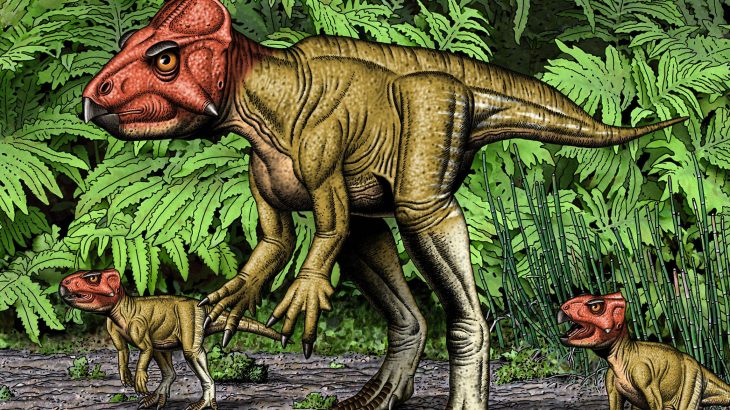 Small triceratops relative was horned and walked on two feet

A few fossils may be all that’s left of a single extinct species, and describing an entire species let alone family or genus based off of these scant remains is more common than you might realize.

When we think of new dinosaur discoveries, we sometimes imagine whole skeletons unearthed from their rocky tombs and put together like a puzzle and displayed in museums, but this is far from reality.

It’s suggested that 75 percent of known dinosaurs were described from five or fewer individual specimens. Auroraceratops rugosus, an early relative of Triceratops, is one such species.

From meager beginnings, Auroraceratops rugosus went on to be recognized as one of the most well-documented early dinosaurs to date.

It started with a single skull discovered in the Gobi Desert in 2005. But in the years since, fossils from more than 80 individuals have been found thanks to the persistent efforts of researchers and paleontologists.

In a collection of articles published in the Journal of Vertebrate Paleontology, researchers from multiple institutions compiled a detailed history of the herbivorous horned dinosaur describing the anatomy, age, evolution and how the preservation of such a robust fossil collection came to be.

Auroraceratops lived 115 million years ago, weighed around 34 pounds and stood approximately 49 inches tall. It was a horned dinosaur but not nearly to the extent of Triceratops.

“When I first saw this animal back in 2004, I knew instantly it was a new kind that had never been seen before and was very excited about it,” said paleontologist Peter Dodson, senior author of the articles, “This monograph on Auroraceratops is long-awaited.”

Dodson named the species Auroraceratops and later Dodson’s former students would go one to find 80 more Auraceratops ranging from adults to hatchlings.

As the only horned dinosaur in the group Neoceratopsia from the Early Cretaceous to be described from a complete skeleton, Auroraceratops represents an important phase in the evolution of horned dinosaurs.

The early dinosaurs were bi-pedal and walked on two legs, unlike Triceratops which was quadrupedal.

“Before this study, we had to rely on Psittacosaurus, a more distantly related and unusual ceratopsian, for our picture of what the last bipedal ceratopsian looked like,” said Eric Morschhauser, a lead author of the collaborative work. “It can now provide us with a better picture of the starting point for the changes between bipedal and quadrupedal ceratopsians.”