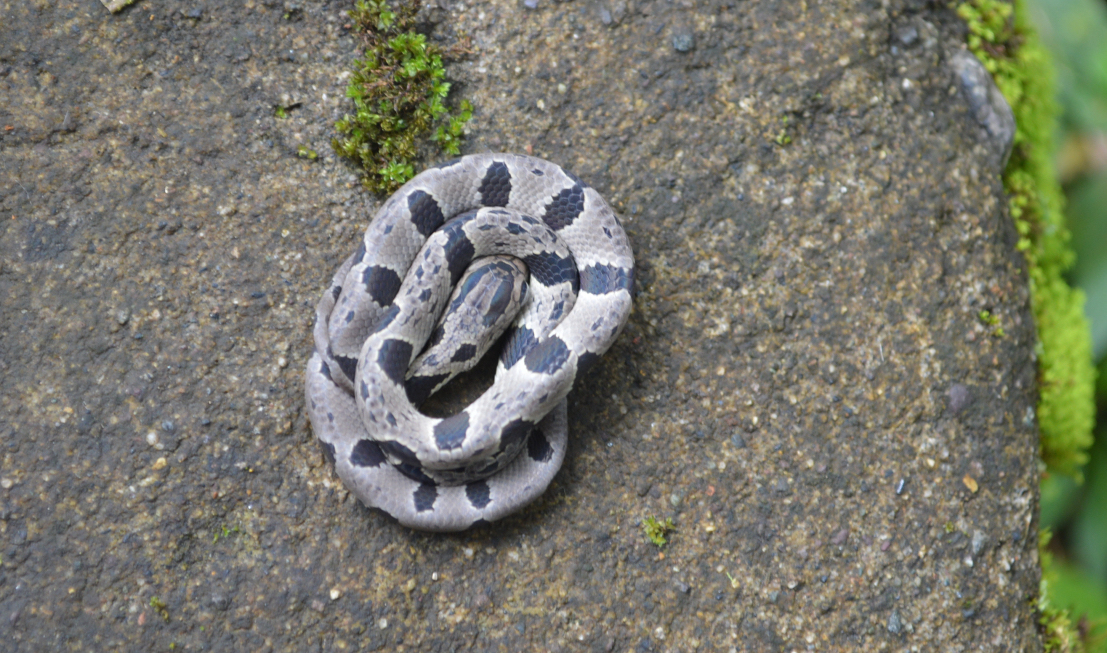 Curled into a delicate grey hoop, a small snake lay on the concrete step of the nature lodge in the Ecuadorian Cloud Forest.  Erin, my fiancé, and I were only volunteer managers of the place for three months, and the amazing biodiversity of the place often left us scratching our heads with many animal encounters.  It was nice to finally have an animal sit still while we were able to leaf through field guides and identify the snake.

On a trip by myself from the local town into the nature reserve, I was walking along the road when I encountered another snake.  The snake on the road was gracefully spread to maximize exposure to the sun.  The snake was a dazzling array of three colors, banded in red, yellow and black.  The colors were the same bright warning pattern of coral snakes.

In North America there’s a rule of thumb to distinguish between coral snakes and harmless mimics.  “Red on black, poison lack, red on yellow kills a fellow,” goes the rhyme I learned in Boy Scouts.  Red stripes on black stripes means non-venomous.  I’m still not certain the rule of thumb holds in South America like North America.  I first took a photo of the snake and pondered how to get the reptile safely off the road, where a car would almost certainly kill the snake.  I found a large branch and lifted the snake and moved it off into the vegetation on the shoulder.  The snake quickly slithered even faster away from me, with no show of violence at all.

Later, while looking at my photo of the snake with a guide book in hand, I was able to see that the brightly colored snake on the road and the snake curled on our porch were both part of the same genus, Dipsas.  The name Dipsas has a strange origin in mythology, according to a story told by Sophocles about a snake that caused enormous thirst, a donkey giving into the thirst trades the antidote for old age for water.  It doesn’t explain any connection to thirst but Dipsas snakes are a group of snakes adapted to an odd niche.

Dipsas snakes are also known as snail eaters, meaning they actually specialize in eating snails.  There are actually two groups of snail-eating snakes.  There is the old world sub-family Pareinae living in Southern Asia and the new world family Dipsadidae, which included the genus of the two snakes I saw in Ecuador and are found from Mexico to Brazil.  The two snake groups aren’t closely related, instead snail eating evolved separately in each subfamily.  There are over 700 known species in the family Dipsadidae.

Those in the genus Dipsas are the main genus in family Dipsadidae, and there are only a little over 30 species in genus Dipsas.  Snakes in genus Dipsas are rear fanged.  Dipsas tend to be slender like the small snakes I found in the cloud forest.  Also similar to the species I witnessed, many Dipsas are colored with bands of color, often alternating with white bands.

The drabber Andean Snail-Eater (Dipsas andiana) I found curled on the lodge porch also had a little horseshoe shape on its head which helped me identify the serpent to species.  The scarier brightly colored snake I saw spread across the road turned out to be a Graceful Snail-Eater (Dipsas gracilis), the bright colors undoubtedly frightened away predators but would’ve done nothing to an approaching car.

What the family Dipsadidae shares in common shows an interesting way of making a living.  Mostly snail-eating snakes are active at night, often they are arboreal, hunting their prey in trees.  Snail-eaters will follow that delicate tracery we call a snail trail, actually a residue of mucus to find snails.  When the snake finds a snail, she bites the snail close to its shell.  As the snail tries to retract into the safety of its shell, it draws the snake’s upper jaw inside as well.  The snake’s lower jaw flexes around the outside of the shell, careful not to break it.  The snake then contracts its upper mandibles, pulling in one and then the other, slowly extracting the snail from its shell to become a serpentine meal.

The weirdly specific life of the snail-eating snake, an animal that lives almost entirely on prey most humans don’t even consider tells us something.  It tells us about the evolutionary battle raging around us, how natural selection carves out sometimes tiny niches upon which a species or a family must reside.  There is also something of intricate beauty in the story of snail eating snakes, creatures living interesting, violent lives we know so very little about.  Many of the snake species are specialized not just in snails but a couple types of specific snails.  What is the world to one of these snakes or to their prey?