How snapdragons get their unique range of colors • Earth.com 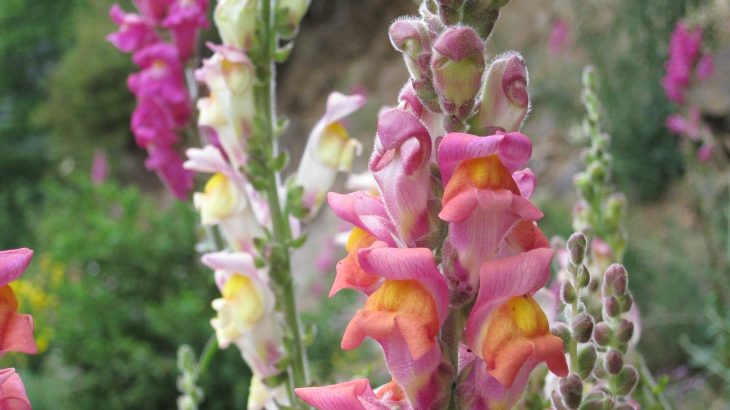 How snapdragons get their unique range of colors

You might not be able to conjure up the image of a snapdragon just by hearing the name – it’s a type of flower, by the way – but you certainly would take notice of it were you to pass it on the side of the road. Snapdragons are tall plants that flower in a bright range of colors. But the most remarkable thing about this color range is that none of them seem to mix together.

Snapdragons grow wild in Spain, and can be seen driving up a road from Barcelona to the Pyrenees. What’s most noticeable about the flowers along this road is that the snapdragons of the species Antirrhinum majus bloom in magenta at the beginning of the road, then for two kilometers they alternate between magenta and yellow flowers, and then the yellow snapdragons take over. A hybrid zone of snapdragons such as this is very rare – only a few others are known to exist. This has led researchers from the Institute of Science and Technology Austria (IST Austria) to ask the question, why don’t snapdragons mix?

The researchers from IST Austria collaborated with molecular geneticists at the John Innes Center in the UK to investigate what exactly causes this pattern. They now report in PNAS that they have identified the genes responsible for the flower color difference from DNA sequence data.

“DNA sequencing is becoming cheaper and cheaper. But analyzing sequence data and interpreting the patterns seen is very hard,” says Nick Barton of IST Austria. “In this study, we used sequence data from Antirrhinum plants to locate the individual genes which are responsible for the difference in flower color across the hybrid zone.”

For the study, they compared the genome sequence of 50 snapdragons of each color, measuring how much the sequences diverged between magenta and yellow snapdragon populations. The researchers then plotted a statistical measure of divergence between the two populations. In doing so, they found “islands” in the genome which are more divergent between yellow and magenta snapdragons than the rest of the genome. These islands correspond to genes responsible for flower color in snapdragons. The researchers focused on two of these genes, which determine the magenta pigment and are located close together on the genome.

Through observations in the field and in experiments at IST Austria, Tom Ellis – a member of Nick Barton’s lab – found that bees preferred to pollinate the most common color flowers in the population. Thus, in magenta populations, bees mostly pollinate magenta flowers, and in yellow populations, bees mostly pollinate yellow flowers. This selection by pollinating bees helps keep the most common color in a certain zone dominant, preventing the exchange of genes that are linked to the flower color genes while also making hybrid zones a rare occurrence.

“Even with abundant DNA sequence data, it is often difficult to find exactly why species are different,” says Barton. “Our study is the culmination of years of work, combining fieldwork and population genetics with genetic crosses, and analysis of gene expression.”