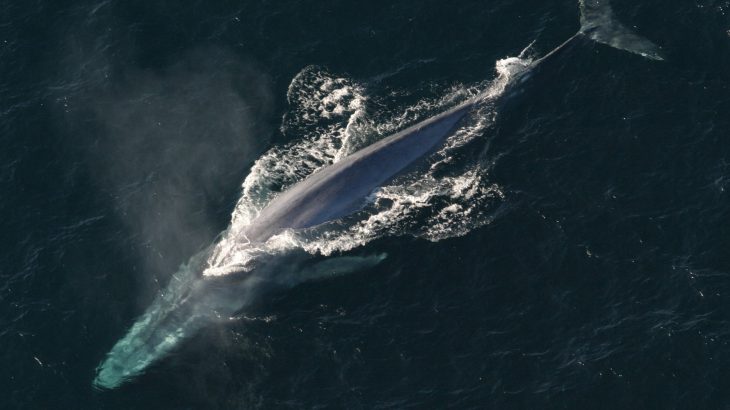 A team of biologists set out to investigate how blue whales respond when they are exposed to sonar. The researchers, led by Brandon Southall from the UC Santa Cruz, discovered that some blue whales stop feeding on deep patches of krill when they encounter sonar.

“The ocean is a big place and it can be easy to miss and lose even the biggest animals ever on the planet, but, because they are so large and have very tall blows, they are actually among the easiest marine mammals to track,” said Southall.

He described how the scientists managed to tag the massive animals in a six meter inflatable boat.

“The driver of the small boat is totally critical, we had one of the most experienced people in the world doing this: John Calambokidis from the Cascadia Research Collective.”

The suction tags recorded the whale’s depth, movement, and sounds in the water. The team generated sonar signals from a boat located about a kilometer away for 30 minutes or an hour. Meanwhile, six trained experts observed the reactions of the whales as the sonar grew louder and then after the noise ceased.

Over the course of five years, the researchers recorded the responses of whales to 42 sonar tests. The information logged by the tags was analyzed and then combined with observations at the surface, to look for patterns and changes in behavior.

Southall was surprised by how different the whales’ reactions were.

“Some whales responded when the sound was barely audible, while others seemingly ignored it and kept feeding at quite loud levels,” said Southall, which he referred to as a “really big deal.”

However, the activity that the whale is engaged in seems to have a bigger influence on how much the sonar disrupts its behavior.

Southall concluded, “Impacts could be minimized by reducing sonar disturbance during periods of blue whale foraging on deep patches of krill in the military’s main training areas.”