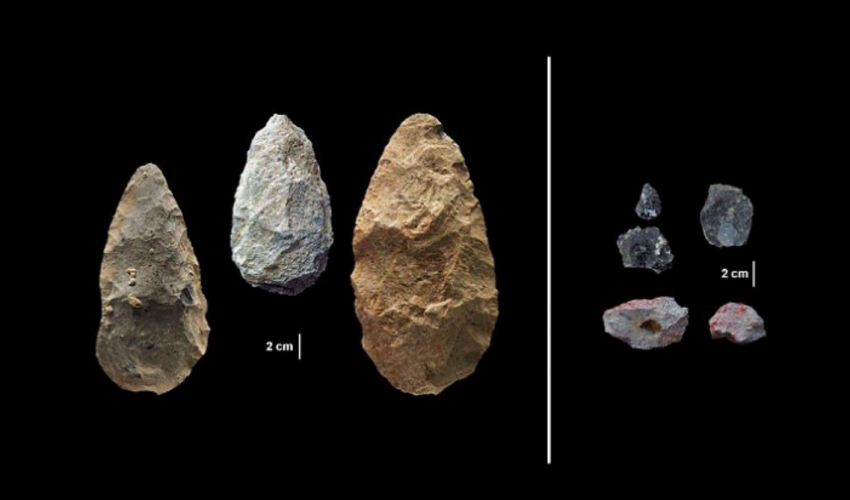 Sophisticated tools used by our earliest ancestors found in Africa

According to the research published in the journal Science, early Homo sapiens transported stones long distances and used colored pigments for symbolic purposes. Major environmental shifts that occurred during the early African Middle Stone Age that might have driven the need for this transport and travel.

After it was revealed that Homo sapiens emerged 300,000 years earlier than records showed, paleoanthropologists excavating around the Olorgesailie Basin in Kenya were able to piece together a new timeline of when sophisticated stone tools were first used.

The excavation yielded evidence of Middle Stone Age tools, complex social networking, and the symbolic and decorative use of pigments long before these behaviors were commonplace.

Small hand axes, tools made with black obsidian, and rocks covered with black and red pigment,  all point to a complex, intelligent, and highly social society that lived, hunted and networked around the Olorgesailie Basin hundreds of thousands of years ago.

Researchers believe that because the obsidian rock was not native to the area, early humans would have had to form a vast social network in order to trade or receive the raw materials they used in their tools.

According to researchers, this is the earliest known evidence of social networks ever to have formed among humans.

At the time these tools were created, there was a major climate shift occurring which may have driven early humans to go beyond their immediate range as a matter of survival.

The social network could have created new hunting opportunities and ways to fine tune tool building and hunting techniques.

The artifacts found in the area, combined with the new evidence of the first homo sapiens, has created a completely new chronology of the evolution of human behaviors.

“This change to a very sophisticated set of behaviors that involved greater mental abilities and more complex social lives may have been the leading edge that distinguished our lineage from other early humans,” said Rick Potts, director of the Smithsonian’s National Museum of Natural History Human Origins program.