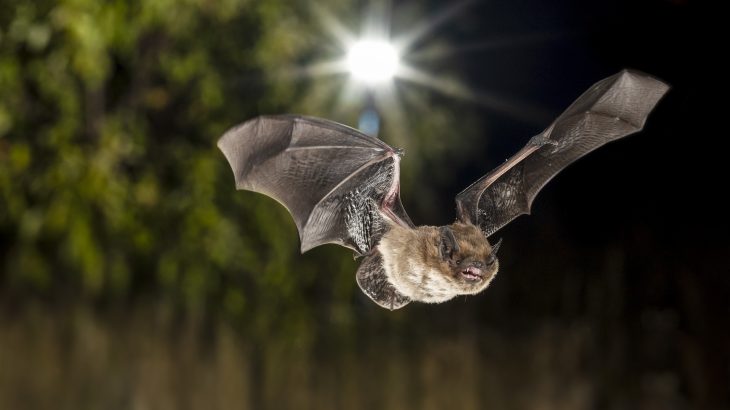 When the sun goes down, we all instinctively reach for the lamps and light switches in our homes, attempting to prolong the light hours and continue our work (or maybe just brighten our current Netflix binge). And while these artificial lights are of major benefit to our lives, they can be a hindrance to the lives of nocturnal animals – particularly in cities, where light is almost constant. However, the effects of artificial light likely varies across species, seasons, and types of light.

Now, a recent study published in Frontiers in Ecology and Evolution from the Leibniz Institute for Zoo and Wildlife Research (IZW) has revealed new evidence of how exactly UV light emitting and non-UV emitting street lamps affect the activity of bats in the Berlin metropolitan area. The study also investigates if tree cover could mitigate the effects of this light pollution.

The researchers found that bat responses to light pollution were complex. “We observed a higher activity of two pipistrelle bat species, the common pipistrelle and Nathusius’ pipistrelle, in areas with high numbers of UV emitting street lamps,” says Tanja Straka, a scientist at the IZW’s Department of Evolutionary Ecology and first author of the study. This may be because these bats are taking advantage of the insects that are attracted to UV emitting lamps. “However, all other species were less active at and even repelled by the lamps, irrespective of whether the light they emitted did or did not contain UV light,” Straka explains.

In this study, the research team considered these effects in relation to tree cover. Bats use trees as shelter during the day, but at night when the street lamps come on, the trees can still provide shade for bats in lighted areas. The researchers’ goal was to determine how tree cover influences bat responses to artificial light.

Results showed that bat response to artificial light was intensified in areas with more tree cover. This may be due to increased tree presence also leading to more insects attracted to the vegetation. But mouse-eared bats were found to be present less in areas with lots of street lamps as well as denser tree cover. It seems that this species is more light sensitive, and avoids illuminated areas even when there is tree cover.

The researchers also observed that high-flying insectivorous bats were more active in areas when light emission from LED street lamps was mitigated by high tree coverage, compared to areas where LED lamps were present with fewer trees. Unlike UV lights, LED lights do no attract insects and so they’re likely less attractive as a foraging area for these bats.

The team collected all of this information through analysis of over 11,000 bat calls recorded at 22 sites in the Berlin metropolitan area. They could identify species through the calls, and used this to calculate the activity of each species at each site.

“The bottom line is that for bats the relation between artificial light and vegetation is complex and it varies between species, yet overall artificial light at night has negative consequences for bats,” explains Christian Voigt, the Head of Department. “Even those species that may hunt at street lamps opportunistically will suffer on the long run from the constant drain of insects dying at street lamps. Trees are important for urban bats, not only as a shelter but also as a source for prey insects. Hence artificial light should be avoided in habitats with many trees.”

Some solutions to reducing the negative effects of artificial lights on these species would be to add trees to the more brightly lit areas, or turn off the lights when the area is not in use. While these lights may be useful for our purposes, we have to remember that we share these areas with species that thrive in the dark.