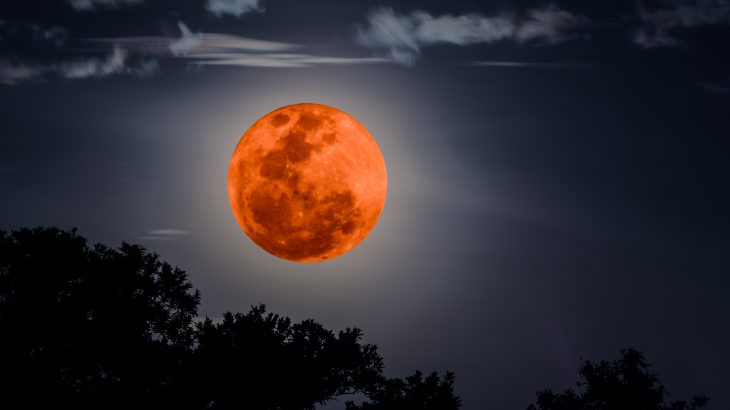 For those of us located in North and South America – as well as a large portion of Europe and Africa – on the night of January 20-21, we will be able to observe a full moon in total lunar eclipse. At this time, the Moon will have a red glow that has come to be known as the Blood Moon.

Because the moon will be at the closest point to Earth in its orbit, it will also be a Super Moon. And to add to the exciting name, January’s moon is known as a Wolf Moon, thus earning this event the haunting title of a Super Blood Wolf Moon.

The full moon will be in Earth’s shadow from 3:34 GMT to 6:51 GMT, beginning with the shadow moving in from the left. According to NASA, the total eclipse will last about an hour. For people located in Europe and Africa, it will be observable just before sunrise, while for anyone in North and South America, the eclipse can be seen at the beginning or in the middle of the night.

While you may know that a lunar eclipse is caused by Earth’s shadow blocking the light from the sun reflecting off the Moon, you may still be wondering why it causes the Moon to turn red. This red color is a result of the same phenomenon that causes sunsets to appear red, pink, or orange as well.

“A little bit of sunlight is refracted by the Earth’s atmosphere and reaches the Moon, bending around the edges of the Earth,” explains Walter Freeman, an assistant teaching professor at Syracuse University’s physics department. “This small amount of red light still illuminates the Moon enough for us to see it. Instead of being bright and white, the Moon will be very dim and red, 10,000 or so times dimmer than usual.”

Total lunar eclipses happen about one to three times per year on average, but there will be a three-year gap between this upcoming total eclipse and the next one in 2022. So if you want to say you saw the Super Blood Wolf Moon way back in 2019, make sure to stay awake this Sunday night.