Supermassive black hole at the center of our galaxy revealed • Earth.com 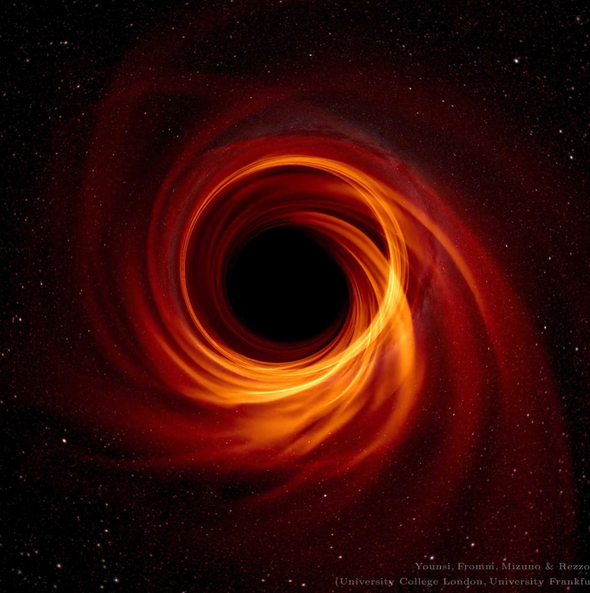 By use of extremely powerful telescopes, scientists had previously seen stars orbiting around something invisible, compact, and very massive at the center of our galaxy. This object – known as Sagittarius A* (Sgr A*) – appears to be a huge black hole located 27,000 light-years away from Earth. Now, for the fist time, astrophysicists have managed to capture an image of this supermassive black hole – which is four million times more massive than our sun – at the heart of the Milky Way.

Although the black hole itself is invisible, glowing gas around it reveals a tell-tale signature: a dark central region – called a “shadow”- surrounded by a bright ring-like structure, which is the light bent by the enormous gravity of the black hole.

“For decades, astronomers have wondered what lies at the heart of our galaxy, pulling stars into tight orbits through its immense gravity,” said Michael Johnson, an astrophysicist at Harvard University. “With the image [captured by Event Horizon Telescope or EHT], we have zoomed in a thousand times closer than these orbits, where the gravity grows a million times stronger. At this close range, the black hole accelerates matter to close to the speed of light and bends the paths of photons in the warped (space-time).”

“We were stunned by how well the size of the ring agreed with predictions from Einstein’s theory of general relativity,” added EHT Project Scientist Geoffrey Bower. “These unprecedented observations have greatly improved our understanding of what happens at the very center of our galaxy and offer new insights on how these giant black holes interact with their surroundings.”

To image the black hole, scientists used the powerful EHT, which linked together eight radio observatories across the planet to form a single, “Earth-sized” virtual telescope. By employing this groundbreaking technology to observe Sgr A* on multiple nights and collect data for long periods of time, the researchers created a library of millions of images which then needed to be interpreted theoretically to assess what type of astronomical objects they had in fact detected.

“To understand how the EHT has produced an image of Sgr A* one can think of producing a picture of a mountain peak based on a time-lapse video,” explained Luciano Rezzolla, a theoretical astrophysicist at Goethe University Frankfurt. “While most of the time the peak will be visible in the time-lapse video, there are times when it is not because it is obscured by clouds. On average, however, the peak is clearly there. Something similar is true also for Sgr A*, whose observations lead to thousands of images which have been collected in four classes and then averaged according to their properties. The end result is a clear first image of the black hole at the center of the Milky Way.”

This breakthrough discovery follows EHT’s 2019 release of the first image of a black hole, called M87*, located at the center of the more distant Messier 87 galaxy. Even though our galaxy’s black hole is over a thousand times smaller than M87*, the two astronomical objects look amazingly similar. Now, the scientists can compare the two to shed more light on how gas behaves around supermassive black holes.

A detailed description of Sgr A* is published in the Astrophysical Journal Letters.