Supersaurus may be the longest dinosaur ever discovered • Earth.com 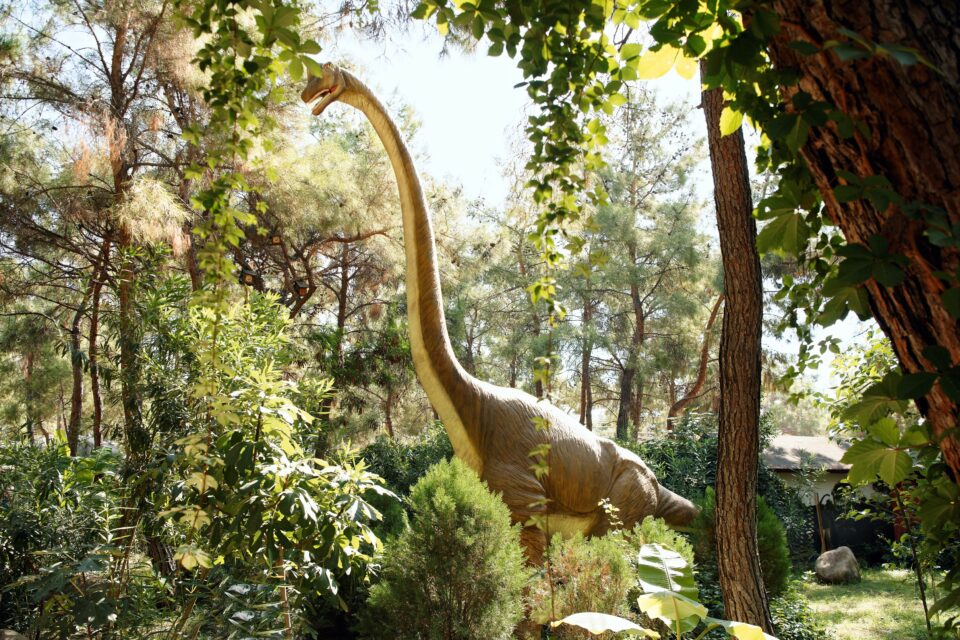 Supersaurus may be the longest dinosaur ever discovered

It is usually challenging to identify the exact proportions of fossil animals that are excavated out of the rock. Seldom is a fossilized skeleton discovered in its entirety. Instead, the component bones tend to be disarticulated, jumbled up, and commonly dispersed by factors such as weather, water movement and scavenger activity.

This was the case when the first specimen of a Supersaurus was uncovered in 1972 in a bonebed at Dry Mesa Dinosaur Quarry in Colorado. Brian Curtice, currently a paleontologist at the Arizona Museum of Natural History, describes the accumulation of tightly-packed fossils originally found in the bonebed as a “bone salad” that made it very difficult to know which bones to allocate to the newly discovered Supersaurus.

Field worker Jim Jensen, who collected and prepared fossils for Brigham Young University in Utah, excavated that bone salad and published his findings some years later. Among the bones that he discovered was an 8-foot-long scapulocoracoid – two fused bones that make up the shoulder girdle in adult dinosaurs and other reptiles. The size of this bone identified Supersaurus as being potentially one of the longest dinosaurs ever discovered. The public was intrigued at the time that a dinosaur larger than Brachiosaurus, then considered the longest dinosaur, could have existed.

Jensen also excavated other large bones that he thought belonged to two other species of sauropod dinosaurs. When he published his findings, in 1985,  in the journal Great Basin Naturalist, he announced the discovery of three new sauropod dinosaurs from the quarry – apart from Supersaurus (that had been named by a journalist in the initial post-discovery media frenzy), he named Ultrasaurus and Dystylosaurus from the bone evidence found in the bonebed.

However, Jensen wasn’t a trained paleontologist, and he made some mistakes with his analysis. This has led to much debate between paleontologists over the years, who have questioned the validity of the two other new genera. Some, such as Curtice, believe that the bones were misidentified and actually all belong to a single Supersaurus skeleton.

Curtice said Jensen’s theory that the bones belonged to three different dinosaurs never checked out. “He was caught up in the moment,” Curtice said. “He wasn’t classically trained.”

Now, some 50 years after the initial discovery, Curtice has re-evaluated some of the original bones, as well as looking at bones that have been excavated subsequently from the large blocks of rocks and fossils that were transferred at the time from the quarry to the laboratory. He has also compared all the bones with those of two other fossilized skeletons of Supersaurus (nicknamed Jimbo and Goliath) that have subsequently been discovered in Wyoming.

He feels there is a good case for reclassifying Jensen’s three species as a single one, namely Supersaurus.

Among the as yet unstudied bones from the rock blocks, Curtice identified five new neck vertebrae, one new back vertebra, two new tail vertebrae and a left pubis bone. This gave him a more complete picture of the skeleton of Supersaurus and helped him estimate the overall length of the beast more accurately.

However, many of the bones have still not been excavated, or are missing from the deposit, so determining the overall length is still a challenge.

“It should have 15 or 16 neck bones and we have six of them,” Curtice said. “So the big challenge is ‘Wait, which six do we have?’ They don’t come with numbers on them.”

Curtice found that the vertebrae became smaller by a certain percentage the further they were from the body, and this allowed him to estimate the lengths of the missing bones. He calculated that, depending on the placement of one nearly 4.5-foot-long (1.3 m) neck vertebra, Supersaurus measured either 128 feet or 137 feet in overall length.

“That is a crazy length – longer than three yellow school buses, nose to tail,” Curtice said. “And considering we never find the largest individual in the fossil record, how much longer could these animals have gotten?”

The other, more recent fossil Supersaurus discoveries, Jimbo and Goliath, supported Curtice’s estimates of length. “What’s shocking to me is how close in length Goliath and Jimbo are,” said Curtice. “If you get three animals that are within a few feet of one another, now we know, ‘OK, that’s the average.'”

Unfortunately, researchers have yet to formally identify Goliath as a Supersaurus in a peer-reviewed journal and, until that time, including its measurements for comparison can only be tentative.

The conclusions drawn from the new research “seem reasonable,” said Matt Lamanna, a vertebrate paleontologist at the Carnegie Museum of Natural History in Pittsburgh, who was not involved with the research. “I can’t really weigh in on the exact length estimate, but it’s clear that there is a very, very large diplodocid sauropod in that quarry.”

The research would be strengthened if the dinosaur nicknamed Goliath were to be formally identified as a Supersaurus, especially because Curtice is using it to inform his analysis, Lamanna said. “I think the final verdict will come when this Goliath specimen is published, when this additional material from Dry Mesa is published. I want to see it go through formal peer review.”

“I think it will be pretty exciting when he does [publish],” Lamanna added. “I think he’s very probably correct.”

While he awaits the publication of the identity of Goliath, and the peer review of his own research, Curtice presented his findings at the annual meeting of the Society of Vertebrate Paleontology earlier this month. Even the “shorter” size estimate of Supersaurus is record-breaking; at 128 feet (39 m), the dinosaur would have been longer than other contenders for this record. And with a neck of at least 50 feet long (15 m), Supersaurus already holds the record for the dinosaur with the longest neck. One thing is for sure though, when Supersaurus wandered the plains of Colorado and Wyoming, some 150 million years ago, it was an exceptionally large animal.

In conclusion, Curtice states that Supersaurus may be the longest dinosaur on record, but it’s not the heaviest. That honor likely goes to the superheavy titanosaur Argentinosaurus, which weighed upward of 90 tons (82 metric tons) and came close to being twice as heavy as Supersaurus was.