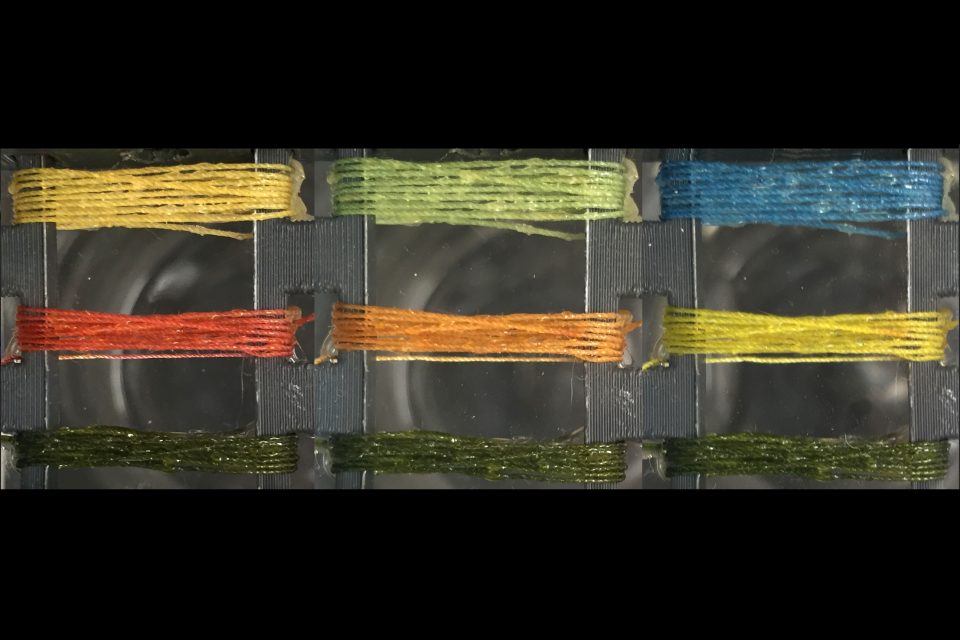 A team of engineers at Tufts University has created dyed threads that are designed to change color when they detect a variety of gases. The color changes can be detected visually, but can be interpreted even more precisely by using a smartphone camera.

According to the study authors, the safety threads could be woven into clothing to detect gases in medical, workplace, military, and rescue environments. The goal is not to replace electronic devices commonly used to detect volatile gases, but to provide a method of gas detection that requires no equipment or specialized training.

The experts established a three-step process that “traps” the dye in the thread, including the use of polydimethylsiloxane (PDMS) to physically seal the thread and dye. The PDMS creates a flexible seal that is also gas permeable, allowing the analytes to reach the optical dyes.

Study co-author Sameer Sonkusale is a professor of Electrical and Computer Engineering at Tufts University’s School of Engineering.

“The dyes we used work in different ways, so we can detect gases with different chemistries,” said Professor Sonkusale. “But since we are using a method that effectively traps the dye to the thread, rather than relying so much on binding chemistry, we have more flexibility to use dyes with a wide range of functional chemistries to detect different types of gases.”

The way the dyes changed color during testing was dependent and proportional to the concentration of the gas as measured using spectroscopic methods. Smartphones could be used to quantify the color changes or interpret color signatures using multiple threads and dyes. “That would allow us to scale up the detection to measure many analytes at once, or to distinguish analytes with unique colorimetric signatures,” said Professor Sonkusale.

Study lead author Rachel Owyeung is a graduate student in the Tufts Department of Chemical and Biological Engineering. She explained that the threads even worked under water, detecting the presence of dissolved ammonia.

“While the PDMS sealant is hydrophobic and keeps water off the thread, the dissolved gases can still reach the dye to be quantified.” said Owyeung. “As dissolved gas sensors, we imagine smart fabrics detecting carbon dioxide or other volatile organic compounds during oil and gas exploration as one possible application.”