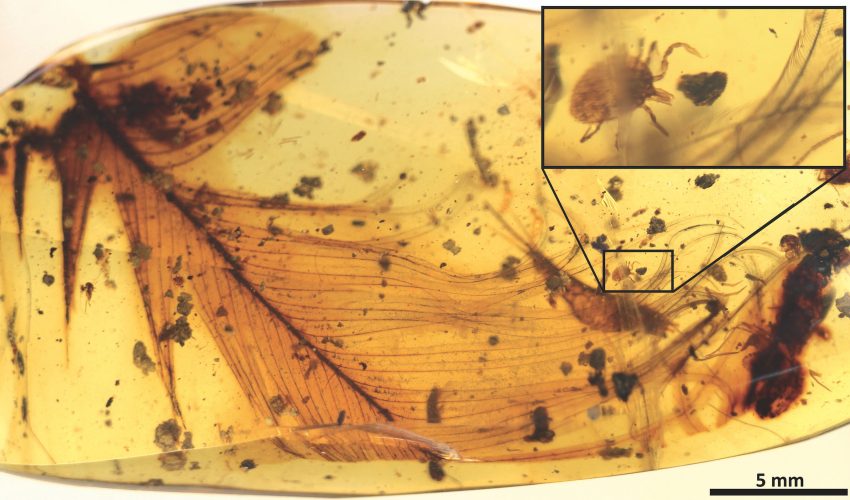 In the 1993 film Jurassic Park, scientists create dinosaurs by extracting dino DNA from mosquitoes trapped in amber. It turns out that fiction may not be far from reality.

A new report published in the journal Nature Communications examines ticks trapped in amber that date back millions of years and reveals how these blood-sucking parasites thrived as far back as the Cretaceous period.

Inside one particular piece of 99 million-year-old Burmese amber, researchers found both a hard tick and a feather.

Rarely do researchers find examples of fossil parasites and their hosts, so the find can reveal a great deal about dinosaur-parasite relationships.

The feather that the tick was found clinging to indicates that the parasite’s host was a feathered dinosaur. Even though researchers can’t identify the host from its feather alone, the Cretaceous amber specimen is the first and oldest of its kind that clearly shows that ticks fed on feathered dinosaurs.

“Ticks are infamous blood-sucking, parasitic organisms, having a tremendous impact on the health of humans, livestock, pets, and even wildlife, but until now clear evidence of their role in deep time has been lacking,” said Enrique Peñalver, the lead author of the study.

The researchers examined several pieces of Burmese amber with ticks fossilized inside and found that some of the ticks belonged to a recently discovered, long extinct, group of ticks.

The reason the researchers can’t identify the host using the blood that the ticks had fed on in the amber specimens is that for some of the parasites, their composition was changed as the amber and other mineral deposits formed together, rather than just being encased in pure tree resin.

Analyzing the specimens trapped in amber yields more than just the host-parasite relationship of ticks and Cretaceous dinosaurs. The tick fossils prove that even after the mass extinction that wiped out the dinosaurs, ticks and parasites thrived and have been around for hundreds of millions of years.